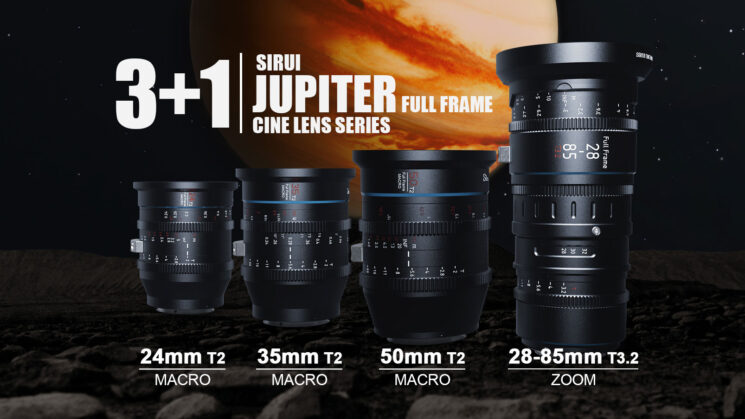 Sirui has announced a new line of full-frame cine lenses known as the Jupiter series. The line is kicking off with four lenses including a 24mm T2, 35mm T3 and 50mm T2 prime lenses, all of which are macro lenses, as well as a 28-85mm T3.2 full-frame cine zoom. And, like pretty much all Sirui lenses, they’re being crowdfunded and launched via Indiegogo.

The three primes match each other in physical dimension, for easy switching out on camera rigs, with what they say is minimal focus breathing and will have a 92mm filter thread. The 28-85mm T3.2 zoom is a parfocal lens, so doesn’t require focus adjustment as you zoom in and out – very handy for ensuring focus and then pulling back to compose your scene.

All of the lenses feature an 11-blade iris and a minimum aperture of T22. They’re also all available in either PL or EF mount and adapters will be available for Sony E and Canon RF mounts. The three macro primes all offer a minimum focus distance of 24cm and the 24mm, 35mm and 50mm T2 lenses have focus throws of 202.4°, 200° and 220° respectively. Sirui says they offer “great bang for the buck” and offer excellent optical performance and solid build quality.

The Sirui 28-85mm T3.2 is a parfocal full-frame cine zoom lens that keeps its focus as you rack through the focal length range. It has a minimum focus distance of 70cm and a focus throw of 256°. It takes 110mm filters and has a large 44mm image projection circle – much larger than full-frame – which potentially allows use on larger sensor cameras like the Arri LF and medium format mirrorless cameras from Hasselblad and Fuji – of course, you’d need to find your own adapter for those. 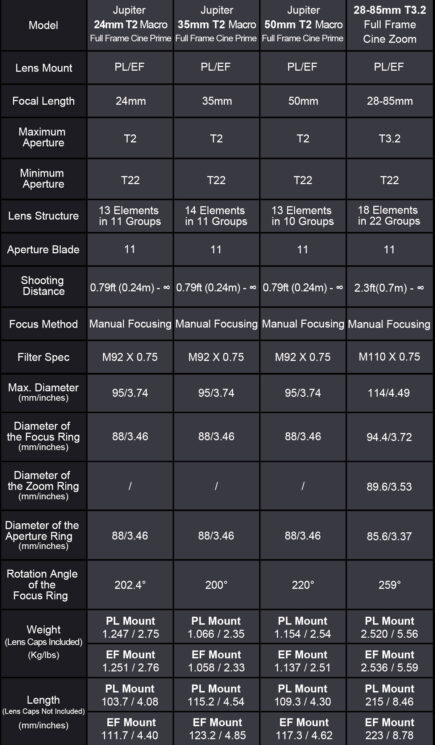 As mentioned, the lenses are being launched via Indiegogo. The campaign goes live on May 9th, and early bird prices on the three primes will be $799 each (which goes up to $999 once they go retail). The zoom will be $2,319 for early birds on the campaign and will be priced at $2,899 retail. The set of all four will have a retail price of $5,499 which gets dropped to $4,399 for the campaign while EF to RF and E adapters will be $79 – which goes up to $119 retail once the campaign’s over.

You can sign up to be notified when the campaign goes live here and to find out more about the lenses, head on over to the Sirui website.

« This 12-minute talk will help you embrace fear as a photographer
YouTuber’s plane crash deliberate for video, says FAA »