It is not often that I see a picture and get my eye wet with nostalgia. However this one from David Sittig hit a soft spot for me (click here for lightbox view). Having a Kiev 88, a Seagull 4A and a Minolta SRT 101 in the same shot should be good enough on any given day, but David made the extra step of making it a TTV (Through The Viewfinder) photograph featuring the Minolta and Seagull in the Kiev’s viewfinder.(Final image, just in case you care for this kind of thing, was taken with a D90)

I asked David to share the process of taking this image with DIYP readers and much to my delight he said yes: 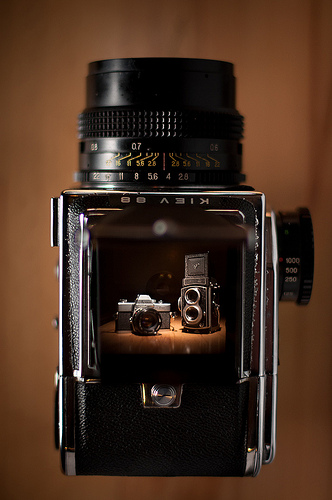 After I got interested in old analog cameras I didn’t take any complex photo with my digicam for a while. I bought a few old analogs on eBay and learned to take pictures the old-school way. I now own three analog cameras: a Kiev 88, a Seagull 4A and a Minolta SRT 101. (By the way: this makes a lot of fun! You should really try it if you only photograph digitally until now!)

Since I think those old ladies look pretty good, I thought it would be great to have all of them in one nice picture. This was reason enough to take out my young digital girl again ;-)

I didn’t think a lot about how the picture should look exactly. I like the process of arranging and re-arranging everything until the result rocks quite more than sitting around thinking. I’ve had some great ideas in the stage of creating – or let’s say: finding – the photo. Maybe that’s what some people call a creative process :-)

However, while doing all this “Creative thinking” I had the idea of taking a TTV (Through The Viewfinder) photo. I really like the huge view-finder of the KIEV88 and the way everything appears through it (although sometimes I really hate this cam for it’s horrible transport-mechanism…) and I’ve not seen a picture done quite like that before – so I decided to go ahead and make my picture.

The special thing about this alignment was that I had two “separate” setups to arrange. The KIEV point of view and the D90 point of view.

The first setup is the view-finder of the KIEV88 pointing at the other two cameras. This one had to be arranged first and composition and sharpness had to be adjusted. This was quite easy since all three cameras stood directly on the floor.

The next setup was the D90 pointing at the KIEV88, that was a bit more complex. The camera had to point directly down to the KIEV88 at a 90 degrees angle. Since I do not own a tripod with a tiltable center column I had to improvise a bit to get it in the right position. I connected the center column from a tripod with a SuperClamp to a second tripod which worked quite well for me. 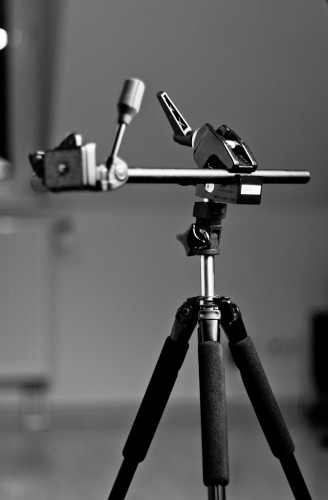 I wanted to take the picture with my 50mm lens on the max aperture of 1.4 since I really love the resulting look the very narrow depth of field creates. This means lots of ambient light would be hitting the sensor. I got the shutter speed as high as I could before meeting the strobe sync limits, and it was not good enough to block the ambient. Plan 2 – use an ND filter. Unfortunately, I did not have a filter with the right thread size for my 50mm, so I had to take my large ND8 and attach it with some sticky tape. Easy and effective :-) 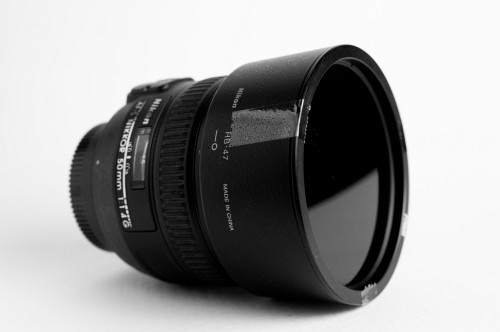 Once all cameras and angles were set up completely, I could pay attention to the lights.

My idea was to illuminate the two old cameras in a spotlight-way since (a) I love the resulting look and (b) the messy background ( = my room) sinks in a wonderful black:-)

To achieve the narrow light I’ve put a DIY-grid which I built of straws and cardboard over my SB28. 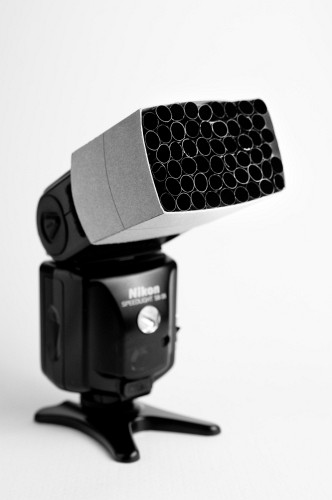 Now I could take the first shots to set the intensity and the angle of the light from the first flash. I got that nails after a few shots, with setting the NDed D90 on 1/90 and the SB on 1/4 power. Now it was time to set the light for the KIEV.

For me it was important that the KIEV was lit by a soft light from both sides. Moreover I wanted those wonderful chrome applications to be highlighted.

Since the only diffuser I had around was my 26″ softbox, which is way too big (in relation to the tiny KIEV), I had to trick a little to reduce the effective size of that giant. I clamped two sheets of black paper on the softbox to reduce the size to about 10″ which worked fine. 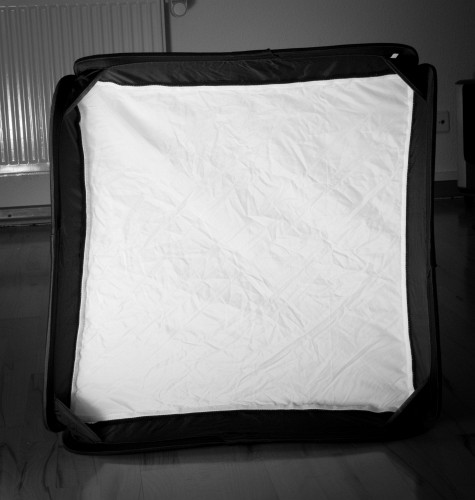 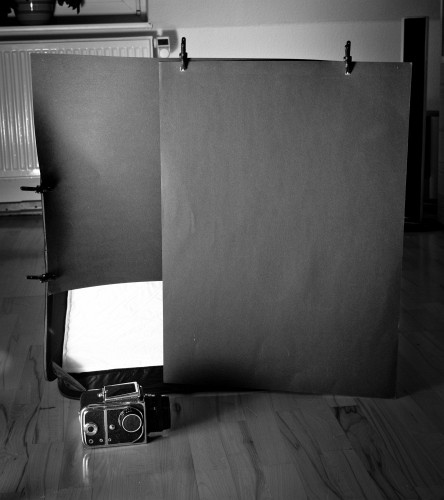 To get the specular highlights on the other side of the Kiev, I placed a big white cardboard to reflect the light from the softbox to the camera. After some further adjustments on the flashes I was very happy with the result so that the final picture could be taken.

Here is an image of the entire setup: 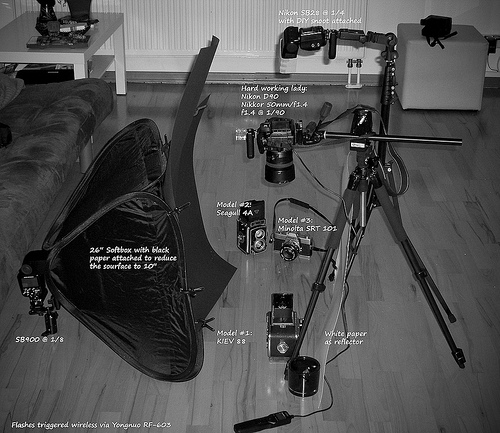 Post was kept at minimum and consisted of a small curves adjustment in Light room. 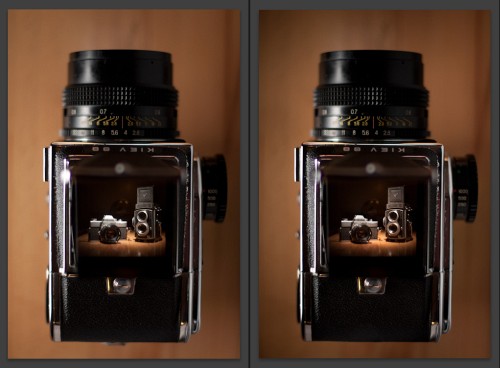 Shooting the Team – Surf’s Up

Photographing Pigments Can Kill Your Vacuum + Tip On Shooting Flour