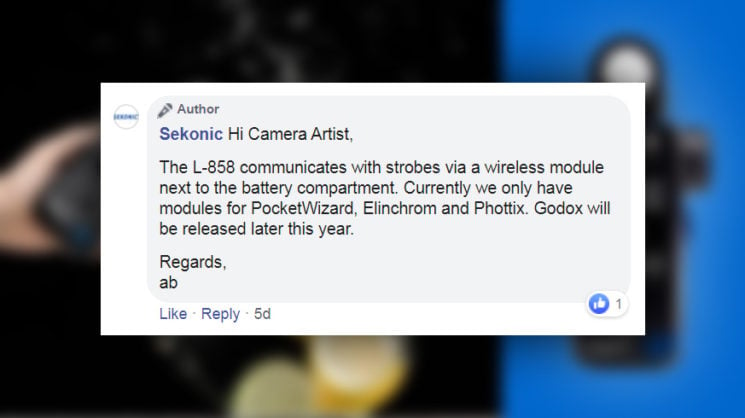 Last year, Sekonic put out a questionnaire on their Twitter feed asking if anybody was interested in them looking into the possibility of creating a Godox module for their light meters. It was suggested at the time that the two possible options for a Godox module would be their flagship L-858D and L-478D light meters. It’s been pretty much radio silence ever since, though. Until now.

After a user commented on one of Sekonic’s posts on their Facebook page that they were having issues getting their Sekonic L-858D-U light meter to talk with their Godox AD600, Sekonic responded with some positive news. Yes, that’s right, that Godox module is finally being released, and it’s coming this year.

There was no mention of the L-478D in the post. Whether that means potential plans for a Godox module for that meter have been scrapped or Sekonic is still planning a module for that at some point in the future as well is unknown.

It’s not quite the big official announcement some of us have been anticipating, but it’s the first bit of news we’ve seen on Godox compatibility with Sekonic’s light meters in a while. It’s nice to hear that it’s actually on the way!

Time for me to get saving to replace my L-758DR, I think!

« This is why black & white film is more expensive to have developed than colour
H.266 is coming and your video files will be half the size they are with H.265/HEVC »