But who wants to be just another monkey? 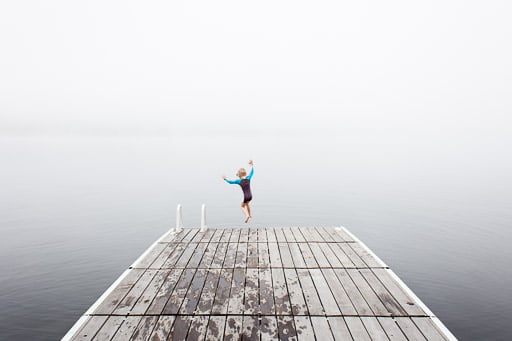 Speaking of an infinite number of monkeys…sometimes a moment just smacks you in the face and all you have to do is show up and press the button.

For example, a couple of weeks ago, I’m at a friend’s cottage, peacefully sleeping in my tent after a late night of leftover cheesecake, an epic Settlers of Catan game and several rounds of mystery cottage booze.

In other words, I was really tired and really cozy in my sleeping bag and not planning on going anywhere for a really long time.

So…at the crack of dawn, my wife (well actually, it was closer to eight o’clock, but it might as well have been dawn, and yes my wife’s name is Dawn, and no, the waking to the crack of Dawn joke is not new)…so my wife, elbows me in the head and says something along the lines of:

Now, I think it should be clear that I had pretty much ZERO intention of getting up for anything, let alone taking some photos of the lake.

I mean, I’m a night person.  I despise morning and everything that goes along with it.  Nothing good ever happened in the morning.

But, just to see what the big deal was, I rolled over and stuck my head out of the tent.

Because, what I saw was the lake covered in this absolutely perfect morning mist.

So now I’m sitting there looking at this perfect misty lake, and I’m thinking, ya…it’s nice, but my sleeping bag is pretty nice too, and all of a sudden this photo clicks into my head.

I literally swore because I knew that had no choice but to get up and make that picture.

Perfect, misty lakes don’t wait around for lazy ass hung-over photographers to get their shit together.

The first thing I needed (besides my camera of course) was a model.

Luckily, she was just going back to sleep beside me.

So I (gently) elbowed her in the head, and said something along the lines of:

And she literally swore.

And then she complained that she looked like crap because she just woke up and she didn’t have any makeup on. 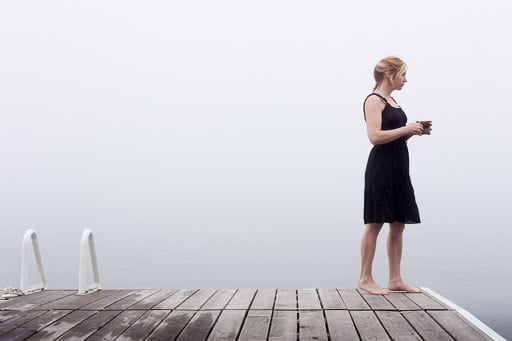 Since the whole thing was her idea, I promised that it would only take a few minutes to get the shot, and that they would be wide angle, so nobody would be able to tell that she looked like crap.

I ran up to the cottage to grab a suitable coffee mug for a prop (ie. cottagey looking without logos) – and then she literally swore again, because I neglected to fill it with coffee.

But, within two minutes we were down at the dock, ready to make some killer photos.

I knew exactly the photo that I wanted to make.  I knew that there was a great aged wood dock extending out into the lake that would be the perfect setting.  I knew from which direction the sun was rising, and that the direction of light would be perfect (even though it was gray and misty, the light still has a direction)…except, I forgot that there was a boat tied to the end of the dock.

At first, I tried to just frame my photos so that the boat was not in the frame.  But, that wasn’t the shot that I really wanted.

The shot I really wanted was wide angle, symmetrical, and without any annoying distractions.

So I hastily untied the boat and gave it a shove out into the lake and out of the frame. 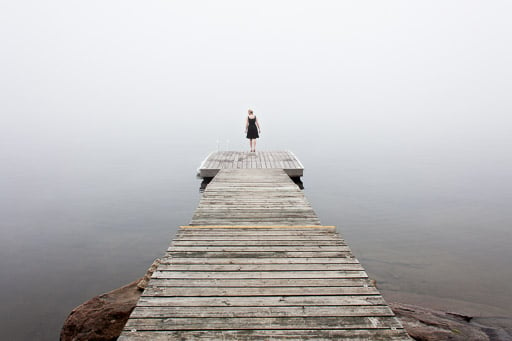 At this point, I was pretty pleased with myself.  I had the shot I wanted in the can – but the mist was still there.  You just can’t let perfectly good lake mist go to waste.

I thought that it would be pretty cool to actually be in a photo, so, I recruited a nearby morning person who was aimlessly wondering around.  They were more than happy to step up and push the button while Dawn and I did our best Singing Butler impression. 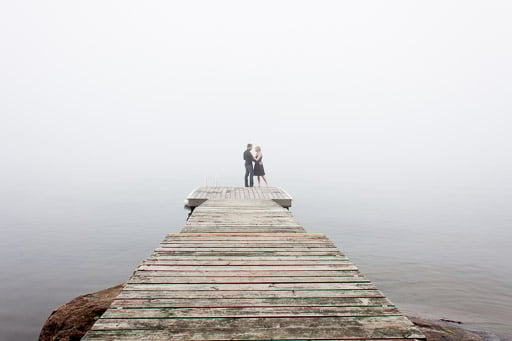 By then, I knew that there was limited time left with the mist.  A few wisps of wind were stirring and it was getting brighter.

But another photo clicked into my head.

I wanted to get a photo of my kids jumping off the end of the dock into the misty lake.

So I ran back up to the tent to wake them up.

She literally swore, then went back to sleep.  No amount of prodding or pleading would get her up.

So, I defaulted to Plan B – the good old genetic insurance policy second child.

My son, who is five, woke up like a bullet and was down at the lake with his bathing suit on in 10 seconds; although, he did somehow manage to secure a promise of ice cream for breakfast somewhere along the way.

I should mention that the conditions that produce perfect misty lakes are cold air sitting on top of warmer lake water – which is a long way of saying that it was a pretty cold summer morning and the lake wasn’t much warmer.

I knew that I would only get a jump or two out of the dude, but at least if he ended up with mild hyperthermia he would want to go back to bed when we were done, and I could sneak in a little nap myself. 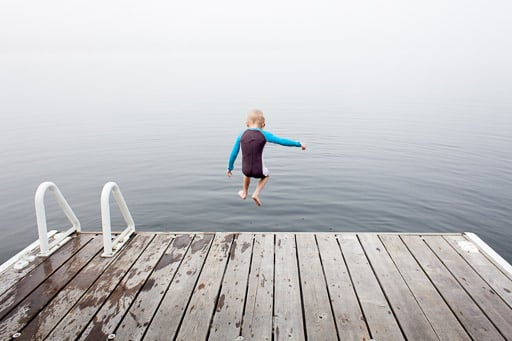 Just a few minutes after we were done, the sun came out, the wind picked up and the lake turned back into a normal lake on a normal sunny summer morning.

The whole session probably lasted less than 20 minutes between the time I first got up to the time I brought a shivering little boy up to the cottage for a warm shower.

It was at that point that I realized the boat was missing, which resulted in an impromptu swim halfway across the lake to rescue it.

But you have to seize the moment – carpe occasionem!

(And no, I have no idea how bad that latin translation is.) 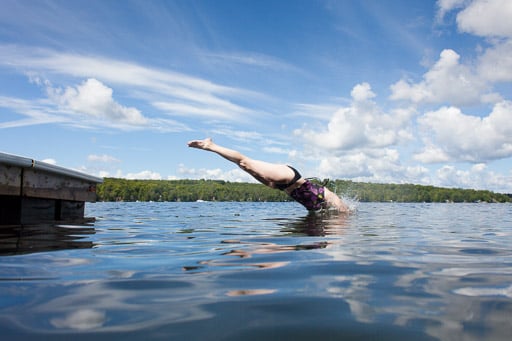 Anticipating the moment and seeing the shot before it happens