Remember when I wrote about Quintessential Moments? It focused on benchmark or definitive moments in our growth as photographers. Maybe it was a photograph where a new concept fell perfectly into place. Maybe it was an image that had a profound impact on you– or someone else. One thing that I mentioned in passing at the end of the article was that you can’t force these moments. You can’t stack the deck and artificially create a defining moment.

I should have taken my own advice this past weekend.

Dragon*Con once again came to town, and with it came its annual parade. I have a pretty healthy comic book and sci-fi nerd streak in me, so it’s always a good time wandering around with my camera, getting fun shots of people with perhaps…well, let’s just say they take their love for these characters way more seriously I do. Way, WAY more seriously. And come on– who doesn’t love a parade?

Anyway– back to the point. At last year’s parade I got two or three really cool shots of Spider-man. There were many Spider-men, but this was the real guy. Peter Parker in the flesh. Turns out, one of the photos won a contest a few weeks later and garnered a bit of attention. From the time our paths crossed to the time I conceived the shot, got him where I needed him, fired twice, re-posed, and fired twice more, a grand total of about a minute and half had passed. Photo shoots weeks in the planning hadn’t gone as smoothly as this.

A large print of the shot below hangs in my son’s bedroom, so I see it every day. Not too long ago I had a great idea for another shot. All I was missing was Spidey.  I was determined to find him at this year’s parade staging area and get the image. Simple, right? How difficult could it be to find the right Spider-man in a sea elves, orcs, stormtroopers, rebels, steam punks, and superhero wannabes? 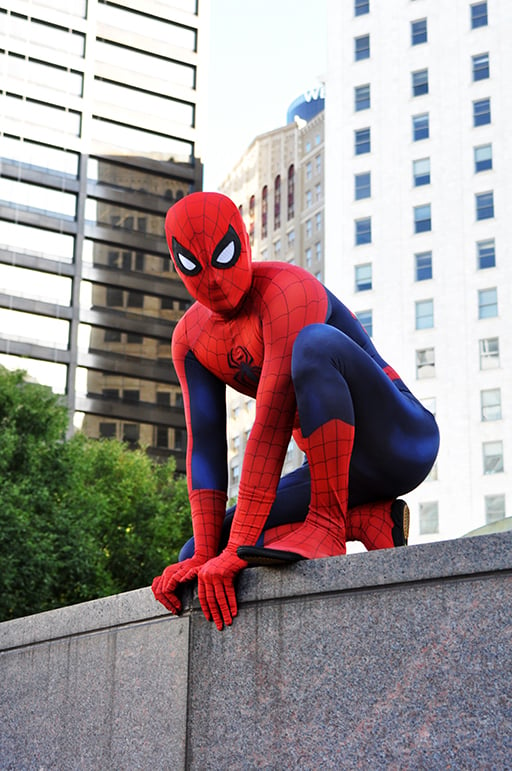 Obviously, I didn’t find him. I broke my own rule about forcing the moment. I got so wrapped up in getting that one shot that I don’t even want to think about the shots I’m sure I missed.  The moments that might have been had I just let things naturally unfold in front of me, rather than artificially trying to create them.

When it comes to my photography, I’m my own worst critic. It’s rare for me to walk away from a photo shoot completely satisfied. Even when I am satisfied, chances are that when I look at the images again a week, a month, or a year later I’m not going to be very happy with any of them. Or at least not as happy as I was. Always looking ahead– hopefully learning a thing or two along the way.

I think all of this really hits home for me with my street and candid photography. In the studio we plan. We diagram. We adjust. While there are a few street photographers out there staging their scenes and images. I think the vast majority of us are observers. I may have an idea I hope to capture, but I am usually content to sit back and wait. To observe and let things unfold around me with perhaps just a little direction from time to time. If you knew me better, you’d know how ironic this is, considering how overwhelmingly impatient I tend to be.

Forcing the moment (almost) never works. It’s okay to have a goal or an idea– a concept– in your head and run hard with it. But while you’re running with it, make sure you keep your eyes and mind open to the other possibilities around you. They won’t always be defining moments, but they don’t have to be.

Maybe realizing that and being comfortable with it is its own defining moment. Just something to think about.

3 Benefits of Keeping a Photography Journal

Impatient Patience…Keeping The Momentum While Learning the Ropes

« Want To Get Your Subjects Comfortable In A Shoot? Get Them In A Shower
Seize the Moment – A Photographer’s Parable »