About 8 month ago, we shared an interview with Benjamin VonWong about his work in this video:

It’s the story of Eliza O’Neill, turned 5 years old a few days ago (Happy Birthday, Eliza!).
She was diagnosed one year ago with a rare terminal genetic disease, called Sanfilippo Syndrome–Type A. Her parents were told that they would have to watch her daughter fade away before their eyes.

But there was a little light at the end of the tunnel:

The research conducted points to this clinical trial being the answer to stopping this disease, which means the only thing standing between Eliza and her miracle, is money. The trial is lacking funding to make the medicine, administer.

So the O’Neill’s planned to make a (hopefully viral) video and start a GoFundMe-Campaign to pay for that cure.

What would you do if you knew that money was the only thing standing between your child and their chance at a full and happy life? What would any parent do?

Today, the fundraising reached the goal.

I am sure a lot of you guys already heard about the campaign – after all it started with the help of some Photographers.

At first there was DL Cade (PetaPixel) asking Benjamin VonWong, who did an amazing job with that video. After a few weeks, SmugMug started a very clever “buy a print – help safe a live“-project, with the top photographers of our time. The hall of fame (each one generated more than 400$) could be my personal “favorite Photographers”-List as well: Bill Geckas, Benjamin Von Wong, Dave Brosha, Julia Kuzmenko, Robert Hall, Renee Robyn, Danielle Tunstall, Joel Robinson… The list is much longer –  this is just the gallery of  “the 12 most effective”. 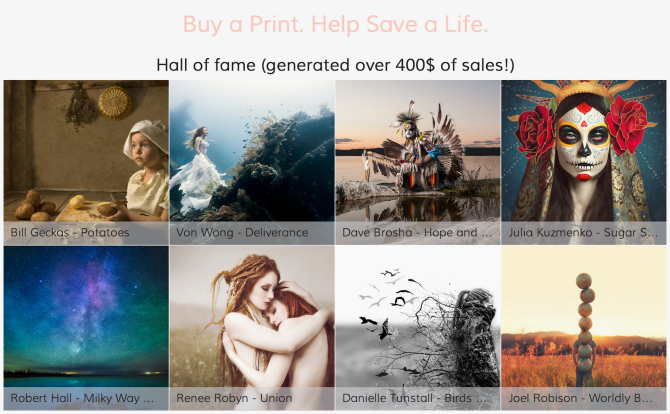 I am very happy to see a lot of friend help and contribute to make this happen. Now we keep our fingers crossed and say: Stay strong little Eliza!

« Is It Ever Okay To Add A Lens Flare In Photoshop? Yes, And Here’s How To Do It
Thomas Shahan Shares His Methods In Macro Photography »