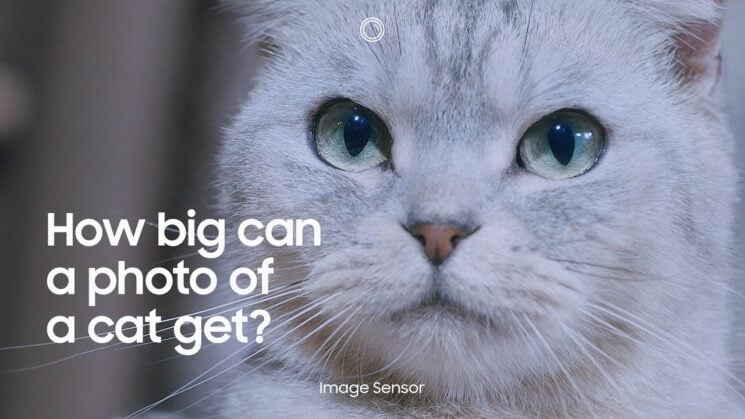 What is the internet best used for? You could argue that it’s sharing cat photos. Along this theme, Samsung chose a feline subject to demonstrate their 200-megapixel smartphone sensor. And they didn’t just demonstrate how good it is, they decided to blow up the captured image and display it on the side of a building, in gigantic furry detail.

Although the sensor hasn’t yet made it into the consumer phone market Samsung has evidently already decided to hype up the new sensor and wasn’t deterred by printing the image to a staggering 2,021 square feet.

The irony of the subject matter obviously isn’t lost on Samsung who asks “How big can a photo of a cat get?,” in their promo for the 200MP ISOCELL HP1 sensor.

The sensor was announced in September last year and features new pixel binning technology which they’ve named ChameleonCell. Allegedly, with this technology extreme detail can be preserved, even after cropping or digital zooming, and this may well be true, every whisker is in perfect detail.

But it was a challenge demonstrating a camera that is yet to be incorporated into an actual phone. Photographer Hyunjoong Kim was given the task and had to make do with using the test board in order to capture the image.

“Choosing a cat as our subject was a difficult decision. It gave us a lot of obstacles to overcome, such as capturing such an active subject with a test board. However, the team concluded that the subject should be something that would show off a high level of detail and that was a popular photography subject at the same time,” says Minhyuk Lee, an engineer from the Sensor Solutions Team at Samsung.

However, the sensor was incorporated into a rig that used a variety of lenses, so isn’t really a true depiction of how images shot on a phone with the sensor could look.

Once the image was taken it was printed in various portions which were then posted up onto the side of the building. It’s interesting because due to viewing distance, billboards actually don’t require such massive resolution for them to appear to be sharp. However, it’s clear from this that you could stand right up next to the Samsung cat image and see the image in full resolution, even at this size.

It will be interesting to see how the sensor performs within the body and lenses of a smartphone once the first phone is launched that adopts the technology. But we probably won’t have to wait more than a couple of months as it looks likely that Motorola will be releasing a new smartphone in two months’ time using the Samsung 200mp sensor.