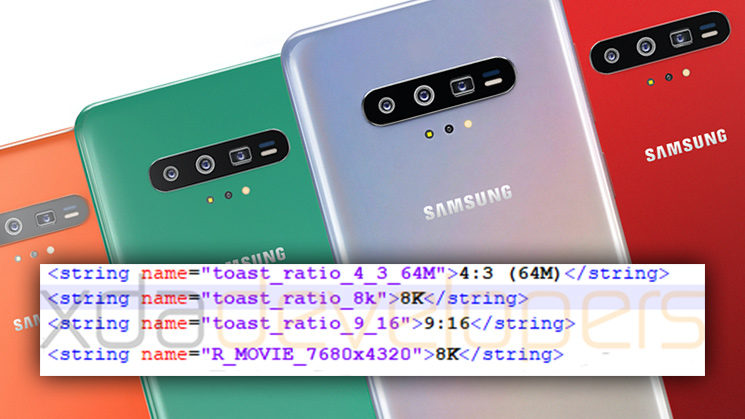 It looks like the race is on. After Xiaomi’s code was torn apart recently, suggesting that they’re working on a phone capable of shooting 8K 30fps video, it looks like Samsung’s S11 may be capable of the same. The team at XDA Developers, the same team that delved into the Xiaomi, has found hints that the S11 will bring 8K video after looking at the latest Samsung Camera App (presumably one that fixes this problem, too).

They do stress that just because evidence may exist in an Android Package (APK) file does not mean that it will necessarily come, as these features are currently unimplemented and may be pulled at any point in the future. But that it’s appeared now in two major competing manufacturers smartphones does seem to suggest that it’s on the way at some point.

Although still only rumoured, the Samsung Galaxy S11 is expected to utilise Samsung’s newest 108-megapixel camera sensor. This sensor is already in use in phones from Xiaomi, and others will likely come quite soon. XDA Developers says that the code backs up the use of the 108-megapixel sensor, but, again, it’s still not officially confirmed. It would be silly, though, I think, for Samsung to release a new flagship phone and not use it.

XDA Developers also found a reference to a 20:9 resolution, suggesting that the Galaxy S11 might have a 20:9 display. It may be for a different phone entirely, although it seems they are at least working on a phone with an ultra-widescreen display, presumably devoid of any interference from cameras and buttons.

The idea of 8K video in a smartphone sounds ridiculous, but then so does a 108-megapixel sensor for stills. But, for stills, they typically utilise a “Quad Bayer” type system where four pixels are combined to form each final pixel in the image. 8K footage might allow us to do the same for video, to produce better quality 4K footage – even if we have to do it in post and not in-camera.

Could the Quad Bayer concept be coming to smartphone video?

« If you want to be a family’s social media photographer and do their chores, here’s a job for you
FiLMiC launches Firstlight, its new iOS camera app dedicated to still photos »