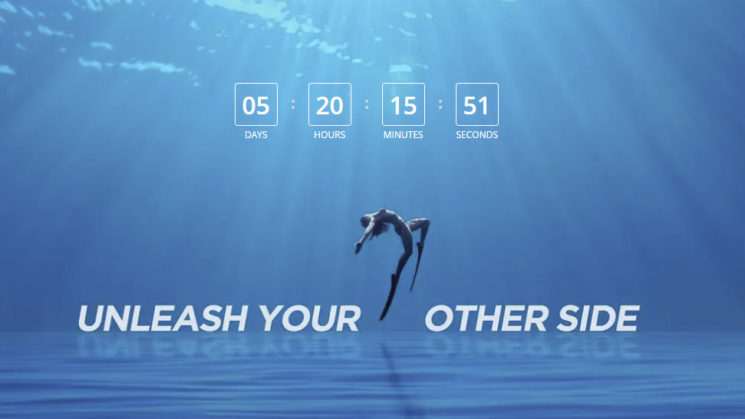 A new teaser has popped up on the DJI website for… I don’t know what. Something. Possibly the rumoured new DJI Action Camera, possibly something completely different. Launching with the slogan “Unleash your other side“, whatever it is will be coming in five days and 20 hours.

Assuming it’s not just illustrative and metaphorical, the picture on the new teaser page suggests that it is possibly something that can be used underwater. If DJI is looking to release an action camera to compete with GoPro, then it’d need to be usable underwater.

And if DJI is releasing an action camera, it could become a very serious threat to GoPro as a company. They’re already struggling. They have been for years, that’s no secret. And DJI tends not to enter markets where they don’t already feel confident that they’ll dominate.

And in order to dominate, any action camera DJI releases would have to be at least 4K at 60fps, 1080p at 120fps (ideally 240fps), offer full manual controls, a touchscreen LCD (that works underwater), have stellar image stabilisation (electronic, most likely), high bitrates, facial recognition, live streaming and all of the other things GoPro already offers, and then something else on top.

Perhaps it’s even more features? Better image quality? A better price? That last one’s doubtful given DJI’s pricing history against competing products. The original DJI Osmo Mobile wasn’t exactly cheap compared to the competition from Zhiyun, Feiyu and other gimbal manufacturers. But, if it is more expensive, I’ve no doubt they’ll release something that’s worth it.

That bit about unleashing “your other side” though? No idea. Could mean anything. If DJI is releasing an action camera, then the rumours is that it’ll essentially be based off the internals in the DJI Osmo Pocket in a new action camera form factor shell. But, comparing to the Osmo Pocket… Could “other side” be literal? Could it mean the other side of the unit? Cameras on front and back? Is the new action camera actually a 360 camera?

It could equally not be a camera at all. Well, not directly. DJI might finally be giving us remote control submarines!

Nobody really knows what’s coming until DJI’s ready to tell people something, which they’re apparently planning to do on Wednesday, 15th of May.

I guess we’ll find out then. We’ll post updates when we know more, but if you want to get the official announcement in your inbox, you can sign up for notifications on the DJI website.

What would you want to see DJI put into an Action Camera?