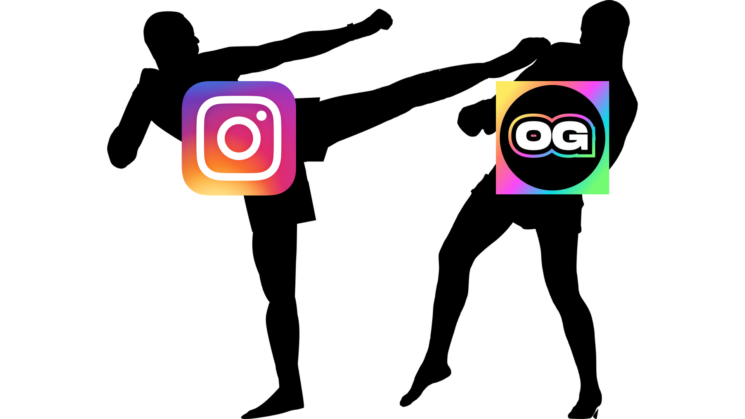 Yesterday, we wrote about OG App, an Instagram clone that doesn’t look like a commercial break in the middle of your favorite TV show. But only a day after its release, the app was kicked out of the Apple store.

Instagram’s parent company, Meta, claims that it has taken “enforcement actions” against OG App. What’s more, one of the OG App’s founders claims that the personal Instagram and Facebook profiles of his team have been permanently banned. A coincidence? I don’t think so.

In a statement, a Meta spokesperson said that OG App “violates [their] policies” and that Meta is “taking all appropriate enforcement actions.” According to Engadget, they declined to elaborate on what exactly those actions were. They also didn’t say if they’d been in contact with Apple regarding the OG App’s ban, but they pointed to a blog post about Meta’s policies on clone sites.

In the blog post, Meta describes a clone site as “a third-party site that duplicates, in whole or in part, the content of an existing site.” Since Meta doesn’t offer a public API, the OG App reportedly confirmed they reverse-engineered the Android API to build the Instagram clone. Therefore, the OG App founders did break Instagram’s policy, probably also the law (although the latter is just my guess).

However, Meta doesn’t seem to be that innocent either. Speaking with Engadget, Hardik Patil, one of the app’s founders, said he hadn’t received direct communication from Meta. However, the Instagram and Facebook profiles of the OG App’s team suddenly ended up being permanently banned. “Meta is intent on taking extraordinary measures to suppress and censor us simply because we did right by their users,” the founders write in a tweet. “The only way they would’ve been able to do this is if Meta searched up every team member on LinkedIn or Google, found our full name, and manually banned us since we never linked our Facebook accounts to OG (most of us haven’t even opened Facebook for months).”

Meta has banned the personal Facebook (not linked to OG) and Instagram (linked to OG) accounts for everyone on our team, permanently.

Meta is intent on taking extraordinary measures to suppress and censor us simply because we did right by their users. pic.twitter.com/JOzJ81p81k

Patil concluded that “users deserve the right to control what they consume” and added that “OG will continue to defend and fight for that right.”

Photopea is a free Photoshop clone that works in web browser

Contest: Use our free resources to Create a killer photo and win $250 To spend in our store

« Sony officially announces the new FX30 APS-C cinema camera – basically an FX3 with a Super35 sensor
Nikon is trying to invalidate RED’s raw video patent, arguing it shouldn’t have been granted in the first place »