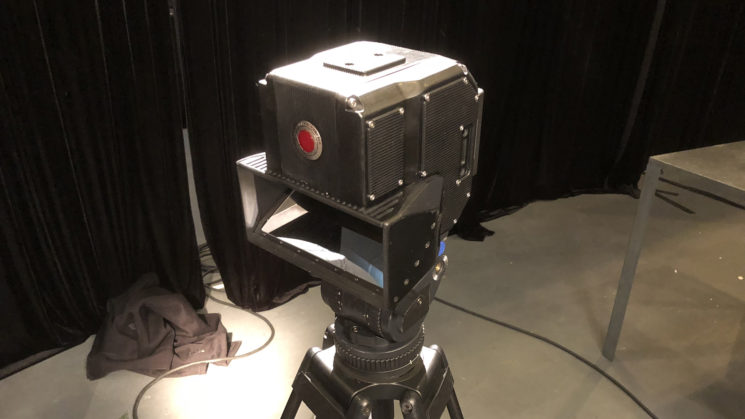 The release of RED’s new Hydrogen One holographic smartphone is drawing ever closer. We’ve known about its modular connectivity through the pogo pins on the back, but very little has been said about what they’re for. It’s been suggested that we’d perhaps see battery packs or small camera modules to use “real” lenses and that it may offer communication with RED’s range of cameras.

Well, the first of those cameras has been announced. RED has teamed up with a 3D VR camera company, Lucid on an 8K prosumer 3D camera. A camera not only shoots holographic content that can be viewed on the Hydrogen One but a camera which also uses the Hydrogen One as its “viewfinder” while shooting.

About the new camera, RED says in a press release…

The new camera is the first dual camera to give users full 8K video and picture capabilities converting to 4V in real-time while allowing them to shoot like professionals with dynamically adjustable lens distances for the best 3D focus and zoom. By attaching the soon-to-be-released modular holographic phone–RED Hydrogen One–to the camera, users will be able to view 3D/4V content in post and live as if it were the viewfinder.

The new camera will contain RED’s hardware, camera designs, and have a similar aesthetic to RED’s other cameras. Lucid will contribute their real-time 3D fusion technology which stitches the images together making files compatible with the Hydrogen One phone. The fact that it’s all done in realtime means that the Hydrogen One can be used to “view the content immediately in 3D/4V without headsets”, says Lucid CEO, Han Jin.

There’s no word on price or a release date yet for the camera, although it will be avilable through RED directly. It’s unlikely the camera will appear on the market before the phone does, but we don’t know how soon after the phone’s release the camera will come.

As to the cost… Well, the aluminium version of the Hydrogen One is $1,195 with the Titanium at $1,595. And given the cost of RED’s other cameras, this won’t be inexpensive. They say it’s a “Prosumer” device, but I’d expect an above-prosumer price tag.

I always wondered why this hadn’t become a thing much sooner. Not the whole 3D/4V/hologram thing. But phones as interfaces for cameras. Sure, you’ve got the DxO One, and a couple of 360 cameras, but beyond that, there’s very little physical phone/camera integration out there. And phones have much larger displays than the LCDs built into DSLR and mirrorless cameras.

Phone UI integration did seem to be a thing for a while, with companies like Alesis making a field recorder which used the iPhone as its user interface (I actually still own one). And I half-expected Sekonic to release something with similar functionality before they announced the L478 light meter.

Of course, the iPhone has several different form factors now, and there are a million different shapes and sizes of Android device out there. So it would be difficult to create something now that would cover a wide range of devices.

But, if, like RED, you make both the phone and the device it plugs into, you can guarantee compatibility.