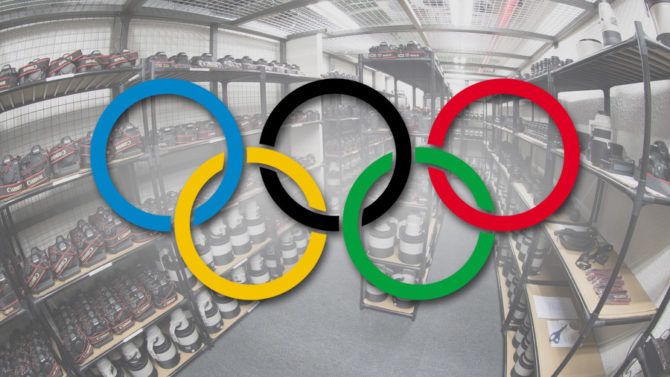 This is my fifth Olympic Games and I am always visiting the Canon Professional Services area to borrow equipment from them. And for all of those previous Olympics, they have always been very guarded about letting anyone, outside of Canon employees, go behind the scenes to see what they have in their inventory. And trust me, I have asked in the past.

Well, this year I was allowed into the back room to see the arsenal  of cameras and lenses, and it was incredible! I have a warning for all the photographers out there. The photos in this blog are going to make you salivate! 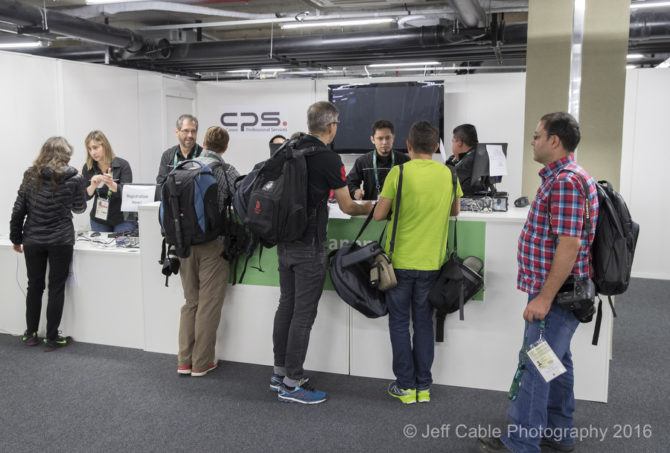 This is what all the press see from the outside. They can have their badged scanned and borrow just about any lens or camera that Canon makes. 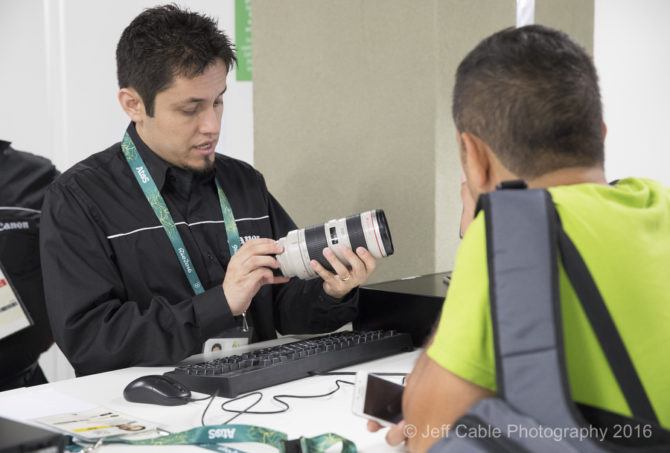 They also perform repairs on the equipment as well. But this front registration is all that most people see…until now! 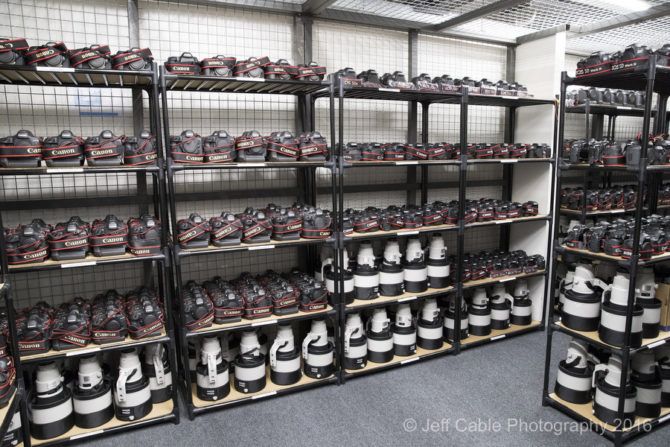 I was taken through a gated entryway, turned the corner and then stepped into the back storage room and was blown away. There was an amazing amount of equipment here! The first thing I saw were racks and racks of Canon 1D X Mark II cameras. I must have looked like a kid in a candy store. 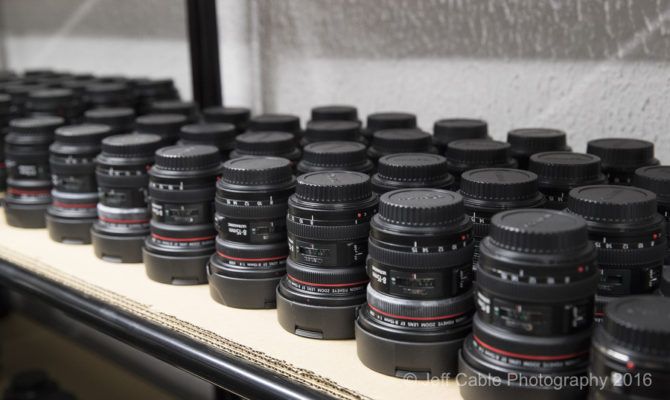 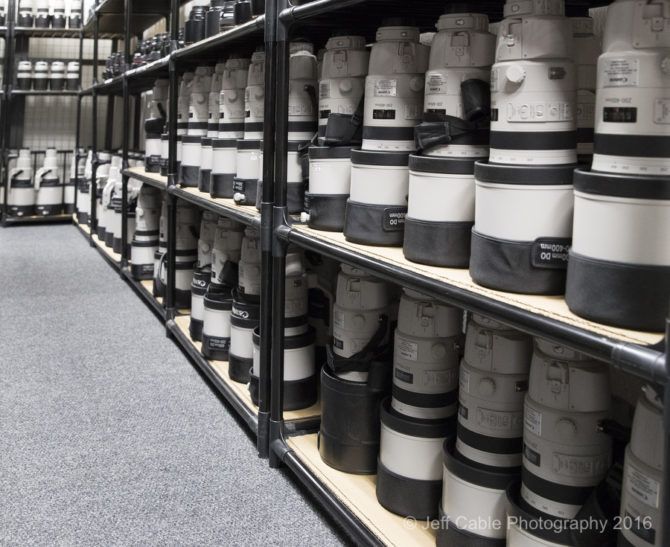 Or maybe you would be interested in a couple of longer lenses? 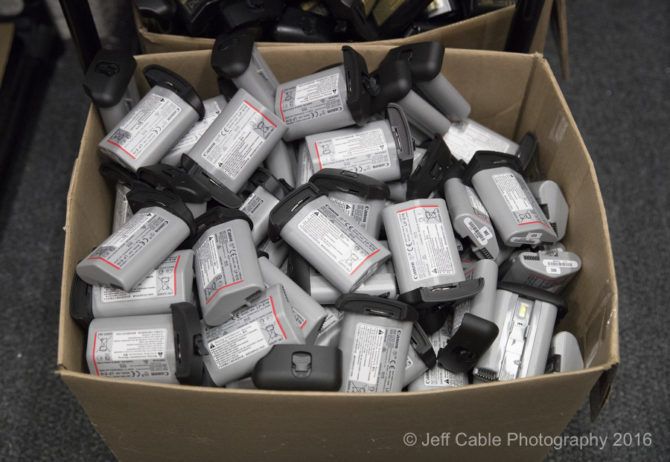 I was even enamored with the box of batteries. I know, I know, this makes me a total camera geek. But this is good stuff. Trust me! 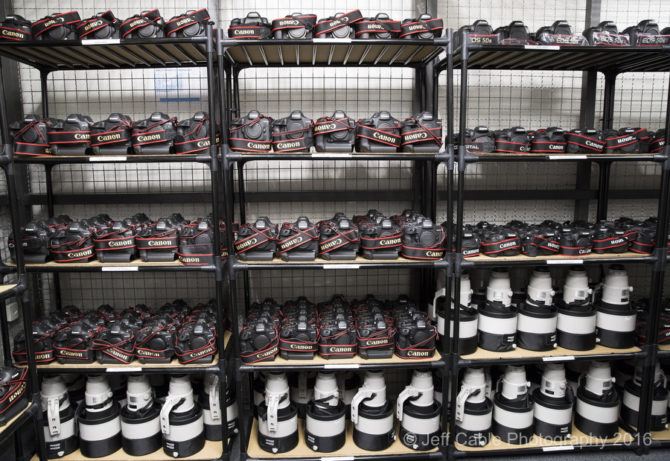 I can not even imagine what this would all be worth. 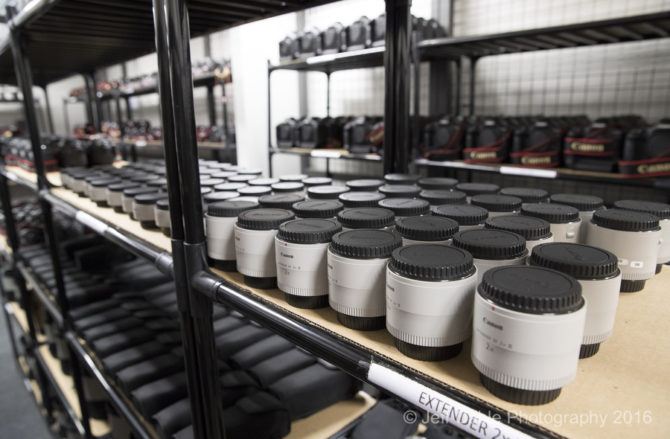 They have everything in this room, including tele converters, flashes, straps, chargers. You name it. 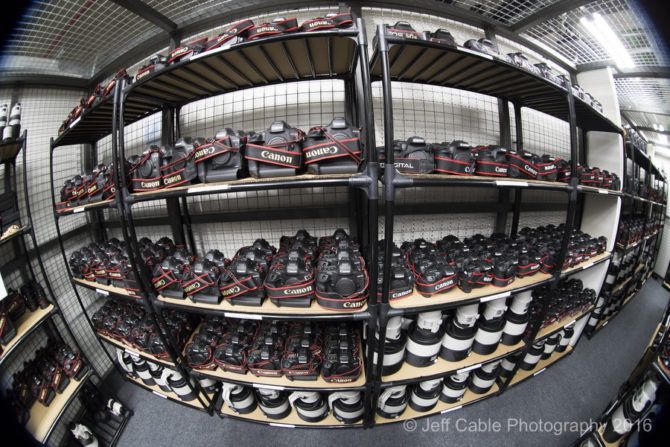 And since I was in a room full of lenses, I decided to grab the Canon 8-15mm lens to get some shots. I have to say, it was fun being there and having all the lens choices at my disposal. That does not happen very often. 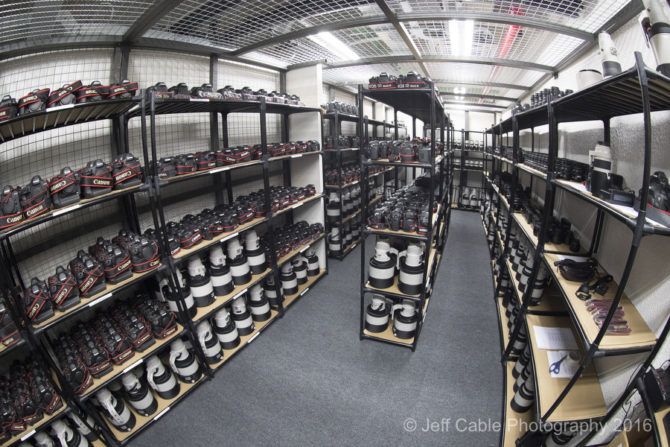 Here is a fish eye shot of the room. 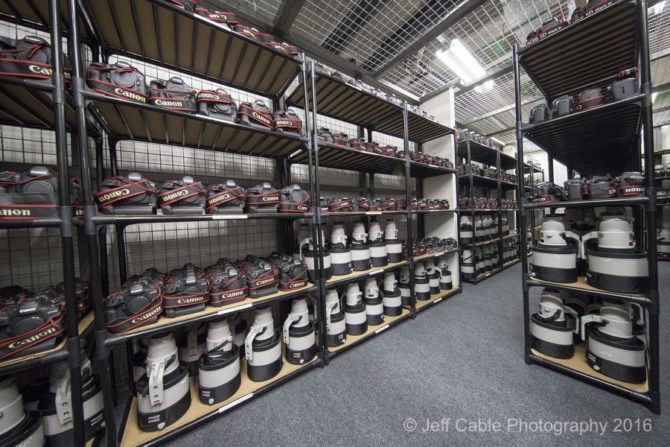 And then I grabbed the new super wide Canon 11-24mm lens which has almost no distortion, and took some more photos. 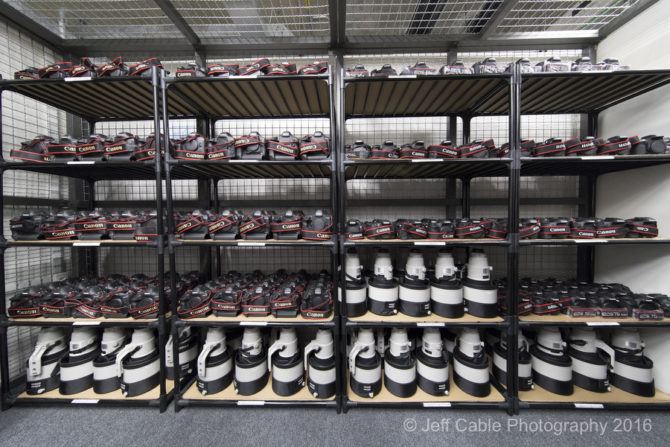 Look at this photo to see an example of how straight the Canon 11-24mm lens is. For some of the other photos in this blog, I had to do perspective correction in Photoshop, but not with this baby! 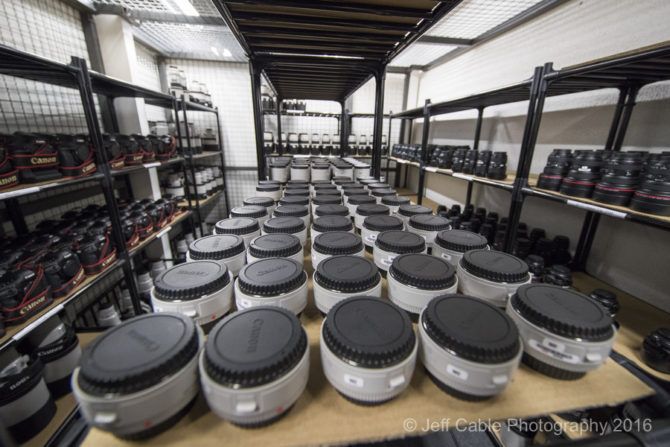 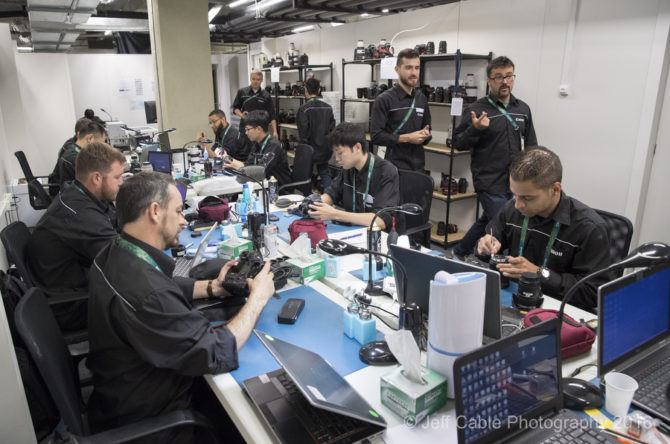 I was also allowed to see the repair operations in action. Canon has a staff of more than 70 people at the Olympics. Heck, that is more representation than many countries have here. 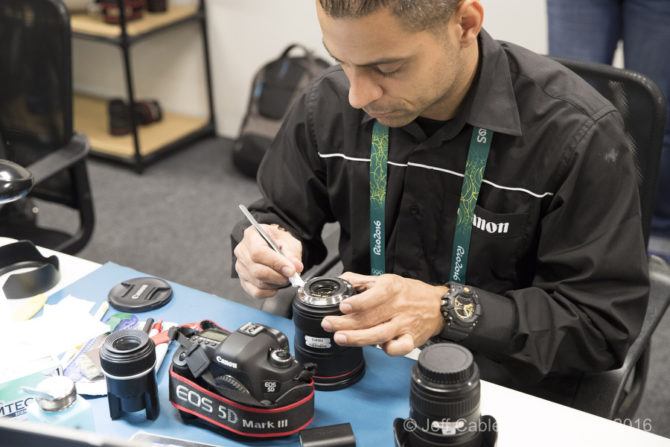 Here is a shot of one of the Canon technicians working his magic.

I was also taken into a really long narrow room where they perform the lens calibration. They have a rolling cart on a long track, where they mount the camera and lens, with which they can perform precise lens calibrations on any focal length lens. I was not allowed to take photos in this sensitive area, but trust me, it was really cool. 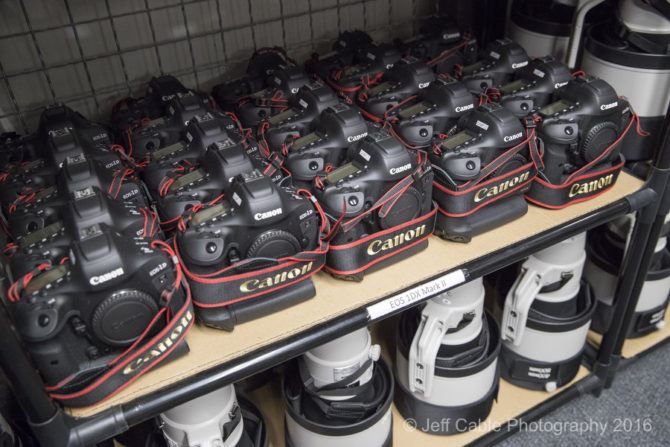 After viewing the service area, I took one more visit back into the storage room to get some tight shots. 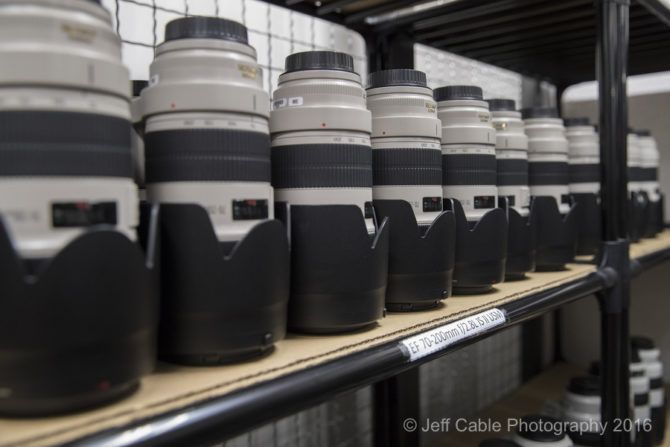 And at this point, you may be wondering what I walked out of their with. Today I borrowed two of the Canon 1D X Mark II cameras, some extra batteries, and the awesome Canon 200-400mm lens.

I hope that you enjoyed this exclusive look at Canon

Jeff is a world renowned, five time Olympic photographer having covered Beijing, Vancouver, London, Sochi and now Rio. He is one of the most sought after presenters and educators in the photography space. You can find out more about Jeff on his website, follow his adventues on his blog, or reach out to him through Facebook. This article was also published here, and shared with permission.

Battle of the $2,499 Canons: Canon 5D Mark 4 vs. Canon R6
« On Being a Female Street Photographer
2 quick ways to add contrast without touching the contrast slider »