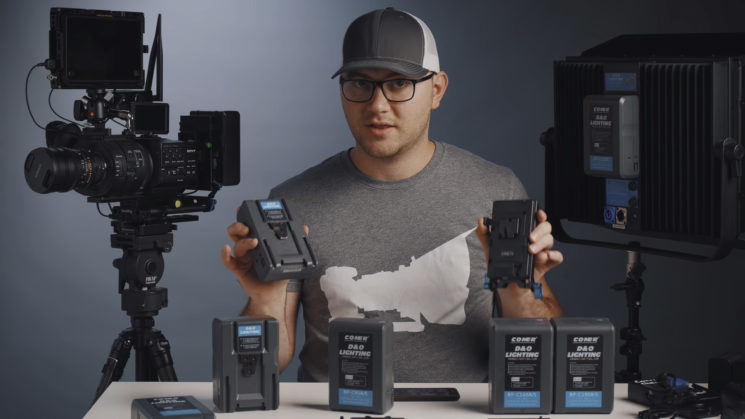 At one point, V-Mount batteries weren’t very common outside of high-end production. These days, though, they’re starting to become much more prolific as the devices that utilise them are becoming more affordable. But V-Mount batteries can be pretty expensive, which puts a lot of newcomers off even considering them. But should you?

In this video, Caleb Pike goes over just about everything there is to know about V-Mount batteries. He talks about the devices he uses them with, the various adapters available, powering multiple devices from a single battery, and even touches on battery capacity limits for flights.

While many might just think a battery is a battery, so what’s the big deal? it’s obviously not true if it takes Caleb 11 minutes to go through it all. As he explains, V-Mount batteries have been an industry standard for years. And with good reason. They’re extremely reliable and versatile. It’s those qualities that makes them so popular.

Yes, they’re expensive, but over the long term, they can work out to be much more cost effective than other battery sources. And, as demonstrated in the video, other batteries, such as Sony’s NP-F style batteries can actually be converted into V-Mount batteries with adapter plates, in case you already have loads of NP-F, but have devices which utilise V-Mount.

Caleb uses D & O Lighting’s Comer V-Mount batteries, but these aren’t the only brand out there. There are a lot of other brands with different capacities, features and prices. Like the Core SWX we recently gave away for IBC, which contain an LCD to show you exactly how much charge is left. Then there are “travel sized” V-Mount batteries, like these from Hawk Woods.

Whatever you want to power on location, if you’ve been considering V-Mount, hopefully, this should help to answer some of your questions.

Ultimately, whether they’re worth the cost will depend entirely on your own needs. But they’re definitely worth at least considering.

Everything you ever needed to know about shooting and editing timelapse

« What is colour science? Why does it matter? And what makes Canon special?
Jack White of “The White Stripes” opens film lab in Nashville »