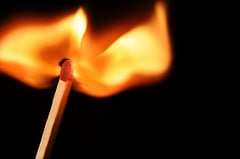 It might be just me, but I love fire. I did a little survey and 5 out of 5 photogs I checked with are little pyros too. Maybe it is part of the requirements of the trade. And maybe we’re all still small kids who get a buzz from a little fire.

This is why I decided to create a small startup guide for shooting matches – feel free to add/comment and improve. The more ideas we throw into this, the better this guide will be. 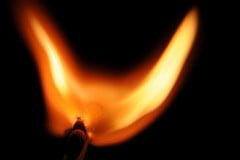 For this project I got lots of matches. I figure that in the course of taking the shots, I must have killed over 300 matches. Each box holds about 50, I ran through about 6 boxes. At any rate they are sooooo cheap, so just get a ton.

The other stuff you’ll need is: clothes peg, a light stand, a tripod and a fire extinguisher. (Hopefully the last one is a loaner, you can return unused). 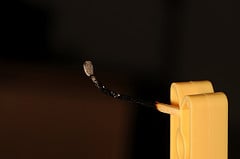 Using a rubber band or some wire attach the cloth peg to the light stand. You will later use the peg to hold the matches, so it is very comfy to have it on a light stand, you can easily adjust height and placement. Admit it, it cannot be any simpler.

Once you place your camera, use the light stand amazing ability to move to put the match right where you want to.

3. The Need For Speed – Forget About RAW

You’ll need to use burst mode for this, to maximize the frames per seconds, you really want to use Jpeg. RAW takes some processing time and limits your FPS. (On my Nikon D300 – I got about 2.5 FPS with RAW and a machine gun rate with Jpeg.

My first thought was to use a macro lens. Then I thought, Fir, very close to the lens….. No thanks. I used the excellent Nikon 24-70, knowing I’ll have to crop. So yes, I prefer cropping over closeness – at least when shooting fire. As Robert Capa almost once said “If your burning matches pictures are not good enough, you are not close cropping enough“. 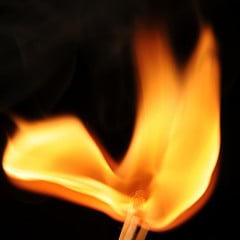 Set your camera to take Jpegs, and set it to continuous shooting – the faster, the better.

Now fire in general and a heart of a match in particular are very bright, so set your camera accordingly: ISO 200, shutter speed 1/500 and aperture f/8-f/9.To save to focusing time, focus on the match and set your camera to manual focus.

Remember, you’re shooting jpegs, so make sure you have your white balance set properly.

Now place a perfectly healthy match in the peg. Focus your camera and start another match.

As with the burning light bulb, the secret is to take timely sequences. Start the sequence before lighting the “real” match, and then light the real match while taking more and more photographs.

Release the shutter release button, and blow the match.  A cycle is completed. Chances are you have one or two good shots now.

Repeat until no more matches are left.

6. Variations On a Theme

Playing around with the basic setup, you may see some things that bother you: 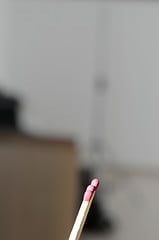 Firstly, that the match is almost burned up by the time you have the shot. The trick to overcome this is simple – stick two matches in the peg and light the one standing away from the camera first.

Secondly, you may not be happy with the fact that the wooden part of the match is dark.

This can be fixed by using an on-camera strobe (I used the Nikon SB800). Since you are shooting warm fire and want to make the match look good, cover the flash with a CTO gel. You are very close to the match so flash can be set to manual on a fairly low setting like 1/32. 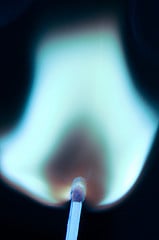 You’ll have to crop, remember? We decided on that in the early phases.

Another trick is to drag the white balance to the far edge – you’ll get a cool blue fire.

Of course, if you’re half as pyro as I am you’ll start stacking more and more matches, just to see what happens. Remember that extinguisher – this is the time to keep it close by.