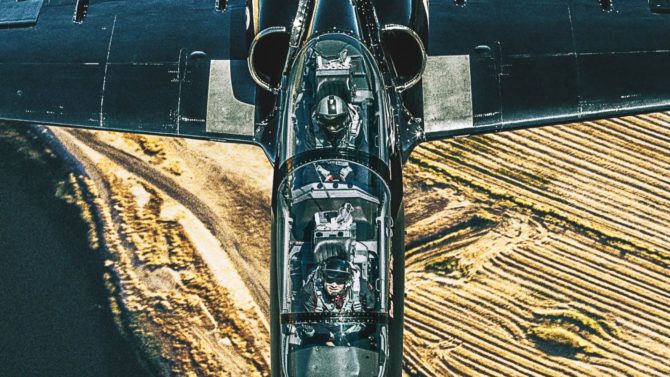 For anybody who’s seen the legendary movie Top Gun, there’s one scene often sticks out in the mind. In it, a fictional MiG-28 is cruising through the air. Maverick (Tom Cruise) and Goose (Anthony Edwards) fly above it, inverted, in an F-14 Tomcat. Goose then proceeds to photograph the pilot of the MiG with a polaroid camera.

Advertising photographer Blair Bunting wanted to try to recreate this. Firstly, to see if it was even possible, and also to see what the shot might have looked like. So, he teamed up with the Patriots Jet Team, as well as fellow photographer filmmakers Jaron Schneider and Toby Harriman of Planet Unicorn Productions. Then, they set to work.

First, though, let’s remind ourselves of what the original scene looked like (skip to 1:30 if you don’t want to see the whole thing). And, just for a giggle, Maverik’s account of the event in a later scene.

It’s certainly an interesting challenge to take on, and we’ve seen shots of planes inverted above other planes before. Not jets, though. The speed and forces of doing this with jets takes this to a whole new level.

Immediately they knew there would be issues shooting this with a Polaroid camera. So, Blair chose to use a Hasselblad H6D with 35-90mm lens. A distinctly more expensive, and heavy, rig than that used by Goose.

For me, I think the most amazing thing about this is the skill of the pilots and seeing it at happen from such a close view. It’s a lot cooler without all the Hollywood effects and bad green screen work. They didn’t get quite as close to each other as purported in Top Gun, but they still got impressively close to try and get the shot.

One thing Blair hadn’t accounted for, which his body went on to regret was the weight of the Hasselblad. Pulling 4G. The H6D and 35-90mm lens weigh 3.54kg on the ground. That’s a little under 8lbs. Pulling 4G makes the camera feel as though it weighs more like 14.2kg, or 32lbs. Blair actually suffered some pretty severe bruising on his shoulder and collarbone as a result.

He proved that what was shown in the movie was definitely doable. Sort of. Yes, you can get a shot. It probably won’t be very good, but you’ll get one. As for Goose’s Polaroid, Blair posits that he almost certainly wouldn’t have gotten anything worth showing anybody. It probably wouldn’t have even prove what happened, seeing only the reflection of its own flash in the cockpit window.

You can read more about Blair’s adventure on his blog, and there’s a behind the scenes write up with a lot of extra clips and details over at Planet Unicorn.

How do you think they did? Was the result worth the effort? Does it even matter? It sure looked like fun whether they got the shot or not. Let us know your thoughts in the comments.

« Shutterstock works its way into Photoshop with new plugin
The Image Manipulation Store is closing. 35% off on everything for 48 hours »