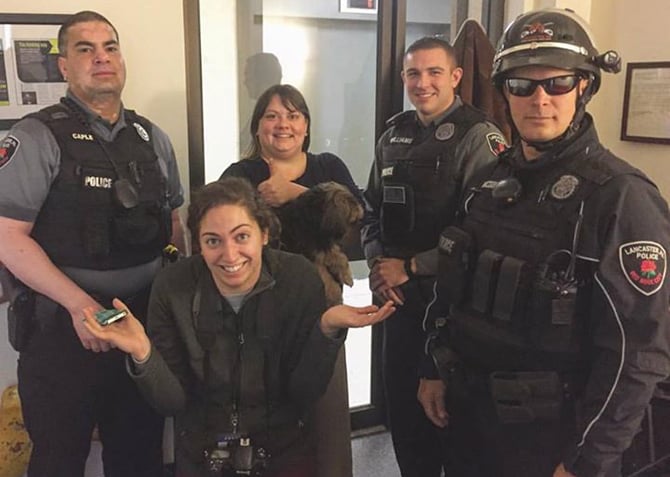 Every once in a while someone talks about the violence in the realm of photography. We talk about the images used to ‘shoot’ photos, or ‘take’ photos, and if we’re lucky our gear can ‘fire’ 14 fps.

This incident, though, takes it to a whole new level and while many photographers carry a Canon around with them, one photographer in Pennsylvania was suspected of carrying an actual machine gun.

Turns out someone noticed a person walk into an office building with what looked like a machine gun and called 911.

According to Lancaster Online, police showed up at a central Pennsylvania office building yesterday at about 11 a.m. following the 911 call and began a floor-by-floor search of the building.

The ‘machine gun’ was finally found on the 10th floor when police in body armor spotted the photographer with her tripod.

Other than an awesome story, the unnamed photographer also got a photo with the police officers who responded to the potential threat. The photo was shared on Facebook by Industrial Resolution, the company the photographer was there to document.

Sometimes, when a charming photographer from the Reading Eagle comes to take your photo for an upcoming story, and…

Despite the fact that a real machine gun costs a LOT more than a tripod and couldn’t be carried around so easily, this is one of those ‘better safe than sorry’ cases’.

“The citizen who reported this was doing what every citizen should do ALL the time — be vigilant and report suspicious activity,” said Lt. Todd Umstead of the Lancaster police department.

He added that police would “much rather respond to a call like this and determine it to be unfounded, than not get a call for something that ends up being the real thing”.

P.S. this is not a good week for the police, earlier this week, they have mistaken a Gimbal for a Drone.

« TriggerTrap’s LapseWorld Shows off 5 Major Cities Through the Eyes of Crowdsourced Time-Lapse Photographers
Rant: Dear Adobe, Your Mobile Apps are a Mess »