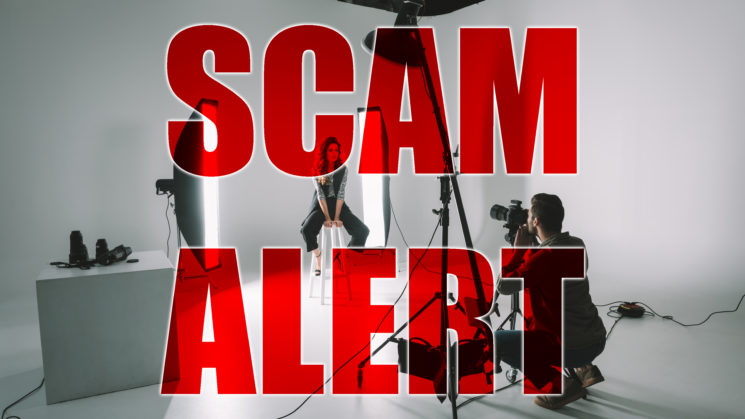 If only people were creative in creating art as they are in coming up with scams. Photographer Jay P Morgan recently became a target of a scam that could make less experienced among you believe it was legit. But to stop you from being taken by it, Jay P shares his story and his recent experience. He’ll give you some tips and tell you some of the red flags to look for if you happen to get a similar offer.

It all started with an email inviting Jay P to do a fashion shoot for Esquire magazine. He doesn’t normally shoot fashion, but he got interested and started exchanging emails with the person who contacted him.

“It’s amazing how elaborate this was,” Jay P writes in a blog post. “I got a complete breakdown on the shoot, there will be one outfit per model, five images of the models together, outfits and wardrobe will be supplied by us, they sent a complete breakdown of the kind of images that they wanted.” The alleged compensation for the photographer was $4,000, as well as talent fees. They even sent a contract, a pretty typical one. “Someone’s pulled this somewhere from the internet,” Jay P says. The contrast also read that the photographer needs to pay the modeling agency the $4,000, with a place to sign on the bottom. “I was dumb enough to sign it and send it back,” Jay P admits. !I’m trying to get this stuff done and it out of here. And I picked a date for the shoot, I signed it and sent it back.”

But Jay P noticed something was fishy when he tried to make them talk to him over the phone. The scammer kept emailing him, saying that he had to speak with someone else. They insisted that they’d send him a check, but Jay P hadn’t given them his address. After a while, they did send a $6000 check, telling Jay P that he had to send $4,000 to the modeling agency. There was no invoice, and even when they sent one, “the agency” was not in Los Angeles, and it was none of the agencies Jay P had heard of before.

The red flags and how to avoid them

They won’t get you on a call – if they insist you only communicate via email, chat, or other forms of written communication, you have reasons to be suspicious. Whenever you do a shoot, it should be easy to get on the phone with the creative director and talk about the vision and expectations.

However, if they do get you on a call, it’s more difficult to figure out that something is fishy. In this case, you’ll need to do some research:

“If the person gives you a number, get out of their loop. They want to keep you in a loop, a closed loop with their email and their phone number. They want you to be all in that loop. If you step out of their loop, you look up the person’s name at whatever agency. Say they’re at Esquire, you find the person’s name at Esquire, and you find their contact information at Esquire. And then you try to call them, you’ve now stepped out of their loop. And you’re going to come in a backdoor to see if they’re real. And if you can’t find the art directors name at Esquire, and you can’t find contact information for that art director at Esquire, then you’re probably getting defrauded, even if they’re getting you on the phone.”

Short time frames – if the job has a short time frame and puts a lot of pressure on you that you need to finish it soon, that’s another sign of a scam. After all, no serious company will notify you of a big shoot on short notice.

Unfortunately, there are all sorts of scams out there, and they’re often targeted at photographers and other creatives. So if you get an offer that’s hard to refuse, make sure to look for any potential red flags. Don’t be lazy and don’t be gullible: do your homework and do a thorough background check on the agency and the person who contacted you.

have you ever got an email like this? How did you react?