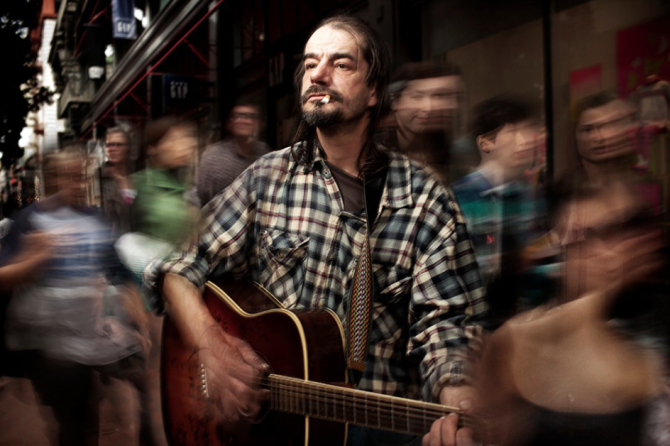 Photographer Aaron Draper describes his Underexposed project as a means by which to “enable people to gain a more humane view of the homeless.”  However, some others have described it as predatory and exploitative, sharply criticizing Draper for choosing to focus his camera on less fortunate members of society.

In a written response to the critics, Aaron challenges their assertions and shares what his vision is for the future of the project.

I never expected the exposure that the project has received. I’ve been doing this project for more than 5 years and there’s never been any kind of recognition – not that I expected any. The people that appreciated my project were the homeless individuals I encountered, the agencies that serve them and me. Because we had to choose something that we were passionate about for a thesis project, I chose to continue working on this project, which I had originally titled, Forgotten Faces. Because I was a commercial photographer, I was asked at the time of my thesis preparation, why I was exploring a topic that was more suited to a documentary style of photography. This question was important because it challenged me to think about why I preferred to light my subjects and ask their permission, as opposed to photograph them with a long lens from across the street.

It’s been about a week since the project went viral, appearing on more than 100 sites and I’ve had very little time to read the comment threads from the various sites. I have noticed that there are some negative comments about my project and how I approached it. I had anticipated some of these reactions because when I presented my thesis, the board vigorously challenged my motivation and motives for pursuing this project. I have never been paid for these portraits of the homeless nor have I ever sought any compensation. I’ve spent hundreds of hours and thousands of dollars of my own money to photograph the homeless. When I find a subject that I think will be receptive, I talk to them and listen to their story. I then offer to pay them a dollar a minute to photograph them (often this results in me paying them more than that rate, ranging from $20-$100). I then get a signed model release from the subjects. They have told me that this was one thing that they really appreciate about my approach – the fact that I ask permission to photograph them. After I get their signed release I get their photo printed and try and return within the week to find them and present them their portrait. This is one of my favorite parts of the project because my subjects often become emotional once seeing how beautiful they look. I’m not always successful with this and still have many portraits of my subjects that I haven’t found because they’ve moved, been put in jail or died. The final component to my approach to my project is I began to get local homeless agencies involved. Knowing that these agencies don’t have the funds to hire commercial photographers to work on their campaigns, I donate images of the homeless in their areas to these agencies. That way the homeless subjects are being paid for their time, they are also getting a portrait that they never could have afforded and the agencies that serve them are being helped as well. It’s a win win win all the way around.

Some people in online forums say I’m exploiting the homeless for my own purposes or trying to whitewash their problems by using a commercial style. Once they hear more about the scope of my project they’ll see that this is entirely untrue. But I do enjoy controversy. I enjoy it because it keeps people talking about an issue that is close to my heart. Apathy is an artist’s worst nightmare. And in an age when artists must compete with the vast amounts of content uploaded every minute, it’s difficult to bring attention to some of the problems in society that aren’t so pretty. If you’re wanting to get people to notice social issues, they must be as visually compelling as the advertising. That’s why I think my project is actually getting the exposure it is – I approached homelessness in a way that would grab people’s attention and keep them looking. I don’t expect my ideas to change the state of homelessness in the United States – that’s not my goal. My goal was to initiate the public discourse and from there we could get the smart people talking. Artists are often just the kindling that ignites the flames of change. I think I’ve achieved my goal.

The project is far from complete. My initial goal was to represent the culture of homelessness and focus on the methods they’ve learned for survival on the streets. In each of the images I wanted a small clue that represented that part of homeless life. This isn’t a problem that is going to go away soon, although homelessness has decreased here in the United States the last couple of years. As long as there are homeless subjects to photograph, I’ll be working on my project. I recently received a request from two PhD students working with the Romanian homeless population in London. They’ve invited me to collaborate with them on their project and provide some visuals to go along with their research. I see collaborations like these as the future of the Underexposed project.

For more information about the project, check out our interview with Aaron.  To see more of Aaron’s work, you can visit his website.

Sony responds to “too small” E mount claims. Says they can produce f/1.0 lenses, but won’t