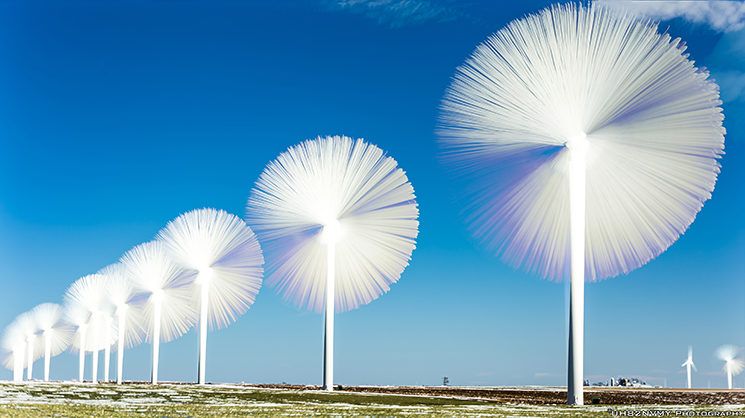 It’s the first day of spring, so flowers and photos of them are all around. But are you up for some different flowers? How about dandelions made of windmills? Photographer Jamie Seidel took and edited a fantastic photo where he made windmills look like white dandelions. It took 700 photos, so he also created a timelapse video. He has shared the details of this shot with us, and if you’re willing to try, here’s how to do it.

Jamie does photography as a hobby, but he says it’s turning into quite a passion. In the past 4 years, he’s been taking pictures more seriously and he has excelled much quicker than he could have imagined.  He loves the solitude and quietness of the night, so he often does astrophotography.

He recently bought a slider for timelapsing of astrophotography, which is part of how he come up with this windmill picture.  For star trails, you take many images and stack them in Photoshop. He says he’s driven past these windmills for years, and now finally decided to try and apply the same technique to them. Here are the settings and the gear he used:

As you can see, the gear setup is pretty simple. A camera on a tripod and a remote control. I asked Jamie how he took the shots, and of course – how he created the final image. And here’s how the process looked like:

For this shot I setup my 6D with my 70-200mm mounted on it.  Framed it so all the windmills were in a row and started my timelapse.  I let it take just under 700 shots.  It was very, very windy so I couldn’t really run it for too long because the wind was blowing my camera around a little bit.

I find it fascinating that 700 photos were necessary to create a single shot. But, I believe taking photos was actually the easy part. As for the post-processing, it took some time and patience in Photoshop. And here’s how Jamie stacked the images and got the final result:

Stacking these was a bit tricky.  Since I couldn’t stack and align 700 images in Photoshop all at once I had to stack 100 at a time.  What I would do is open 100 images, then stack and align them.  Once they are all opened I would change the layer blending mode of all the images except the last image to “lighten” which brings out all of the brightest parts of the images.  I deleted any of the ones that were really really bad because they were just too bad to fix and I had enough images I didn’t need to worry about them. Then, I would flatten all 100 images.  Once I did that for all of the images I manually stacked and aligned them into one image.  Then flattened that one for my final image.  I actually had to start over about 4 times because PS was not playing nice with this large of an image.

I always love to see people who have fun with photos and get fantastic results like Jamie did. I really like this creative game he made from his images, and I’d like to thank him for sharing the details with us. So, if there are windmills in your area, you know what to do. Jamie showed you how, all you need to do is go out and shoot.

Jamie Seidel is from Viroqua Wisconsin but living by Madison Wisconsin now.  He works at a theater lighting company by day… but as timelapse, star trail and astrophotographer by night! And his photography hobby is turning into quite a passion. For more of his photographic work, like his Facebook page, follow him on Instagram, Flickr, 500px and Twitter. And for more of his videos, subscribe to his YouTube channel.

« 5 creative ways to use monopod and improve your videos
Nikon 600mm lens vs. shotgun: what’s better for shooting clay pigeons? »