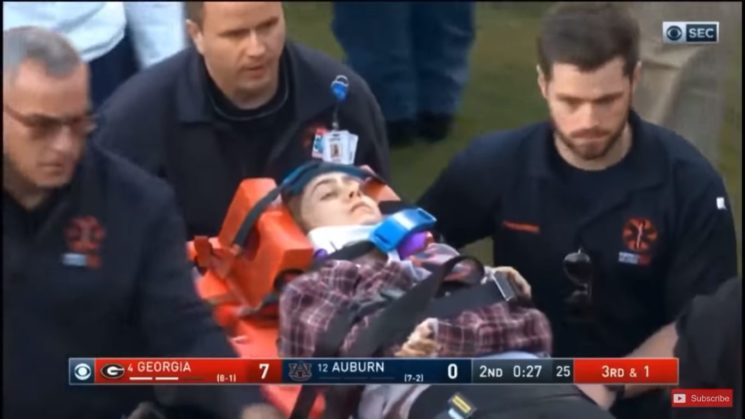 A yesterday’s college football game between the Georgia Bulldogs and Auburn Tigers proved dangerous for a photographer on the sideline. Following a short pass, a Georgia player slammed into her and immediately knocked her unconscious.

At the moment of the incident, the whole stadium went silent. The photographer was lying with her eyes closed, not moving a muscle. The paramedics arrived immediately, put her in a neck brace and on a stretcher. At one point, she opened her eyes, to everyone’s relief.

According to reports, Smith was responsive on the stretcher and able to move her extremities. She was reportedly treated at the East Alabama Medical Center and checked for an orbital fracture and concussion.

Brian Herrien, the receiver who ran into Smith, shared a tweet after the game to express his concern:

My heart goes out to her and her family I prayed for her well being as we took a knee ??❤️ https://t.co/L8Vmz3Ffse

Smith has been released from the hospital, and she shared an update on Twitter, saying that she suffered a concussion. However, she hopes to be back on the sidelines again soon.

We have already seen that sports photography, despite being exciting, can also be dangerous for both photographers and their cameras. So please, take care as much as you can and always try to be aware of what’s going on outside of what you see through the viewfinder. My heart goes to Chamberlain Smith and I wish her a speedy recovery and to get back to the sidelines soon.

« What are parfocal lenses? Are they important? And why do filmmakers want them?
Photographer accused of booking weddings and never showing up to shoot them »