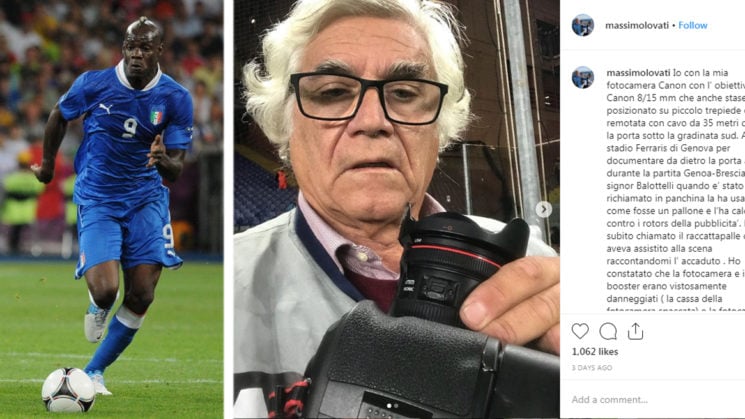 Incidents happen in sport and sometimes, sports photographers get accidentally involved in them as well. But apparently, some sports players will rage out on photographers even though they did nothing wrong. Football player Mario Balotelli recently got angry over a referee’s decision. So, he took his anger out on a nearby tripod, smashing a photographer’s camera.

Photographer Massimo Lovati turned to social media after the incident. In an Instagram post, he explained what happened during the Genova-Brescia match when his camera got destroyed.

With the help of Google Translate and my rusty Italian, I conclude that Lovati placed his Canon camera with a cable remote on a small tripod under the South stairs of the stadium. “Mr. Balottelli used it as a ball when he was recalled to the bench and kicked it against the advertising rotors,” the post reads. Lovati writes further that he immediately called the ball boy who had witnessed the incident. He explained to the photographer what had happened.

“I found that the camera and the booster were noticeably damaged (the camera case was cracked) and the camera was no longer working,” Lovati writes. After the game, he spoke with the director of Brescia, Balotelli’s football club. The photographer plans to send Brescia the bill to reimburse him for the cost of the repair or replacement of his gear. Personally, I believe that’s the right thing to do.

Lovati notes in his post that he’s furious with Balotelli’s actions and lack of respect. Honestly, it even got me angry, and it’s not even my gear! Seeing people act disrespectfully to others and to their work always makes me frustrated. But in this case, I guess this is relatable since I’m a photographer myself. I know how hard I must work to afford a new camera or a lens. And I would surely also be furious if someone kicked it like that just because they’re angry with someone else.

It shouldn’t be that hard to control your rage. Or at least, channel it somewhere else. And it’s even less hard to be nice and apologize when you do something wrong (accidentally or on purpose). But as I conclude from Instagram comments, the photographer still hasn’t heard from Balotelli nor received an apology.

« How to optimise your camera settings for street photography to get the best exposure
The DJI Mavic Mini is official – It weighs 249g, shoots 2.7K video and has 30min flight time »