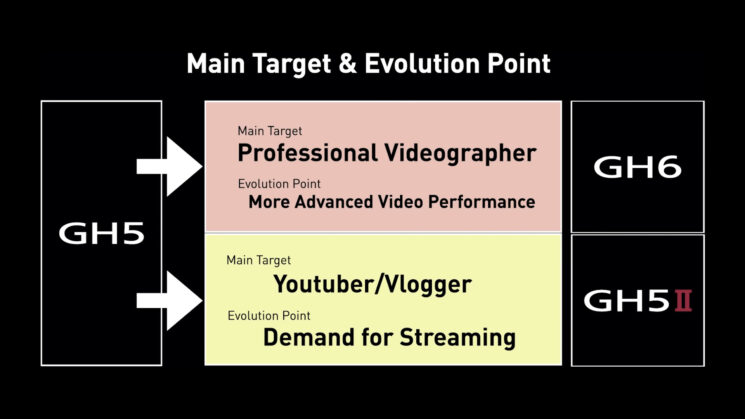 Panasonic director, Yosuke Yamane, in a video posted to the Panasonic Lumix Video YouTube channel has amongst other things, explained the differences between the goals and target market for the Panasonic GH5 Mark II and the Panasonic GH6 Micro Four Thirds mirrorless cameras.

The video was actually posted on May 26th, the day after the official launch, although it seems to have gone largely unnoticed. But it dives a little deeper into how the Panasonic GH5 as a product is diverging into what is essentially two separate product lines aimed at different types of user. Filmmakers and YouTubers.

Released in 2017, the Panasonic GH5 was pretty revolutionary, offering a feature set well beyond most other cameras available at the time – at least when it came to video. It was used in everything from high-end professional productions (once it got 10-Bit 4:2:2) to YouTubers and vloggers (thanks to the IBIS performance and flippy out LCD).

In the video, Mr Yomane says that Panasonic has been studying “evolution points” and how the two primary types of GH5 user have different needs and workflows. The new GH5 Mark II and GH6 models will cater to one or other of these types of user. So, it’s not necessarily that the GH6 will be better than the GH5 Mark II, or vice versa, but that each will be better suited to a different set of tasks and demands.

For all intents and purposes, the GH5 Mark II is an incremental evolution of the GH5, which offers essentially the same capabilities the GH5 already does, but with a lean towards YouTubers and vloggers, offering new features like live streaming built right into the camera.

The GH6 on the other hand will be targeted squarely towards the needs of professionals. Exactly what the GH6 will include or what its capabilities will be is still largely a mystery. But, its goal is to focus on higher-end video production to compete with the various full-frame options out there – including their own S series cameras.

So, both cameras are the successor to the GH5, with each targeting a different audience.

Personally, and maybe this is just me, but I’m not really seeing an attraction to the GH5 Mark II over the GH5 for YouTubers and vloggers yet. Perhaps for live streamers who don’t want to deal with capture cards or video switchers. I expect most YouTubers that are considering Micro Four Thirds would be just as satisfied with the features of the existing GH5, which will now no doubt see significantly lower prices (especially on the used market) in the coming months as the GH5 Mark II hits the streets.

I certainly wouldn’t be upset to be proven wrong, though. I think it’s great that companies are starting to take YouTube content creators seriously. And as somebody who invested in five Panasonic Micro Four Thirds bodies last year, I hope the strategy works well for them and it helps the format continue to thrive.