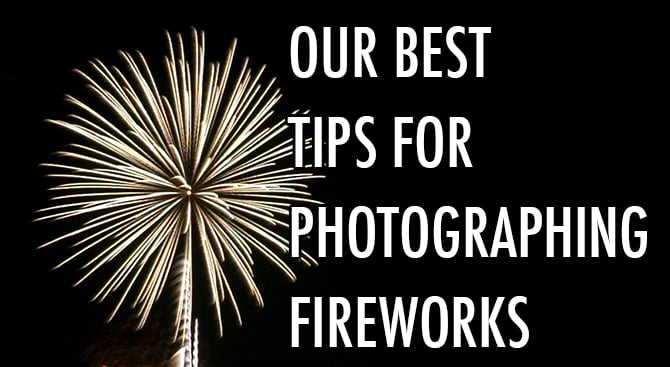 With the Fourth of July right around the corner here in the United States, along with other summer celebrations around the world, photographers everywhere will be photographing fireworks over the next couple of months. Many will try, but how many will succeed? Fireworks photos, in my experience, are usually an all-or-nothing proposition. You either get the shot or you don’t. The good news is that there are steps you can take and tips you can follow that will vastly increase your chances of success. This is not a ranking. Missing any one of these elements can mean the difference between a crisp, dramatic photo and an over/under-exposed frame of out-of-focus smoke. Instead, I chose to list our tips for photographing fireworks in the order you’ll need them.

This is, unfortunately, the biggest reason I don’t shoot fireworks as often as I’d like. In order to really succeed at this you have to get to your location hours ahead of time, stake a claim to your spot, save extra space for when the rest of your family shows up, and be prepared to defend your turf as if your life depended on it. That being said, though, there are big payoffs for those intrepid photographers willing to put in the extra time (and sweat).

CHECK THE WEATHER BEFORE YOU GO

I’m not talking about rain. That should be obvious. I’m talking about wind. It’s going to be important that you have a vantage point that is upwind from where the fireworks are being launched. Smoke gathers in the sky over the course of a fireworks display, and that can easily spoil an otherwise perfect photo. There are ways to (partially) fix it in post, but it’s a time-consuming hassle. If you are shooting from a downwind position, every frame will have smoke between you and the fireworks, rather than the other way around. The image below is a perfect example of what I’m talking about. Choosing my location based on wind direction could have resulted in a much better photo. 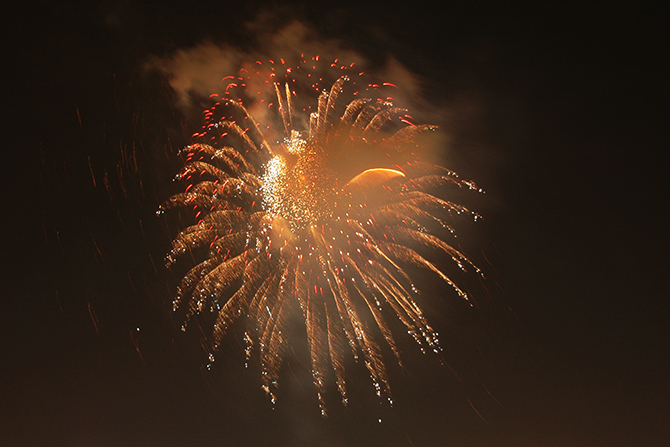 A TRIPOD AND SHUTTER RELEASE ARE VITAL

Vital. As in not optional. Without a tripod you might as well stay home and watch it on TV. As we’ll be discussing in a moment, one of the keys to successfully photographing fireworks is a long shutter speed.  Even at just a couple of seconds, this is way too slow for you to hand-hold your camera. An added level of insurance against camera shake is a remote shutter release. Wired is fine, slaved is better. Either will avoid the added vibration caused by pressing down on your camera’s shutter button. While we’re on the subject of stability, remember that it’s going to be crowded. Be sure to keep your camera safe by adding some weight to keep the tripod standing if it gets bumped– a lesson I learned after this shot. 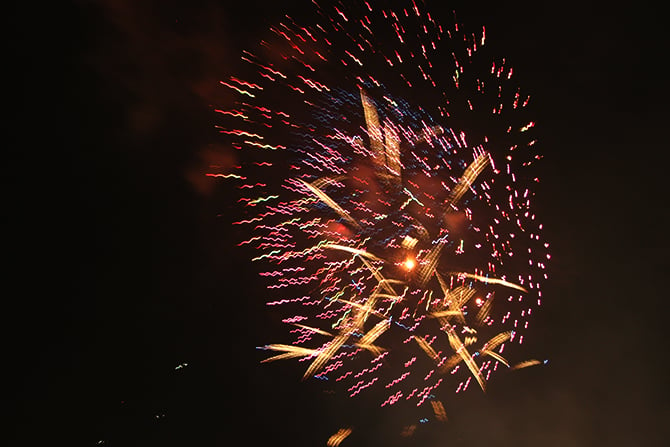 I pretty much shoot everything in Manual. That’s particularly important here, because there is going to be a certain amount of readjusting and fine-tuning the settings over the course of the fireworks show. As noted, we’re going to be using a very slow shutter speed. 2.5-4 seconds is a pretty good starting point, although I prefer something longer like 6-8 seconds or more. Remember, if the shutter speed is too fast you won’t get any of those long light trails that make fireworks photos so dramatic. If the shutter speed is too slow, you’ll have blown-out highlights right in the middle of your frame. To make sure that all this works together, make sure you’re shooting with a low ISO (100) and narrow aperture (f/11 – f/16).

In the two images below, it’s easy to see the impact of shutter speed on fireworks.  In the first, I tried a shutter speed of ten seconds.  In the second, I cut it in half to five seconds. The best choice was probably somewhere in the middle. 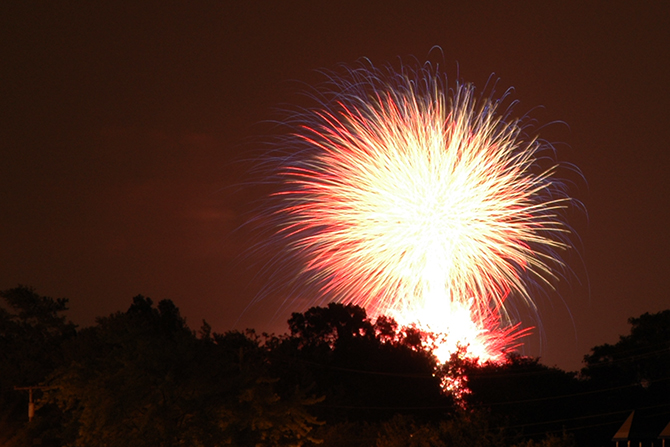 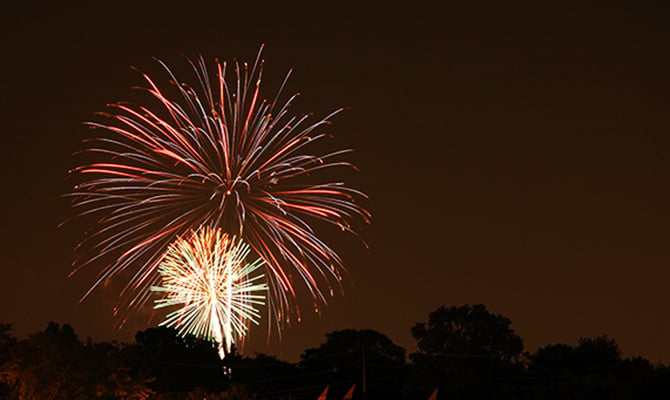 Another option when it comes to selecting a shutter speed is to switch your camera in Bulb mode. In this mode, the shutter stays open as long as you keep the shutter button pressed. This allows you to open the shutter at the beginning of the blast and close it at the end. Try this once or twice when the fireworks start to see if it works for you. If not, simply go back to setting the shutter speed on your own.

I hesitate to specify a “correct” white balance setting, because each will render the colors differently, making it a matter of personal preference. I’ve found that Daylight and Cloudy settings do a good job of staying true to the actual colors. If you are shooting in RAW, leave your WB set to Auto. You’ll be able to fine-tune it if necessary in post.

You’ll most likely find yourself adjusting settings several times along the way. That’s okay, as long as you don’t get so caught up in messing with your camera that you miss what you came for. You’ll also want to make sure you have your settings nailed down by the time the show reaches its crescendo at the end.

Once we’ve covered camera settings, the next round of questions about photographing fireworks almost always has to do with lenses and focusing. Which lens is best? Unfortunately, the best answer I can give to that question is, “It depends.” Let’s start by talking about focus for a minute. Once the show starts, you don’t want to have to keep messing with your focus. Your best bet is to establish manual focus at the beginning and then lock it down. One of the best ways to do this is to select a spot far enough back that will allow you to set your manual focus to infinity. If you can do that, you don’t have to give focus another thought. If you can’t, you might have to tweak focus a bit as the fireworks get bigger and brighter. Either way, though, you definitely want to switch out of auto focus.

Maintaining good focus is also going to be important if you are shooting with additional elements in your frame. If your images are going to include skylines, bridges, or landmarks, for example, maintaining proper focus throughout is very important. If your fireworks are perfect, but the city skyline is a blur, you’ll be forced to crop essential elements out of the photo in order to salvage it. 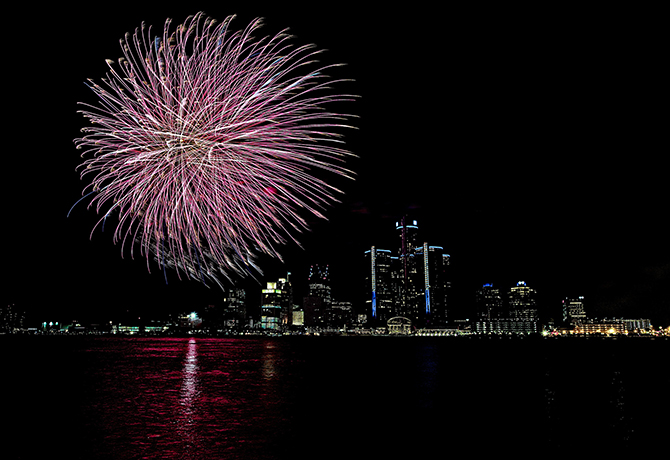 As far as the “right” lens for the job, I prefer wide angle lenses over long zooms– or any zoom for that matter. Remember that zooming in and out will require constant adjustments to focus. It’s okay if your only lens choices are zooms. Just make sure that once you’ve established your framing, keep your hands off the zoom ring. You can always crop in tight for a close-up when you are editing your photos.

This can be a little tricky at first, because you’ll have to anticipate where in the sky the fireworks will burst. Just like with focus, once you’ve established framing early on, tighten all of your tripod adjustment knobs and leave them alone. It’s going to be a much more fluid composition than you are used to, so think about giving yourself a little more room in the frame than you might for more stationary subjects. Also be sure to keep your camera straight relative to the horizon, particularly if you are including elements like the skylines, bridges, landmarks, rivers, etc., that we mentioned earlier.

What I love about the framing in this image is the inclusion of the crowd. By doing so, the photographer gave a sense of time and place– context– to the image, making it less about the fireworks themselves and more about the overall experience. 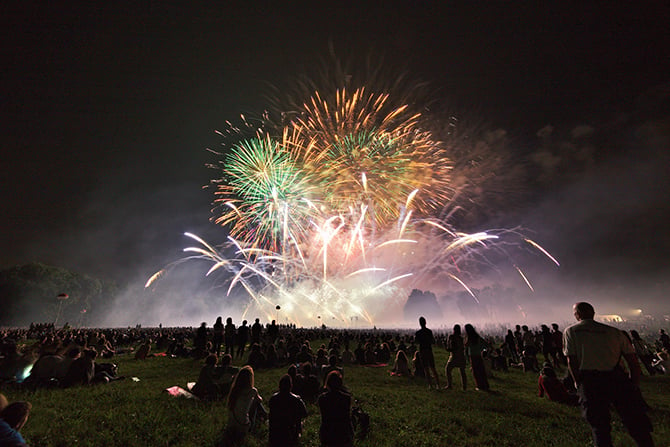 I read about this technique once and I’ve always wanted to try it. Start by switching your camera to bulb mode and removing the lens hood. Remember that bulb mode requires you to keep the shutter button pressed down. Completely covering the front of your lens with a piece of black foam core at the end of one fireworks burst and taking it away at the beginning of the next should result in a double exposure effect, creating an image with both bursts in the same frame. I won’t be able to shoot the fireworks this year, but I’m really hoping that one of you decides to try this and let us know if it works.

Low light, bright light, and movement are only three of the hurdles you need to cross in order to achieve stunning photos of fireworks. The good news is that we’re looking out for you here at DIYP. Take our tips and advice to heart and you’ll be well on your way to successfully photographing fireworks this summer.

Photo Credits: Detroit skyline, Flickr user memories_by_mike. Crowd shot, Flickr user Walter Como.  Both images used with permission through Flickr Creative Commons.  The title image and “What Not to Do” photos are all mine.

How to photograph fireworks with just your iPhone

« Introducing Photerloo – Automated Social Media Sharing and AI Keywording
Photographer recreates Back to The Future Delorean with a model car. In Camera »