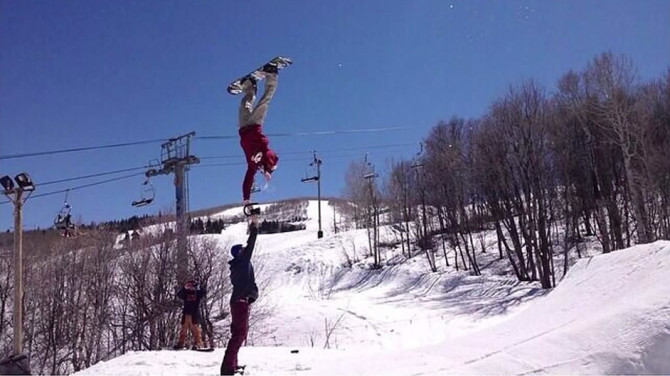 Passing off a GoPro to Sage Kotsenburg mid flip.

Professional snowboarder, Sage Kotsenburg, is well known for developing new tricks. He won an Olympic gold medal during the 2014 Sochi Olympic Games after pulling off a “1620 Japan Air Mute Grab”, a trick Kotsenburg debuted (and had actually never tried) prior to his Olympic run. For that move, he flipped through the air 4 ½ times while holding his snowboard behind his back. It was pretty wicked, enough to wow the judges and secure him the gold medal. You can check out some sweet composite images of the that entire run over on the New York Times.

Kotsenburg appeared on the Conan show last night to debut an all new trick he’s been developing: a mid-frontflip camera grab. As the name implies, the trick involves him doing a mid-frontflip while grabbing a GoPro camera out of his incredibly brave friend’s hand. Naturally, the GoPro is recording the entire thing. Check it out:

Kotsenburg is already sponsored by GoPro, but I hope his camera grab lands him an ever sweeter deal with the action camera manufacturer.

« Ever Wondered how 1,000FPS Shots Are Taken? They Use A Huge Robot
Canon and Panasonic’s Sponsorship of The Tokyo 2020 Olympics Could Cost As Much As $126 Million; Potentially Earning $10 Billion »