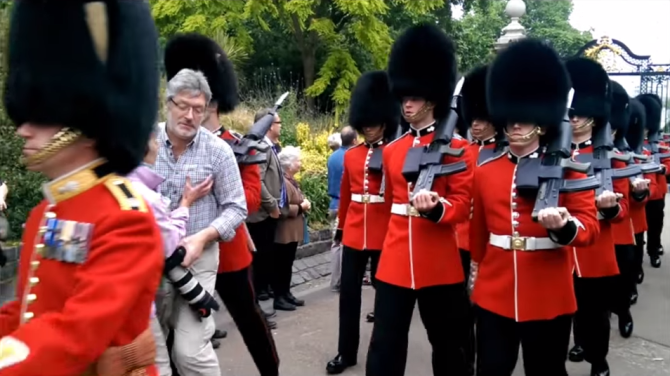 I have never had the privilege of seeing the Queen’s Guard in person, but with hats like that, one can only assume they are not very well-humored.  One poor photographer found out the hard way that nothing, or no one, will stand in the way of their duty to proudly march about.

In the video, a photographer, completely oblivious to the column of soldiers marching up behind him, is chatting with a woman, probably about the best place to find a spot o’ tea or perhaps the intricate plot details of Fifty Shades of Grey.  With no warning, the column continues to advance, nearly running the gentleman over in the process.  As they are passing, a guard is heard yelling, “Make way!”  Then again, with the lack of subtitles, he could have been saying, “Make whey,” barking orders at the commoners for a protein shake.  The queen has yet to return my call on the matter…

Doing my due diligence and researching the temperaments of Queen’s Guardsmen on YouTube, my suspicions were confirmed – these types of antisocial episodes are a common occurrence.

From the look of things, nobody was injured, and no camera equipment was damaged.  It’s just another lesson to photographers to constantly be aware of your surroundings…and to never mess with a guy who wears the skin of an animal that eats woodsmen for breakfast.