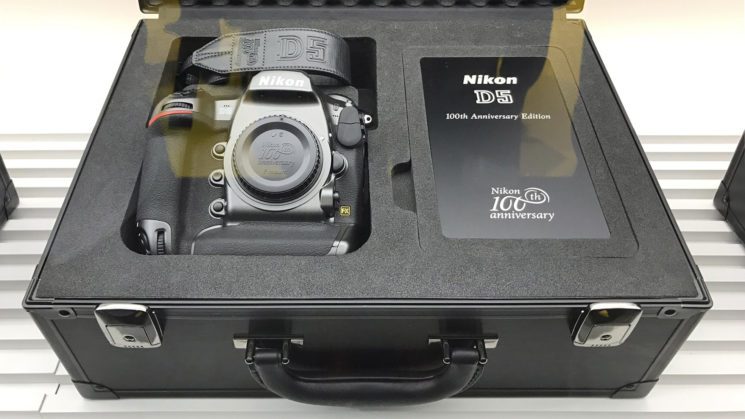 It’s not exactly a secret that Nikon is celebrating its 100th anniversary this year. But what has kept many in suspense is exactly what camera bodies they’ll use to celebrate it. After all, Nikon has a history of creating special and exclusive cameras for various events. Now it seems there are special 100th anniversary editions of both the Nikon D5 and Nikon D500 bodies.

The video and images, posted to Twitter by bal0219, are from the CP+ show currently happening in Japan.

Each camera and the set of lenses looks like it has its own hard case, with the 100th annivesary logo embossed onto the top.

They’re a far cry from the gold plated cameras of the past. But, it’s not a completely new look. Nikon gave the F5 the same gunmetal grey finish to celebrate 50 years of making cameras in 1998. While the company has been around since July 1917, they didn’t actually start making cameras until 1948 with the Nikon I.

There’s no word yet if these are simply for display, or whether these will become publicly available. Nor, indeed, has there been any mention of a price. They’re also showing off an open view of the 70-200E lens elements. Each of the cameras also has a 100th anniversary body cap and strap. Presumably the lenses will also bear a similar mark.

« This comical sketch shows the practical differences between photo and cinema lenses
The new Sigma 14mm f/1.8DG Art – Is it an astrophotographer’s dream lens? »