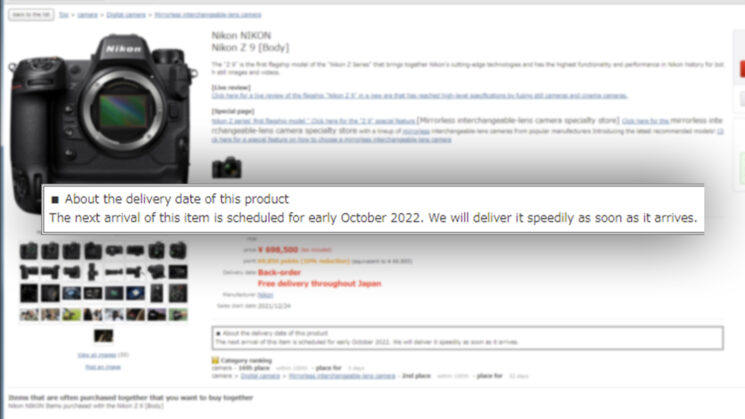 The global silicon shortage has hit all industries hard, and the camera industry is now feeling it pretty hard. New cameras and lenses have often had delays, historically, but usually not more than a couple of weeks. Then the Pocket 4K came, which had a 3-6 month waiting list for the first 18 months of its release. It was the exception, though, and not the rule. Now with the silicone shortage, it’s the other way around.

And now Japanese camera retail giant Yodobashi says that the Nikon Z9 isn’t going to start shipping out again now until October 2022. Now, we all know Nikon’s struggling generally in the camera market, but this isn’t a problem for just Nikon. Both Canon and Sony have had to massively cut down on production with newly announced items seeing delays of unknown duration.

As far as the American retailers, B&H has the Nikon Z9 available as a “New Item – Coming Soon” and you can go ahead and order one but there’s no indication as to when it might ship. With as big a retailer as Yodobashi is and especially being in Nikon’s home turf of Japan, I’m not so confident we can expect a shipment elsewhere in the world any sooner. Amazon doesn’t even list a price or give an option to buy or pre-order. They just say that they’re “temporarily out of stock” and “we’re working on it!”.

Gear announcements are going to be both exciting and disappointing this year. Exciting because we’ll likely see the same flurry of new and unusual tech that we see announced every other year, except that now it’ll potentially be a year before you actually get to play with one in your hands, which is a bit of an anti-climax. And by the time that year’s rolled around, somebody else has announced something better. What to do?

Like I said, exciting and disappointing. But also interesting. I hope the silicon markets can recover sooner rather than later – and not just for the sake of cameras – but I expect that things will get worse before they get better.