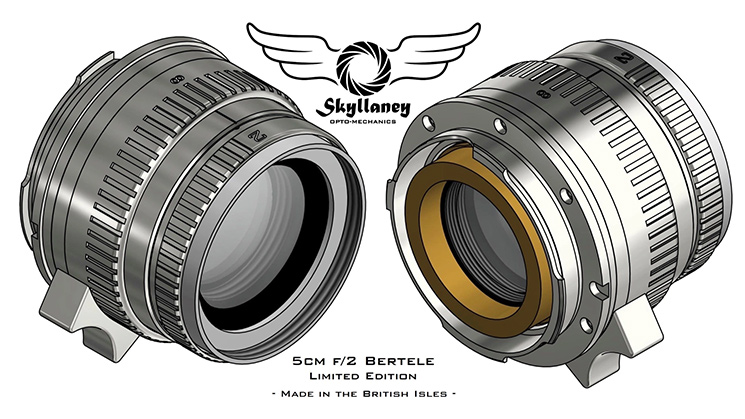 It’s not often you hear about new UK-based photographic manufacturers these days. At least, certainly not when it comes to lenses. But, it appears that’s exactly what we have, with new lens company, Skyllaney Opto-Mechanics. Their first lens will be a limited edition run of a 50mm f/2 classic Sonnar formula lens with a Leica M mount.

Based off a 1937 pre-war design by Dr Ludwig Bertele, the new Skyllaney 50mm f/2 Bertele contains the same optical formula but with modern lens coatings to increase contrast and reduce flare.  Initially, it will be offered in black anodised aluminium or chrome brass finish and a limited run of only 150 lenses with a further 100 to follow. 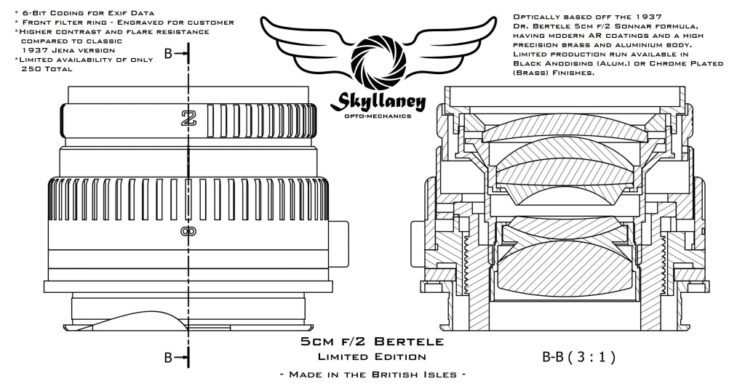 Each lens will contain a 1937 Jena-style 9 blade rounded aperture design with a maximum aperture of f/2 for “enhanced bokeh”. The focus throw is around 90-100° offering focus from around 70cm to infinity. Much of the lens assembly, engraving, testing and calibration is performed in England, with each final lens being checked by their chief engineer.

The optical blocks, lens elements with modern AR coatings, and the 9-bladed 1937 aperture design are already at our workshop, all 170 initial sets. They are currently undergoing testing, and plan to be included in our ‘Big Sonnar Review’. At the moment, they are performing very close to the 1937 Jena originals, with the added benefit of higher contrast, punchier colours and greatly increased flare resistance, due to the AR coatings.

Their goal is to have the lens released by 2021 with the plan to release a new limited-run lens each year thereafter. Top of their list at the moment after the 50mm f/2 Bertele is a compact 28mm or 85mm f/1.4 portrait lens, which would also be Leica M mount.

With an expected release date of 2021, there’s a little wait before this lens comes to fruition. And being available in only Leica M mount, it’s not going to have mass appeal. But if you’re a Leica M shooter who’s been looking for something a little different, this might be just the ticket.

There’s no word on a potential price yet, but you can find out more about the lens, Skyllaney’s history and their plans for future lenses on the Skyllaney website.