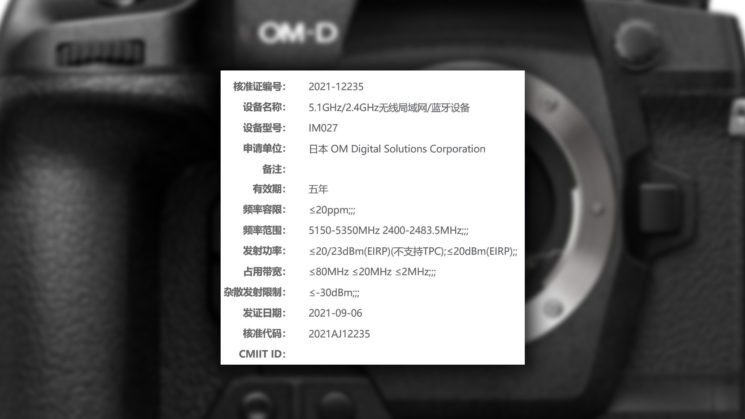 It looks like OM Digital is planning to announce a new Olympus camera at some point soon, according to a new camera registration spotted by Nokishita. The registration appears to simply be the wireless certification for a new camera, but the fact that it shows both 2.4Ghz and 5Ghz WiFi suggests that it’s likely something high end.

So far, all we’ve seen from OM Digital since taking over Olympus is the Pen E-P7 – at least as far as cameras go – and that’s not even coming to a global market. Well, that and the fact that they’re renaming everything. So, this would mark their first international release of a new camera since taking over.

“IM027” of OM Digital Solutions has been registered as an overseas certification body. Equipped with Wi-Fi (2.4GHz / 5GHz) and Bluetooth.

Typically, 5Ghz WiFi is reserved for the higher-end camera models. This is true with pretty much all camera manufacturers. So, the fact that this is certified for 5Ghz does suggest that it might be a new high-end model. Perhaps we’ll see a refresh of the Olympus OM-D E-M1X (which seems to be available with a $1,000 discount on Amazon right now) – or whatever OM Digital is choosing to call it.

Obviously, the Olympus/OM Digital camp is remaining quiet and there don’t even seem to be any rumours of what it could be, but we’ll keep you posted as we hear more.

What do you think needs a refresh in the Olympus lineup?