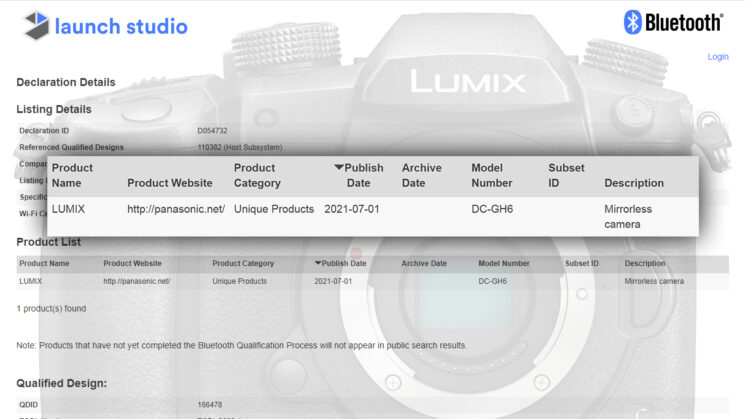 Panasonic has now registered its upcoming Panasonic GH6 Micro Four Thirds mirrorless camera and completed its Bluetooth Qualification Process. It’s hardly surprising that the Panasonic GH6 would support Bluetooth 5, although this registration confirms that Panasonic is indeed working on it as promised and we’re not just going to be stuck with the mostly incrementally updated GH5 Mark II.

Still, this registration does not necessarily mean that the GH6 is going to come any time soon. Virtually no real specs of the GH6 have been released, beyond what Panasonic let out on its initial development announcement, and the only leaked info we’ve seen so far that looks even vaguely believable is that Panasonic might finally offer phase detection autofocus.

The registration comes by way of Nokishita, who spotted it first and posted it to Twitter. Even though the GH6 is still quite a way off being released, we do have some info, which Panasonic released during the development announcement for the new camera.

Now we know it’ll have Bluetooth 5 (but that was pretty much a given, as it’s pretty standard now) and possibly phase detection autofocus.

Beyond that, we’ll have to just wait and see… Or, keep waiting and seeing. For now, you can see the registration here.

« Is there really that big of a difference between 12-Bit and 14-Bit RAW?
Thinking about buying used camera gear? Watch this first »