If you are sorry about The Onion stopping its presses (but still go there daily online) you are going to love New Camera News.

The site which seems like your regular News, Trends & Reviews blog gives a Tongue-in-cheek view on everything photography.

The site seems to be run incognito of actually by a descendant of one mysterious grandpappy Cyrus:

“New Camera News has been covering new cameras since the mid 1800s, when our great great great great grandpappy Cyrus exclaimed with much drama, “I’m going to start a website that covers cameras!” We all thought that he was daft (and he was, according to the most prominent physicians of the day), yet he persisted, first scratching out the news on a piece of parchment that he would carry around the village and thrust into peoples’ faces, much to their chagrin, and then, once his cousin John got a hold of one of those newfangled “typewriters”, on better parchment.… …That’s our story and we’re sticking to it. … If you’d like to contact or compliment us, send an email to info@NewCameraNews.com. Insults should be sent to info@DPReview.com.”#

Being a former techie, I did of course try a whois search to see… well… who is behind the site, and came up empty. The small copyright notice at the bottom points to jf digital llc from New Jersey, but you can never be sure.

If you want to get a feel for the site, here are excerpts of the top three trending stories right now:

… “Starting in January, I will be wearing a GoPro action camera mounted to a helmet daily, in the Oval Office, in meetings with foreign dignitaries, in the State of the Union address, and on Air Force One. At the end of each day, the videos will be posted on the Presidential YouTube account for posting on Reddit, Facebook, and other social media sites. Photos from the GoPro will be uploaded to Flickr. Revenue generated from the advertising will be used to pay for Obamacare.”

This may have been coincidental, but the whole entire world yawned at the exact moment that Microsoft announced the new Photosynth software. The new version of the software lets users create “Dreamlike 3D” images. You know, kind of like Apple QuickTime back in 1997. 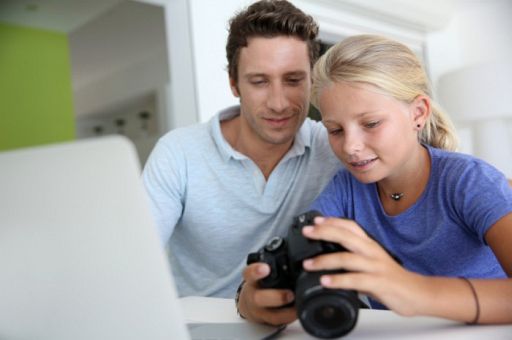 It’s every photobuff parent’s dream–to have their child share their passion for photography, to love the hobby that brings them so much satisfaction and joy, and to watch their child’s photographic vision blossom under their loving, watchful, mentoring eye. Amateur photographer Honda El Camino was living that dream. His daughter, Sonata, first showed an interest in his hobby ten years ago when she was just two. It was a cute moment, little Sonata raising the Pentax MX up to her eye, mimicking what she’d seen her dad do a thousand times before. She didn’t know how to press the shutter, but everyone around had a good laugh….

…But then something went wrong. Very wrong. Sonata got an Apple iPhone for her twelfth birthday. And she hasn’t touched a camera since.

News Corp Australia sacks most of their photographers to cut costs