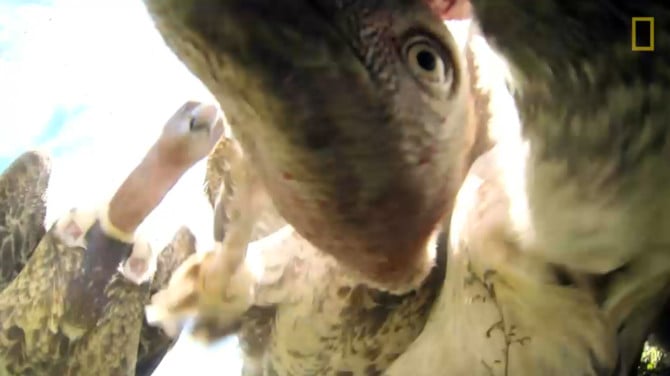 The huge popularity of action cameras has resulted in endless point-of-view videos, used anywhere from sharing with friends on social media to high-end commercial productions, with varying levels of awesomeness.

While many of these videos are nothing to write home about, and the POV-style video is getting a bit old, the people over at National Geographic hit the nail on the head with this one.

Featuring a great subject, location, concept and cause, this video shows what it looks like to be eaten by vultures in Tanzania’s Serengeti.

In the video you can see the setup of the camera in a wildebeest carcass and the vultures rushing in to eat as soon as the jeep leaves the scene.

The make of the camera used by videographer Charlie Hamilton James is not mentioned but judging by the feeding frenzy, the birds did not seem bothered at all by its presence.

Remember that good cause I mentioned? The video was created to promote awareness for the plummeting numbers of vultures around the world (up to 95% in some areas), which will be covered in the January 2016 issue of National Geographic’s magazine.

Until the magazine comes out, you can check out this article about why Africa’s vultures are “collapsing toward extinction”.

For more animal POV videos, this time from the perspective of live animals, have a look at this underwater turtle interaction and a military disaster dog searching for earthquake survivors.