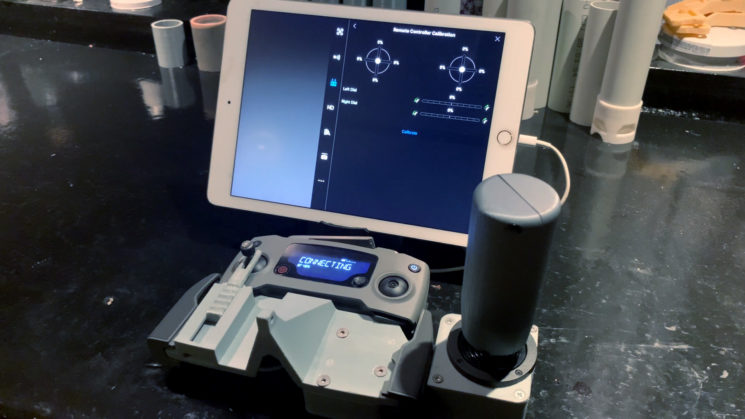 I’m having a go at converting my DJI Mavic 2 remote controller from two thumbsticks to a more Aircraft style controller where a whole hand joystick controls Pitch, Roll and Yaw and the left stick only controls Throttle / Altitude.

The first step is opening up a second-hand remote I bought to see if this is possible. 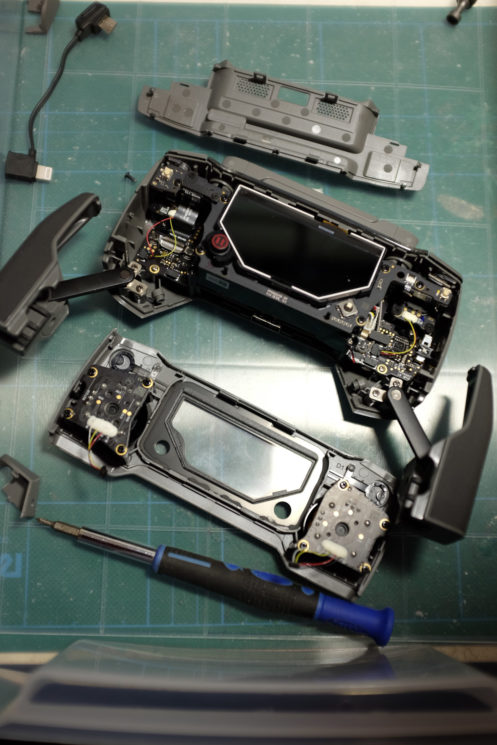 Looks like I can solder on to the back of the thumbstick connections and access the photo trigger button contacts. So looks good up so far.

I managed to get two wires on to the trigger switch contacts, though the soldering iron melted a bit of the case. Should be fine. 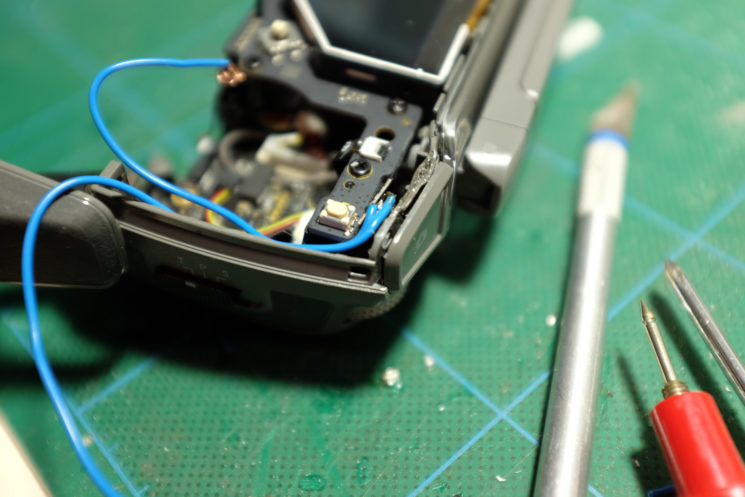 Soldered wires to the contacts on the back of the thumbsticks.

Three to the yaw control on the left stick. And four to the Pitch and Roll contacts on the back of the right stick (They share 3.3v and -v). 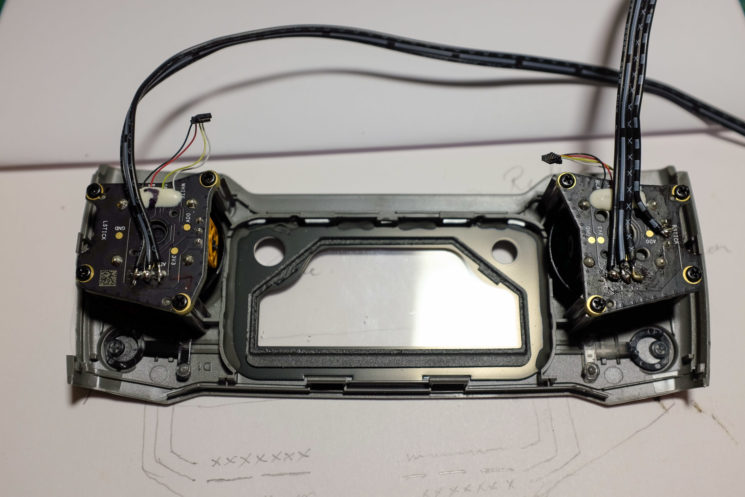 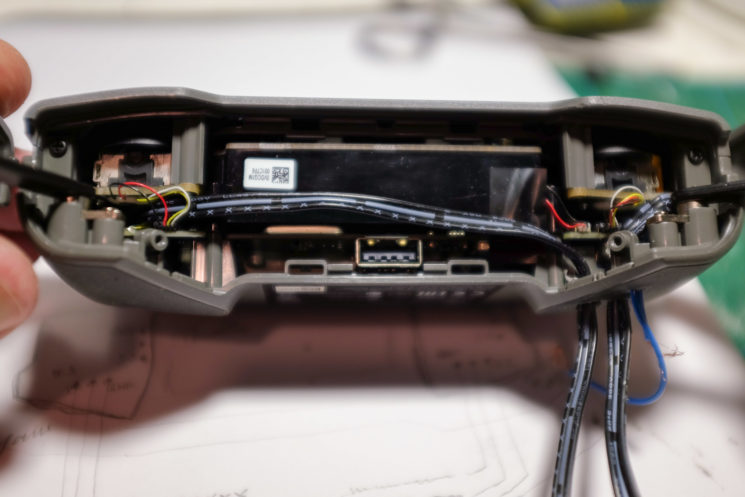 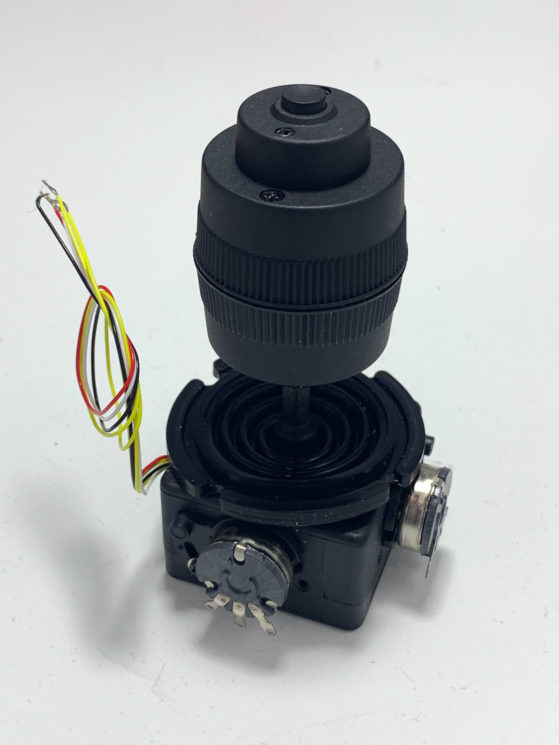 The little bundle of wires is from the top switch (which will be the new photo trigger) and the twist axis which will become Yaw.

The two Potentiometers in the base will become Pitch and Roll.

These are the designs for the 3D printed parts. 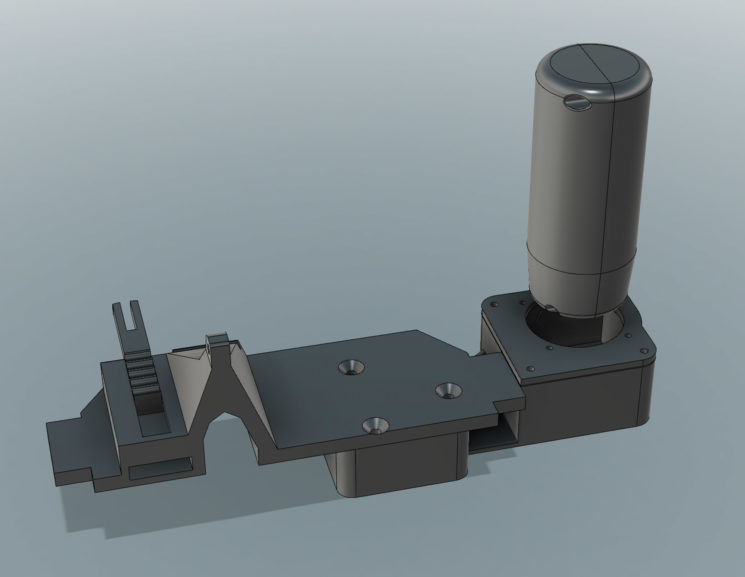 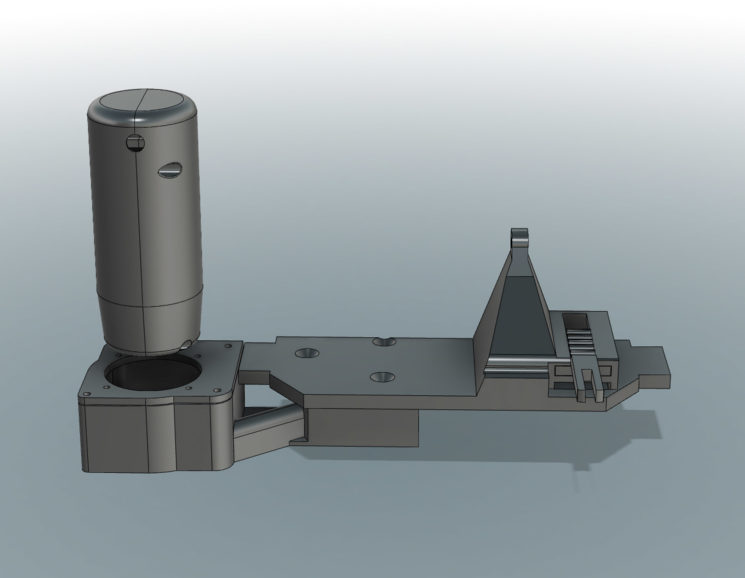 The two main parts are a frame that fits into the original controller phone mount and supports a bracket for my iPad. The second structural part supports the new joystick and wiring. I designed a handle to go on the Joystick to give a more solid hand feel to it and moved the trigger button to the front for trigger finger operation. The little fork like slide is designed to restrict the existing left controller stick from being able to be moved left and right but allow it to still move forward and back as the Throttle / Altitude control.

Inside the new Joystick handle, I’ve lengthened the cables and moved the trigger button to the top front of the 3D printed extension. 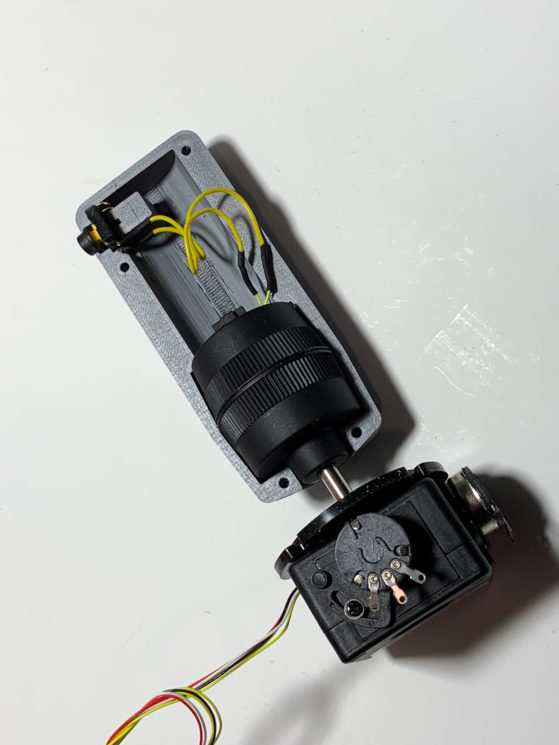 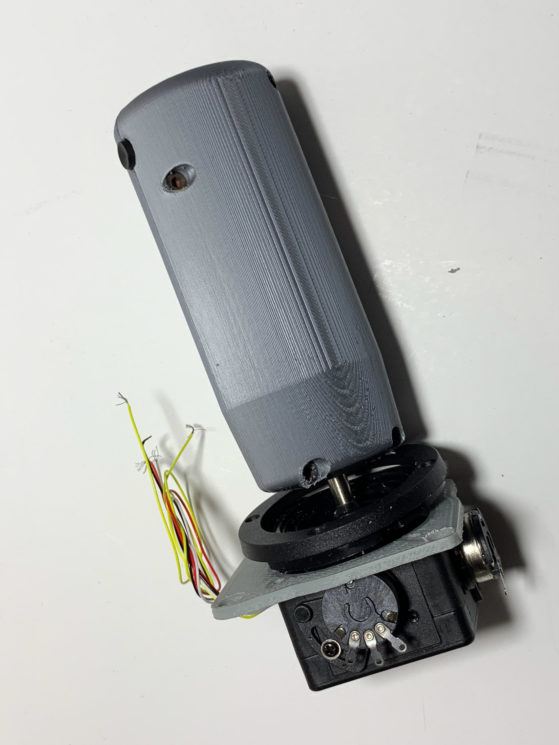 Wiring it all together.

No photos of that I’m afraid. But it’s pretty simple, tho it may not look it in my wiring diagram. 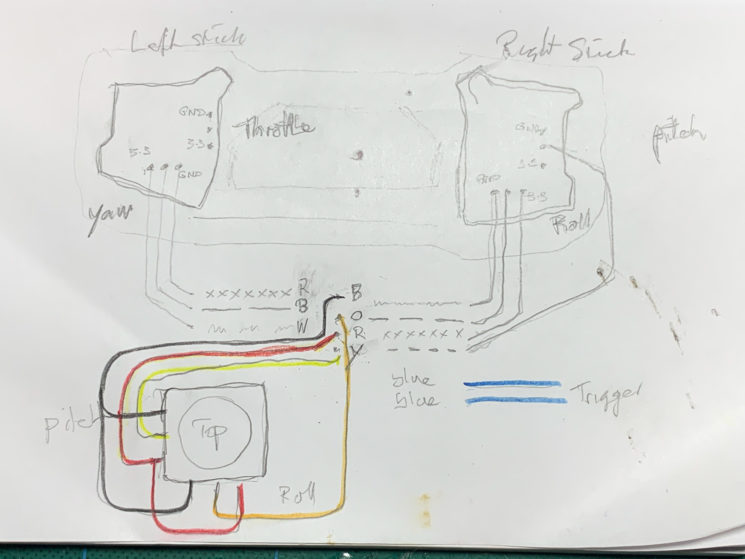 All fitted together and bench testing accomplished.

The 3D top plate needed a redesign to move the iPad support further to the left and away from the new Joystick.

Field testing next. But of course the weather has not been playing nice for the last three days.

It flies beautifully, super smooth movement and everything works perfectly, except for one thing I forgot about. The photo trigger button on the OEM remote is two-stage.

The first stage of the press is the focus, the second stage fires the shutter.

I’ve only wired into the focus stage.

Next step then is to go back in. Install two new wires to the shutter trigger, run them through to, and then through the new Joystick and find a two-stage button or a way to use two buttons. Which will of course require a redesign of the Joystick handle. Arrrrgggghh, so close.

You can view the first field test here.

Diving back in to add the second (Vital) stage of the camera trigger.

I had to go a lot deeper into the remote to get to the second stage connections to the photo trigger button.

I ended up cutting out the mounting structure for the OEM button to figure out how it was put together. Simpler than I thought. The trigger button circuit board is double side taped to a piece of the internal framework. I added two new wires and routed them out then reassembled the remote.

I had to completely dismantle the new joystick to route the two new cables into the handle. I was lucky enough to find a two-stage button in a box of electronic bits and pieces I’ve retrieved from surplus electronics over the years.

A redesign of the handle to accommodate the new, larger, two-stage trigger button. 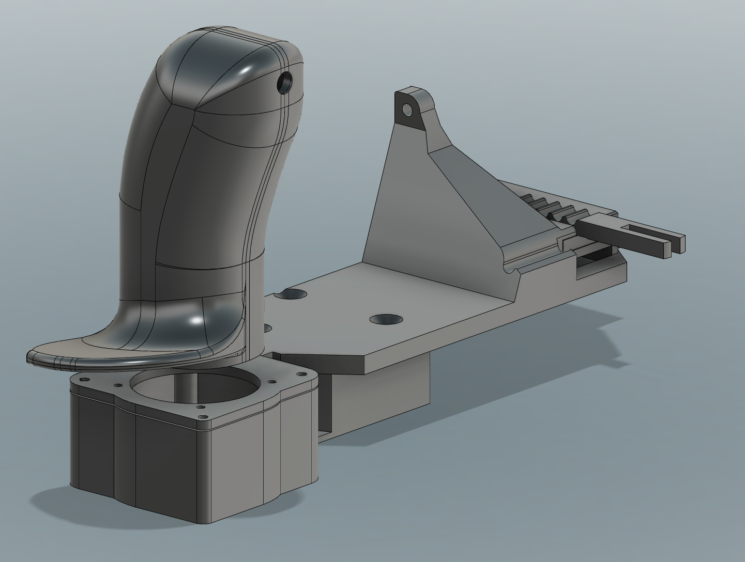 I took the opportunity to add some ergonomics. Much more comfortable.

Bench test went perfectly. All axes are working, plus focus, plus shutter trigger.

Next stage is practising with this new mode of flying.

I have now used my new and improved Mavic 2 Pro remote control on a few commercial jobs and I am loving it.

The large handle joystick allows me much finer granular input over the three axes it controls. (Pitch, Roll and Yaw) Small movements of the stick equal small inputs and small reactions.

Whereas with the original thumbsticks fine movements were much more difficult and hence fine, smooth control was harder to achieve. Not to mention the contortion required of your hand in order to get your thumb on the stick, index finger on the shutter button and support the remote with the other three fingers.

I mostly use my Drone to shoot still images. My primary impetus for building this modification was that the Mavic 2 Pro interrupts the FPV video feed while it takes the photo. It’s only about half a second I suspect. Which is fine if you are hovering over a house shooting real estate images but is pretty scary when you are flying backwards at 70kph a few metres in front of a million-dollar powerboat.

With the original remote I would get the drone in position, fire the trigger as I pulled the right stick backwards to ensure the yacht didn’t run into the drone, wait for the video feed to return, sigh with relief, get back into position and repeat. Now I can much more easily match the yachts speed and maintain the position between shots with a much higher degree of confidence.

Some samples of the type of shots I use my Mavic for. 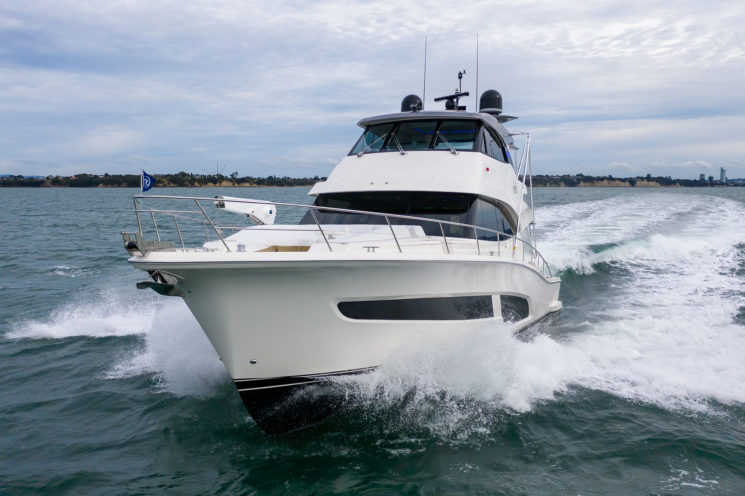 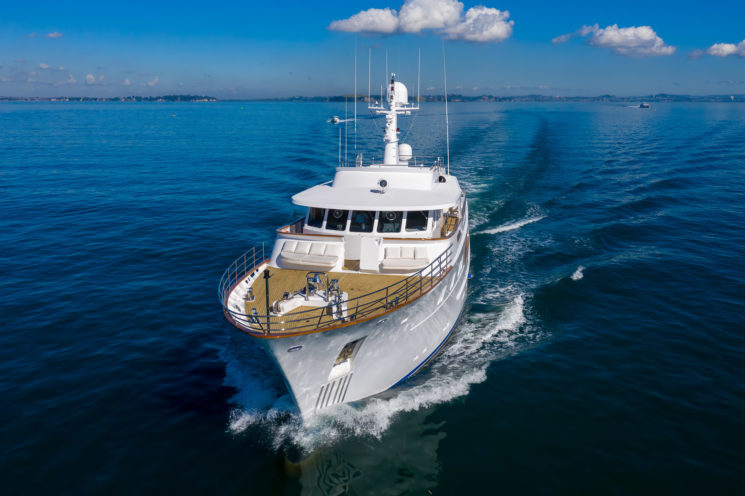 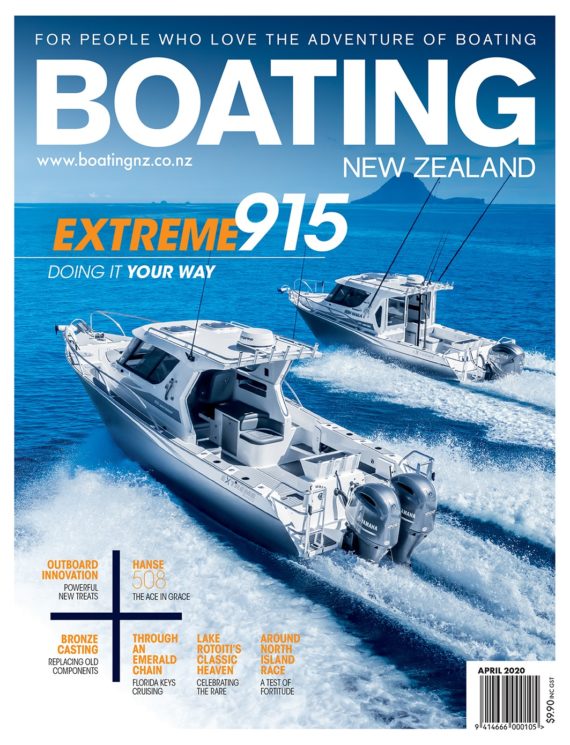 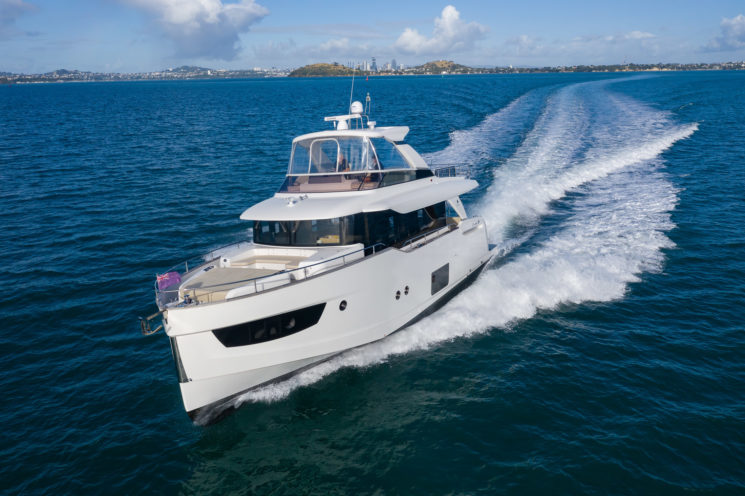 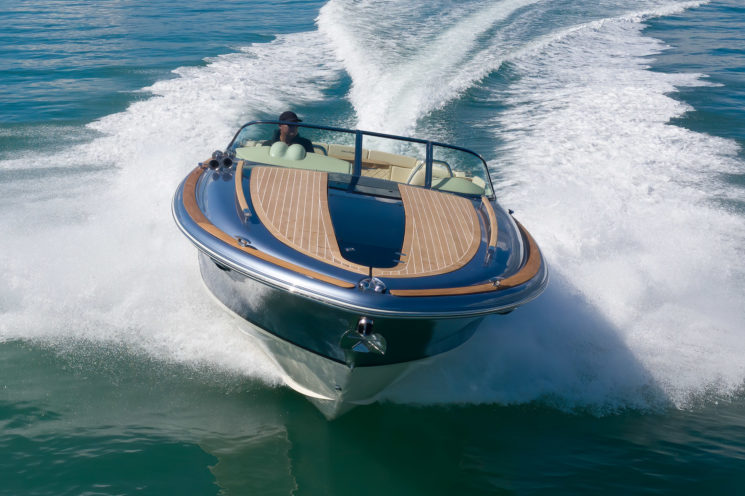 Chris Cameron is commercial photographer based in New Zealand. After spending many years travelling the world as paid crew on yachts, he switched his vocation to photographing them. You can find out more about Chris on his website. This article was also published here and shared with permission.

Syrp’s new Genie Micro is an all-in-one smart remote controller for your camera
« Android users, this app will tell you if your phone camera is spying on you
This is how Canon’s Dual Gain Output works on the new EOS C70 4K camera »