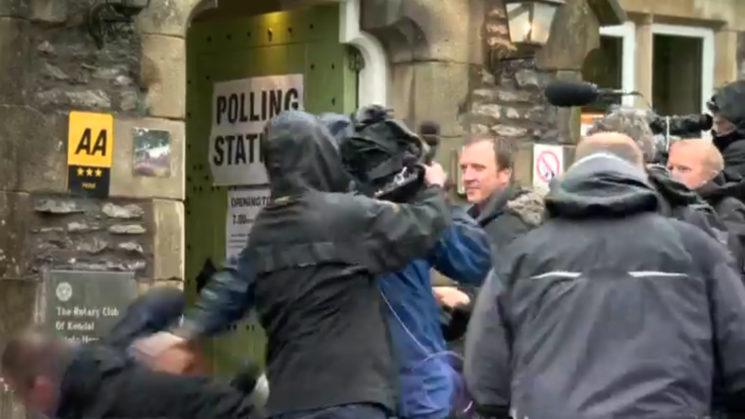 For those that don’t live in the UK, there’s a general election going on at the moment. Today is the day we cast our votes. This particular polling station is where Tim Farron, leader of the Liberal Democrats, happens to be casting his. And as is likely around the polling station of each party’s leader, the entrance is littered with the media.

It seems that here, though, a photographer and video camera operator couldn’t agree on who was going to be standing in a particular spot. They both wanted the same shot as he was coming out, but to quote Connor McLeod, “There can be only one”. A quick shove starts to turn into something a little more determined as this 18 second video plays out.

They say that election time brings out the worst in people. It’s the same all over the world. Although it’s usually down to a difference in politics than anything else. This, though, isn’t much more than a playground scuffle over nothing. To say that they’re acting like children would be something of an understatement.

There’s no information on exactly which organisations these people work for. But I can’t imagine their employers will be best pleased. Especially if their little quarrel caused them to miss the shot.

That commentary, however, is absolute gold. Does anybody else wish there was another camera pointing back at the lady providing narration? I’d have loved to have seen the expressions on her face as the event unfolded.