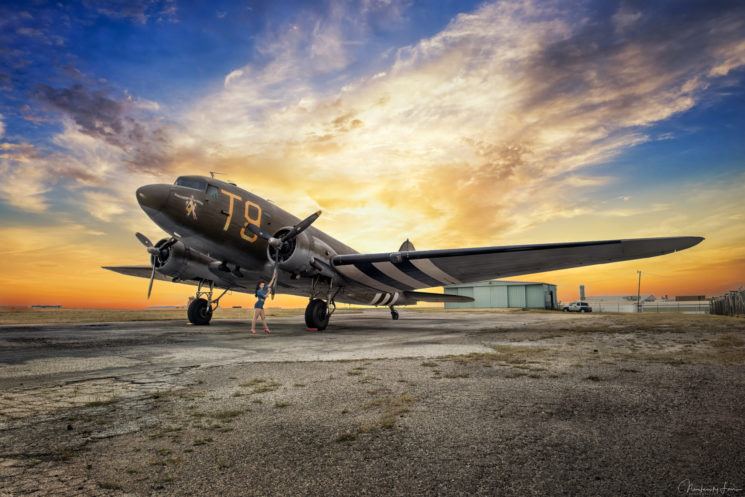 Sometimes, we manage to find ourselves and our cameras in the coolest and most unusual of locations. It might be intentional, it may be completely by accident, and sometimes we’re being set up. The latter is what happened here for Texas based photographer, Keydrin Franklin.

Having recently spoken at Fort Worth Camera’s annual Foto Fest event, the organisers set him a challenge. This challenge resulted in the creation of the image above, amongst others.  When we saw it, DIYP reached out to Keydrin to get some more information on how it all came together.

I actually can’t take credit for this one. As part of Fort Worth Camera’s annual FotoFest, they made this shoot possible. The concept was theirs and Gabby was kind enough to pose as Rosie the Riveter. She did an amazing job!

One question that always pops up is how photographers get access to shoot at places like this. So we asked Keydrin how he got access to this one.

Fort Worth Camera and the Vintage Flying Museum collaborated to make this event possible. During this particular photography event, a limited number of people were allowed to shoot Gabby with the historic “Southern Cross” C47 serving as the backdrop. 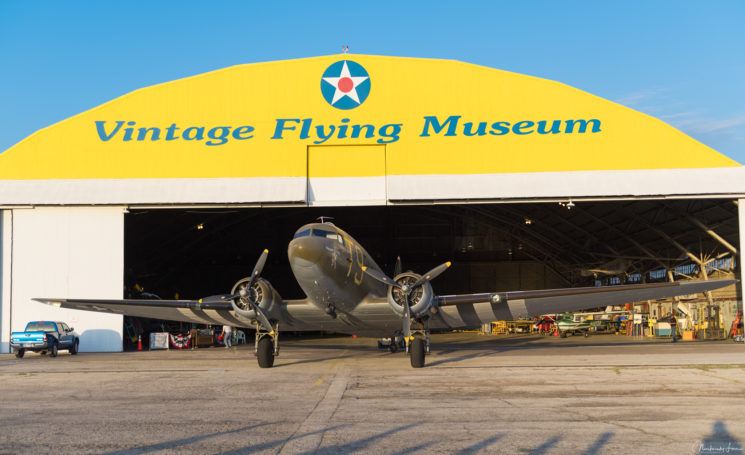 I arrived earlier than the other photographers to capture a specific image (below). I was instructed by a museum representative to stay within certain perimeters to ensure my safety, as we were shooting on an active ramp at an international airport. 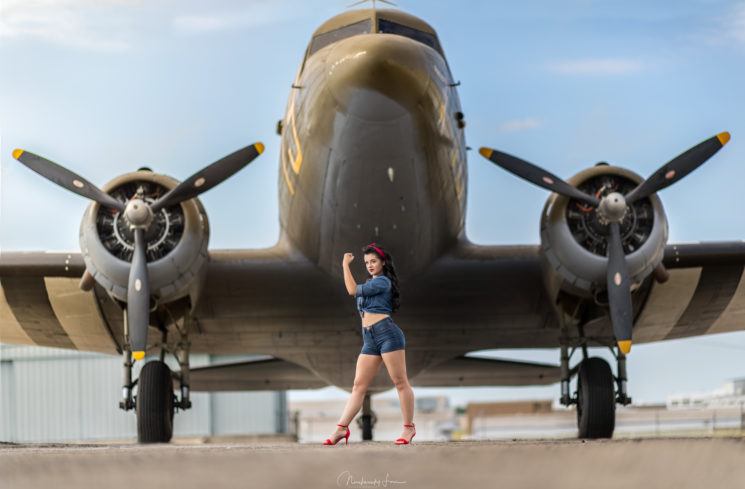 Keydrin did offer a few words of advice for photographers seeking locations, though.

I am a very outgoing individual. Cold calling venues is not something I have a problem doing. I say just go for it! The worst they can say is, “No.”

I have also found that many places don’t mind you using their venue as a backdrop as long as you follow their rules, remain respectful, and pay any necessary shooting fees.

My experiences are pretty much the same. If I stumble upon a location that would be cool to shoot at and it’s on private property, I just ask. As Keydrin says, the worst they can do is say no, and if that happens, you’ve lost nothing. They could just as easily say yes. Sometimes there may be a fee involved, but unless they get asked a lot, I’ve found there often isn’t.

This location is a little different to the kinds of places Keydrin normally shoots, though. It offers up a new set of challenges. And a full sized C47 is a big of a large prop for a photo shoot (no pun intended). So, we asked him about his equipment choices for this shoot, and how they differ from his regular go-to gear.

For this shoot, I chose to use the magnificent Nikon D5 paired with the Nikon 24-70mm f/2.8. Although I would normally use this lens for landscapes, it performed well for this portrait session. I also employed the Nikon 105mm f/1.4 and the Nikon 200mm f/2 VRII.

The Nikon 200mm f/2 is a favourite of Keydrin’s, but with a lens that long, one has to wonder just how far back he had to get.

Directing your subject can be a little tricky at that kind of distance, though. As can communicating with your assistants to adjust lighting, etc.

I used to yell, however, losing my voice was no fun. Now I use a pair of Sony ECM-AW4s which have a range of 150′ (~500ft) with line of sight. During this session, I encountered reception issues so I had to use my handy voice to direct.

When it came to the lighting gear, it was fairly straightforward. Just two lights.

For lighting, I utilized the Flashpoint Xplor 600 TTL. A representative from the Mac Group was also on-site with the Phottix Indra 500, so I had the chance to try out this new product. Modifiers used were the Westcott XXL octabox and 38″ Phottix octabox double diffused. And, as always, my assistant was using the Photoflex LiteReach pole. 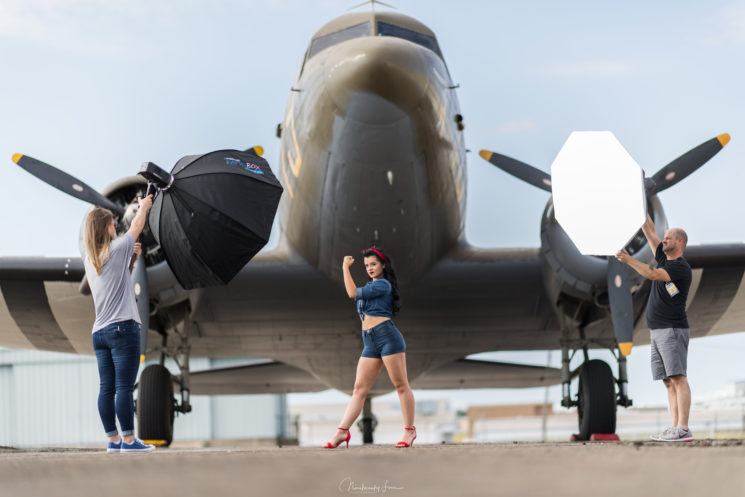 The original shot of Gabby as Rosie the Riveter, including assistants. These were removed and replaced from another photograph of the plane in post.

The post processing on the above shot was pretty straightforward, Lightroom with a little compositing to remove the voice activated lightstands.

But not all of the images were so easily created. The image right at the top of this post is actually a composite of 30 separate photographs. This required a fair bit of planning and technique, as well as post work.

Going into this shoot, I already had an idea of how I wanted the image to turn out. First, I set up the composition on a tripod and set the f stop and ISO. From there, I took 4 images for the HDR process that would happen later in post, then I took a long exposure for the sky, but ended up just replacing it all together.

The other 25 images were different light shots of the aircraft that I merged together in post. I started out having Brandon (assistant/friend) hold the light for the first few images, but then decided to light the aircraft myself and have Brandon hit the shutter since I knew exactly how I wanted it lit. See images below. 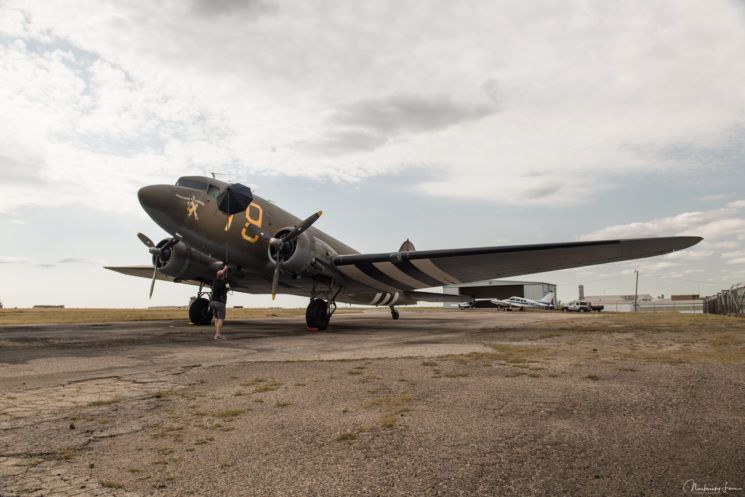 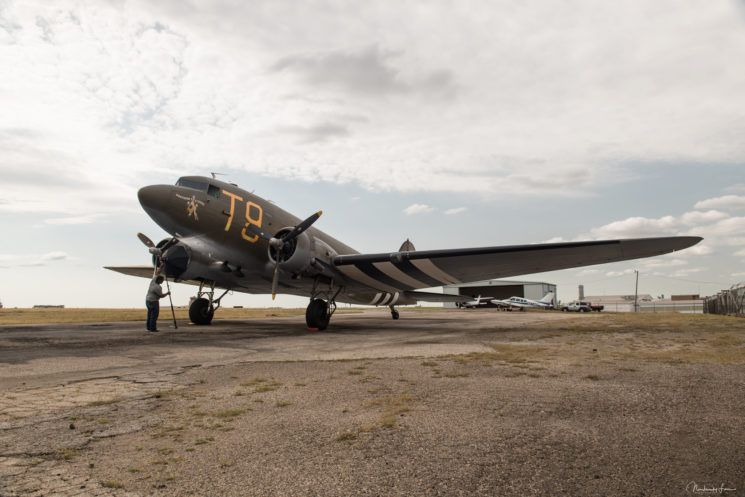 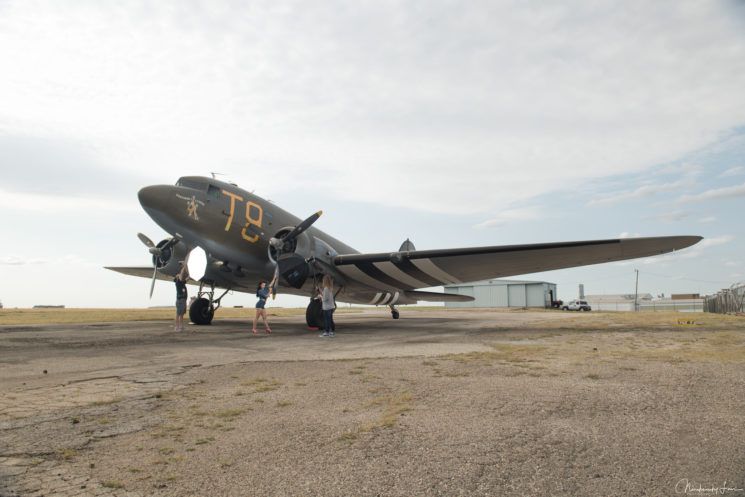 Lightroom is my go-to for basic edits and exposure adjustments. I merged the 4 images for the HDR process in Lightroom. Once in Photoshop, I merged each image individually, ensuring they were lined up correctly. I used to merge all images at once and create mask, but now I prefer to do them individually.

After merging the images, I began the process of toning and replacing the sky. Once I feel I am satisfied with the image (and save it…this is important), I take a break and come back to the image a few hours later with a fresh set of eyes.

Keydrin accepts that HDR, exposure blending and replacing skies might not be everybody’s cup of tea. And that’s ok. It’s not Keydrin’s usual thing, either. But he did have a few words to say on the topic of experimenting with different styles and techniques.

Photography is a form of art, therefore it requires practice and patience. We should never stop learning new techinques and ways to evolve… that’s what makes this industry so freaking great. In the words of Joe Edelman, “Your BEST shot is your NEXT shot!”

Or, in Keydrin’s case, the next 30 shots combined into one.

Thanks for taking the time to chat with us, Keydrin.

If you want to find out more about Keydrin and follow his work head on over to Ninetwentyfour Photography. You can also catch his behind the scenes adventures on YouTube and Facebook.

« Sony releases firmware to address the A9 overheating issue, and a bunch of other bugs
Media photographer and camera man scuffle outside polling station »