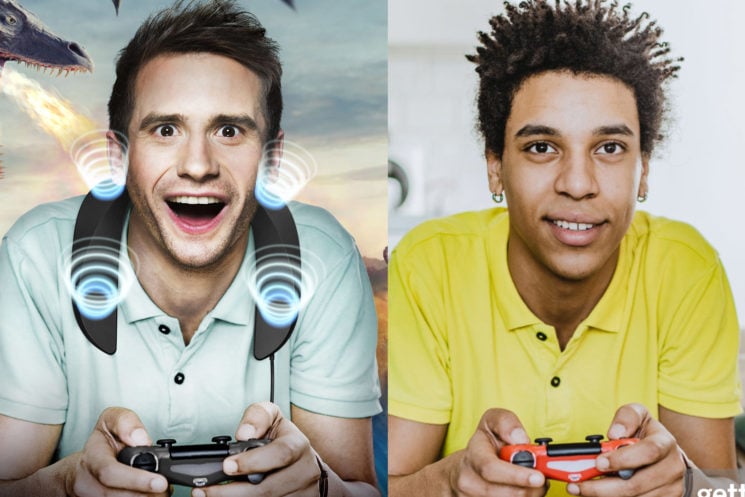 Panasonic recently found itself in the center of attention for all the wrong reasons. The company published a series of weird composites to promote its wearable speaker SoundSlayer. One of the images consists of a white man’s head on a black man’s body, with skin tone altered to match. And not surprisingly – it has sparked a lot of controversies.

As  The Verge notes, Panasonic didn’t bother to take photos of its product on models. Instead, they just used royalty-free photos from Shutterstock and Getty Images and created (pretty ugly) composites. I’m not surprised by choice of royalty-free photos, though. Using them is way cheaper than hiring models, photographers, and make-up artists.

Still, what is surprising is that one of the composites was made from a black guy’s body and a white guy’s head (and a dragon, but that’s less important). Whoever made the composite made the body skin lighter so that it matches the face. They also changed the color of the T-shirt and the controller.

The image of the black guy was taken by blackCAT, and it sells on Getty Images. Sean Hollister tweeted the composite and the original side-by-side. You can clearly see that these are the same hands, throat, T-shirt, and controller.
Embed from Getty Images

Here’s a quick juxtaposition to make it even clearer: this Black man’s head was digitally replaced. pic.twitter.com/X8Ac1IlDu6

The image caused quite a heated debate online. Some folks claim that this is a racial thing and that the ad erases the black man’s identity. Other folks believe that this is just a matter of the effect the agency wanted in the ad. The white guy has an amazed expression, and the black guy has the body posture they were after.

As kidhack notes on Twitter, Panasonic most likely “had no idea” that this was photoshopped.  “To be fair, this was most likely whatever ad agency they used, and that creative director approved this,” they write. “What’s bad is that CD probably told the designer that the person needed to look more excited/amazed, or worse, white.” I sure hope it’s not the latter, though. I like to believe that they were simply after a more excited expression, not a person who’s “more white.”

The Verge brought the issue to Panasonic’s attention. As a result, the company pulled every SoundSlayer promo image that contains a human being (better safe than sorry, I guess). A Panasonic rep said that the company’s “still looking into the matter,” but that’s about everything we know for now.

Once companies buy royalty-free stock photos, they can do with them pretty much whatever they want. Just remember Samsung and their use of my DSLR photo they tried to pass as a phone shot. Since they bought it through Getty (or at least I assume since Getty never replied to my emails), I didn’t have a say in it. They photoshopped the hell out of me, but hey, at least they didn’t replace my face with someone else’s.