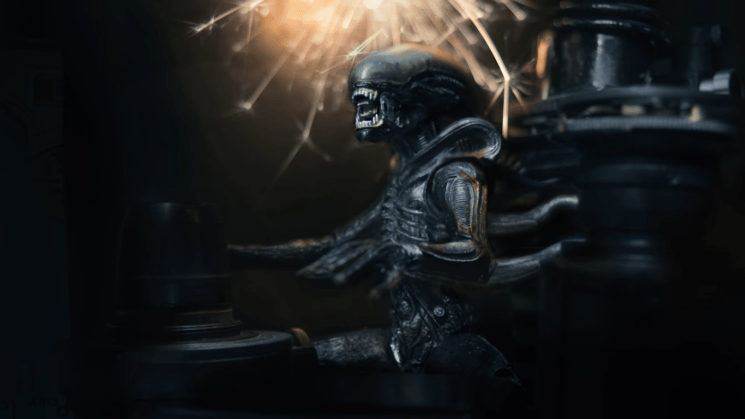 Depending on where you live, you might have already watched Alien: Covenant or you’re only a few days away from the premiere. Either way, you can play a bit and create some toy photos with an Alien figurine. When you’re a photographer, you can never be too old for toys, right? Mathieu Stern shares an idea and a quick tutorial for toy photography dedicated to this cult movie. It takes a macro lens and a couple of items you have at home, and you can make a photo worth a movie poster.

The final result is a combination of different photos which were later blended in Photoshop. Mathieu starts by taking a photo with the lights off. He light paints scene with the flashlight on 10 sec exposure. Then, he takes another set of shots in the dark and with a long exposure, but this time he uses the sparkler.

When you’ve taken the shots, it’s time to blend them in Photoshop. Use the photos you like best and that reveal the details you want.

Mathieu shows his workflow in a very fast-paced video, but the main point is in importing the photos as separate layers and masking the parts in and out of the shots. He adjusts the contrast using curves, then color grades the photo and crops it, and this is the final result:

Although the editing tutorial is pretty quick, it involves pretty much the basics, like masking, adjusting contrast and color grading. The trick is in revealing the parts you like with masks, and you can experiment further with tones and contrast to your liking. I find the idea pretty awesome, and it’s definitely a great way to pay a tribute to Alien. And find an excuse to play with toys, too.

« Getting perfect exposure every time with the meter you always have with you
“MySpace Tom” became a photographer after selling MySpace, and he’s darn good »