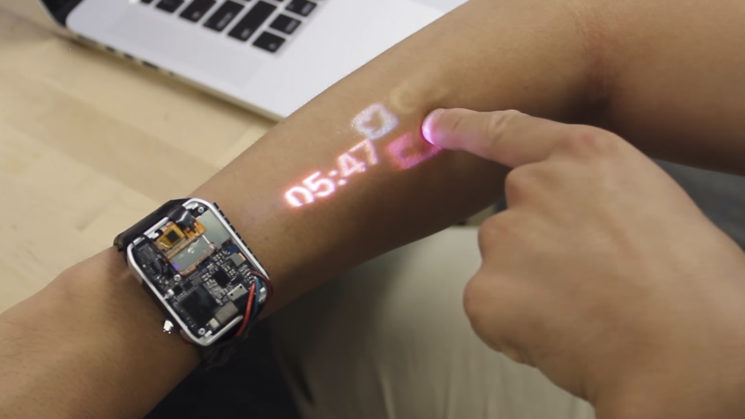 The idea of a smartwatch that could project a “screen” onto your arm with an interactive touch UI has been around for a while. But up until now, they’ve all either been vapourware or concepts. Now, though, it seems to be a reality, in the form of the LumiWatch, developed by researchers at Carnegie Mellon University. Although, it doesn’t actually look very good. In fact, it looks quite terrible.

But, all technology has to start somewhere. And for such a tiny unit, it’s rather impressive. The small wrist-bound device contains the logic board, projector, depth sensor, and battery.

The projector uses three red, green and blue lasers, which are bright enough to be seen outdoors, although the colour doesn’t look quite as accurate as many of the previous concepts we’ve seen. It has continuous 2D finger tracking, houses a quad-core Qualcomm 1.2Ghz CPU, 768MB RAM, 4GB flash memory and has built-in Bluetooth and WiFi.

At the moment, the device is a prototype, and you can read more about the technical details in this paper. So, you have to bear that “prototype” status in mind when looking at how bad this item currently is. And, as I mentioned, all technology has to start somewhere. Most really cool tech is pretty bad before it gets good.

I still think we’re a few years off this tech becoming a useful reality, but it is a promising start. There’s no mention of the watch containing a camera, although it would be nice if, when the technology does get to a point where it’s ready to release, we can at least use it to connect to our own cameras. Perhaps stream live view. Although I wouldn’t expect the colours to be all that accurate, especially if you’ve spent too long in the sun.

The researchers say that they would expect the retail price of the prototype model to be around $600. When or if they’ll actually come to market, though, is another matter entirely.

If you want to find out more, check out the complete paper which goes into a lot more detail about how the various systems work and talk to each other.

Beware: Your kid’s smartwatch could be spying on them through its camera

Ready Player One poster ridiculed for bad Photoshop, turns out to be accurate

« Watch a bear sit next to a photographer: it’s both heartwarming and terrifying
This $200,000 Lamborghini is “the world’s fastest purpose-built camera car” »