The Accsoon CineEye has been out for a little while now, but it didn’t launch without issue. Accsoon has listened to user feedback, replaced the WiFi chip, updated some code, and essentially re-released it. We paid a visit to the Accsoon stand at IBC 2019 to find out all about it and how it works. It looks pretty impressive, though, taking a standard HDMI input from your camera and streaming it to a tablet or phone with many of the features you’d expect from an expensive field monitor. 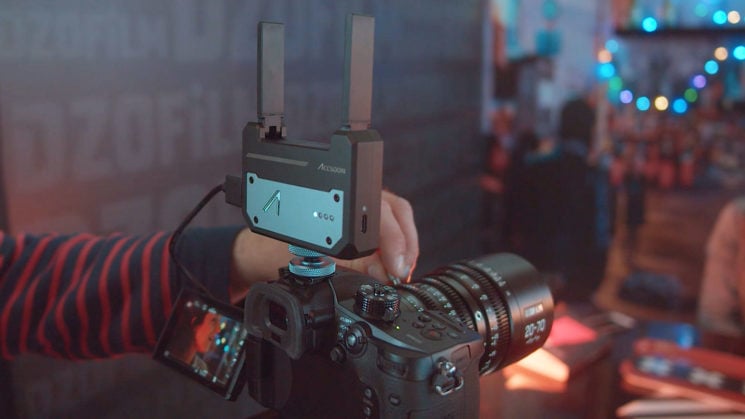 The Accsoon CineEye is designed to sit on top of your camera, pulling video data from its HDMI socket. This is then beamed wirelessly to your phone or tablet, allowing you to use it as an external monitor. Apps are available for both Android and iOS offering a low latency feed directly to your mobile device’s screen.

The mobile app includes many of the features found in dedicated field monitors, including greyscale and colour channel isolation, false colour exposure metering, focus peaking, zebra stripes, safe zone markers, and even LUTs. Unfortunately, there doesn’t appear to be a waveform or vectorscope, though. At least, not yet. Perhaps this is something they could add in the future, though. 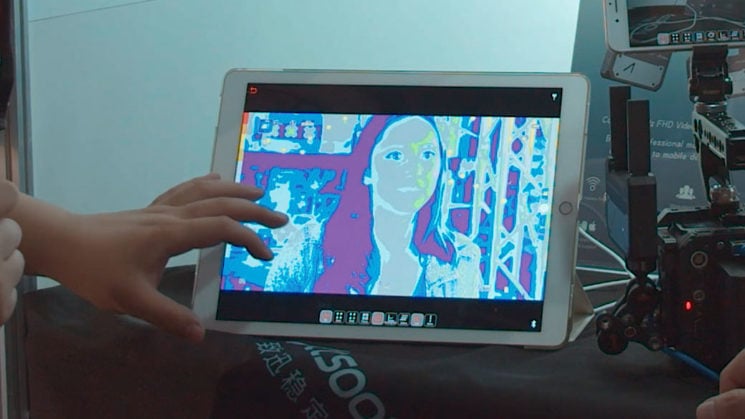 The CineEye transmits in 1080p, as it’s designed more for monitoring rather than recording remotely – although you can record from the mobile app if you wish. The transmitter features a 3500mAh battery, which offers a run time of up to four hours. It allows you to select from nine different 5G channels to transmit to, and you’re automatically prompted if the channel you’re on is weak, allowing you to switch to a stronger one. Transmission range is up to 100 metres. Exactly how far you’ll get will depend highly on your environment.

Measuring only 9x6cm, it’s only a little larger than a credit card. Albeit a 2cm thick credit card. But it’s still small enough to fit in your pocket or a small pouch on a bag when you’re not using it It has a 1/4-20″ screw underneath allowing you to connect it to hotshoe adapters or directly to camera cages via a bracket or magic arm. It also connects to up to four devices simultaneously, too, allowing the camera operator, focus puller, director, and others to all see the camera’s feed wirelessly at the same time.

The CineEye was initially released to something of a rocky start. The WiFi wasn’t always that reliable, causing many users to simply stop using it. But Accsoon has listened to user feedback and beefed up the CineEye with a new WiFi chip to improve speed and dependability. We were told that there would be a recall and replacement programme starting at some point in the near future for existing CineEye owners who have been facing WiFi issues with their devices. There’s not really much to say about it except for the fact that it’s on the way, but we’ll keep you posted as we hear more.

The units being shipped now are the upgraded units with the new WiFi chip. The Accsoon CineEye is available to buy now for $219.

Convert any Android phone into an HDMI monitor