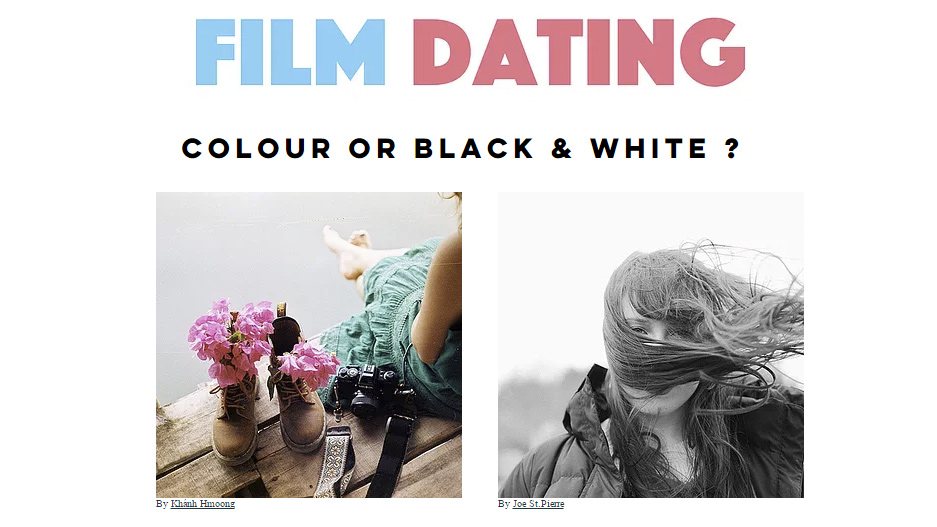 Whether you already shoot film or you’ve only been thinking about it, picking the right film for you can be difficult. There’s so many to choose from, and new ones, are popping up every day. Many film shooters chose long ago what they prefer, but how many did you try before making that decision?

This fun web app from friend of DIYP, photographer Vincent Moschetti, is here to help you out with Film Dating. It’s essentially a short quiz. It asks you to pick some images in order to figure out what you like. Once confident in its assumptions, it suggests a film based on your image choices. I’m not usually a big fan of quizzes like these, but I did think the result on this one was kind of interesting, for me at least.

Basically, the first choice is an obvious one. Do you want to shoot colour or black & white? After that, you’re shown a set of three or four images, and asked to pick which one you like based on things like contrast, tone, temperature and saturation. Ignore the composition and the subject matter. You’re only looking at the properties of the film itself.

What I found quite interesting was that it didn’t suggest the film I normally prefer. Typically, whether 35mm or medium format, my camera is loaded with Ilford FP4+. The test, however suggested something a little different. The fact that it got it wrong, though, was not what was interesting to me.

What made it interesting for me, is that I actually do use a TMAX profile in my Nikon DSLRs for when I want to shoot black and white, and absolutely love the results it provides. I still shoot raw+jpg, so I have that original full colour backup to do a manual conversion if I wish. But, I find that with the TMAX profile, the jpg is usually good enough for my needs.

I do actually have a 100ft bulk roll of 35mm TMAX400 here. I think I’m going to have to start shooting some of it now.

As Vincent says right at the beginning of the quiz, there’s really no such thing as the best film. It’s just a case of the best film for a particular purpose. Unlike with digital, where we can change things in post, the colour, tone, contrast and other elements of our final look are determined by the film we use.

So, before you take the test, think about what you’re going to be shooting with it.

What’s your favourite film? Did the Film Dating quiz suggest what you already use?

Can you get the perfect score on this photography quiz?