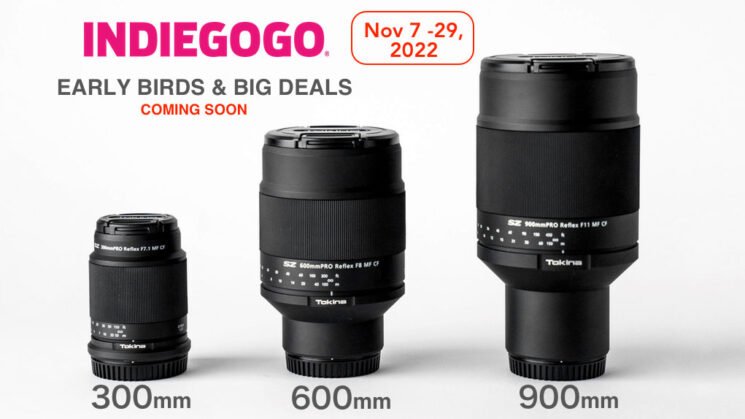 Kenko Tokina Japan has announced three new manual focus lenses for APS-C mirrorless cameras. The three lenses are all super telephoto, being extremely long in terms of focal length all quite short in physical length. This design is due to the fact that they’re reflex lenses. Essentially, they contain mirrors to house a longer focal length inside a shorter barrel. But even for reflex lenses, they look pretty odd.

The three lenses have focal lengths of 300mm, 600mm and 900mm, and they’re coming to Indiegogo. They’re what Tokina calls its “SZ Pro Reflex” line, and the reflex design allows them to be very small indeed with the 900mm focal length lens said to be only 168mm in length. 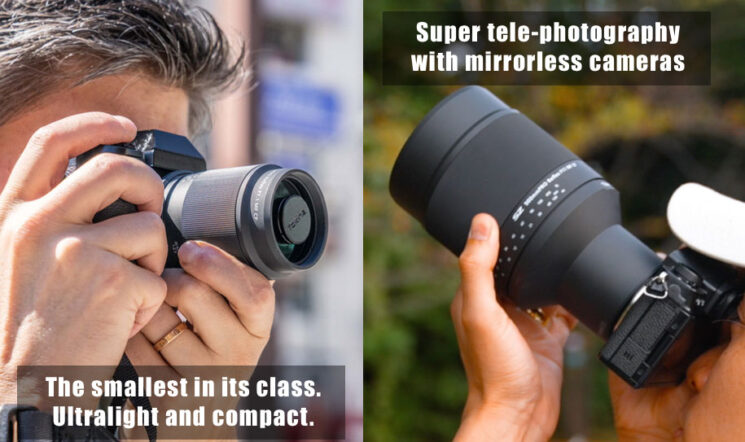 There’s not a lot of information about the lenses yet, except that they’re super small for their focal lengths. We can see from the image at the top of the campaign, though, that the 300mm lens has an aperture of f/7.1, the 600mm of f/8 and the 900mm lens of f/11. Reflex lenses typically have a fixed aperture that cannot be stopped down. So, you’re adjusting your exposure either with ISO, shutter speed or by adding ND over the lens.

The campaign teaser also says that they’ll be coming for Sony, Canon and Fuji. This means Sony E, Fuji X and probably just Canon EF-M. Even though these are manual focus lenses, I suspect a company like Tokina isn’t going to risk rocking the proverbial boat by releasing an RF mount version. Even though they are APS-C lenses, I have to say, it’d be nice to see these come in Micro Four Thirds mount, too. It would be difficult to adapt any of the APS-C mirrorless mount versions to MFT as you could with Nikon F or Canon EF mount reflex lenses.

There’s no word on a price yet or when they’ll go retail, but the Indiegogo campaign runs from November 7th to the 29th, so we don’t have long to wait to find out.

« TTartisan’s new 27mm f/2.8 is a $159 autofocus pancake lens for Fuji X cameras
From now on you’ll have to pay to use Pantone colors in Adobe software »