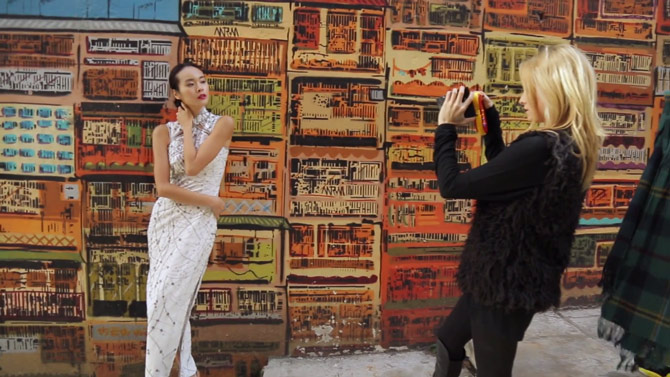 In the latest Cheap Camera Challenge on DRTV, Kai called on the celebrated fashion photographer, Lara Jade to conduct a fashion shoot in the streets of Hong Kong. Though Jade was given a professional model and a couture wardrobe to photograph, the camera Kai had her work with takes the term “toy camera” to an all new low as far as quality is concerned. However, being the creative she is, Jade brings in a heap of little accessories to shoot through including a drinking glass stolen from the hotel and a cheap plastic beaded bracelet she picked up from a street vendor during the shoot.

If you’ve ever seen an episode from the cheap camera challenge, you’ll probably be expecting the images to come out much better than what seems possible.  Lara Jade’s final images are no different considering the obstacles she had to overcome to make decent photos (including a really crappy .3 MP camera).  What’s most interesting about this particular episode is how in control of the shoot Jade is throughout the entire process. There’s certainly a lesson to be learned other than gear isn’t everything which Jade talks about near the end of the clip. I think Kai perfectly summed it up after observing Jade at work:

“Her directions are clear and incredibly detailed. Professional models posed well, of course, but pro photographers know how to bring out the best in models.”