Running with a small crew can be a challenge but if you are coming well prepared, it could be an advantage. Being just one person, or running with a small team means that you can keep things light, move around and generally if you play your cards right, you can set up and teardown relatively fast. While having a big crew is nice, some jobs just call for smaller, light crews.  Today, lets dive into the world of “one man” production.

Specifically in this video, I want to talk about creating cinematic interviews. A one-person team does not mean you need to give up on location, sound, or lighting. Most of it comes down to your approach and choices of gear. Hit the jump to see how I handle this.

In this video, I am interviewing Eyal Yassky, the CEO of Hilico, a company that creates off-grid solutions, you can read more about them here. I really connect with what this company does, so learning about the roots of the company was also a great experience for me.

As a small crew, packing efficiently will take you a long way. I talked a little bit about packing here, but I want to expand on this. For small productions like this, when I am running pretty much solo, I will try and reduce the number of bags I bring to the bare minimum. For a start, I am the only one carrying them, so fewer bags = less work. But also, with the right workflow, you don’t really need a lot of bags.

So yes, it means less gear, fewer stands, and fewer lighting options. But then again, growing in gear, also means you have to grow on crew and budget, and this is not always an option.  So for small production, I will usually pack three bags: A camera case, A tripod/grip case, and a lighting case. 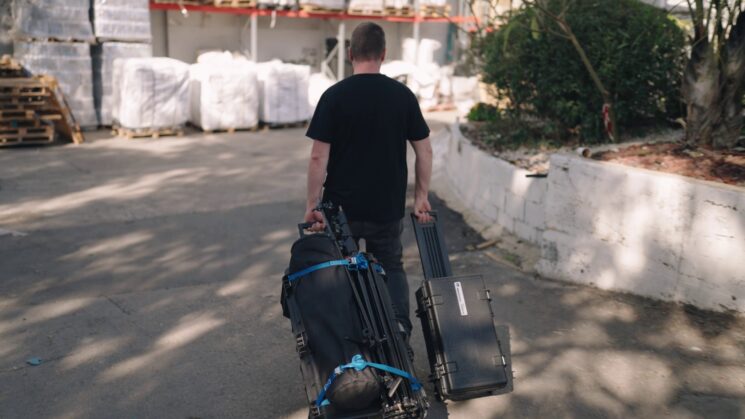 Two of the bags for this shoot are from the new Manfrotto tough line: The Pro Light Reloader Tough-55 holds all the delicate gear like cameras, audio, and monitors. I feel comfy enough with this kind of bag to have it take some beating and still keep the gear safe. Though I do admit that using a foam configuration could be a bit restrictive. Once you set it, that’s it. And there is no going back on configuration without getting new foam.

The second bag is a Reloader Tough-83. Essentially, this is a shell that I can use to “throw” grip gear in; tripods, heads, sliders, and so on. Those bags are great, not only because they are secure but also because they have dedicated strap holders that you can use to mount even more gear on top (did I mention that I don’t like trips to the car?). This way I strap my softbox and the light stand kit directly on the case. 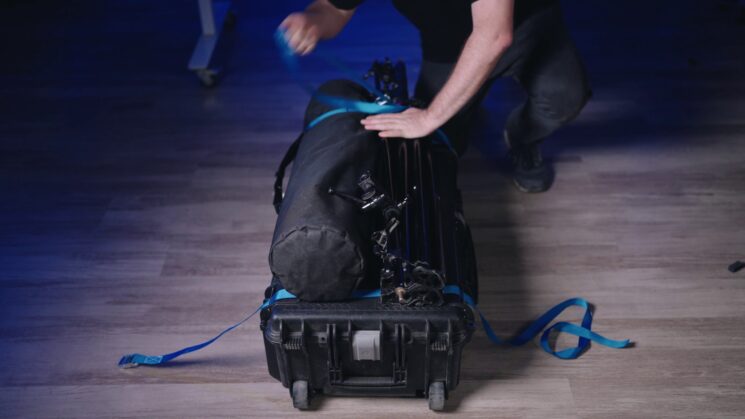 I love the strap holders on these cases

The last case is the Orion 300 case. There aren’t a lot of choices here. This is the case that comes with the light and it’s a perfect fit.

Arrival, settling in, and scouting

When arriving on location, the first thing I’ll usually do is go and say hi to whoever is in charge. I’ll make sure they know what we are doing, and that all the logistics and permits are ok. I do get everything checked and double-checked on the phone beforehand but getting personal with the location crew is important. They know what’s going on, they will have location tips, they know where the good food is, and most importantly, they can help if you need some assistance; an outlet, a few seconds of quiet,  a clear path, and so on.

The next step is scouting. You’ll want to look for a place that is big enough for you, has good composition options, and has sound & lighting that you can work with. With industrial places like this, I usually shoot for either a big industrial hall or if I can, I love using corridors and hallways. I actually found a great corridor for this shoot, but it was too close to the main floor and the sound was not working for me, so after a bit more scouting, I found a nice area that worked well composition-wise. 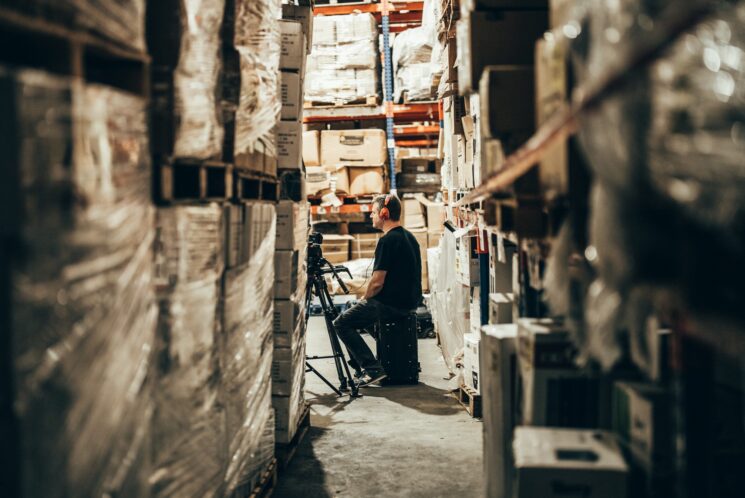 This is actually a BTS photo, but you can see who hallways can work really nicely for composition

Running solo means being a bit more frugal on lighting gear than I’m used to. I brought one big light, the Orion 300 (love the color accuracy on this beast), and a reflector. This is usually enough to create reasonable lighting. 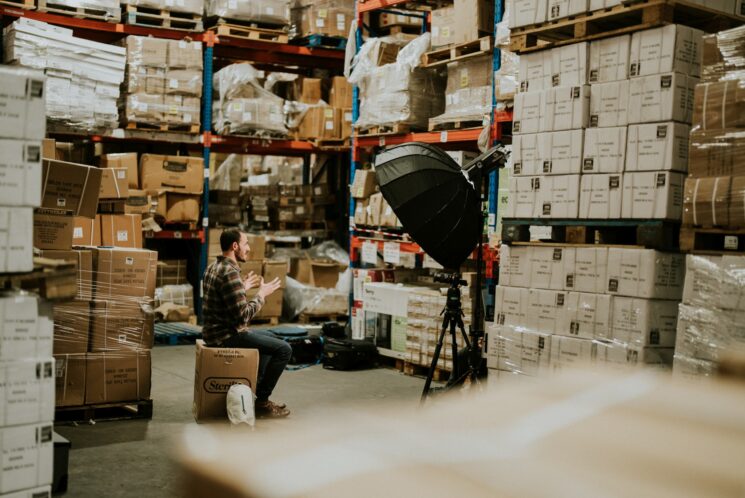 In this case, I had little control over the horrible light that was coming from the high bays, and I just used the light to make Eyal pop a bit from the background. Playing around I started with a classic 45/45 position, but it created too much contrast and I moved the light to be more on axis with the camera. A stronger light may have been able to be bounced as well, but after testing, the reflector didn’t do almost anything here I decided to let it go.

For this kind of work, a lot of times, I’ll be using a small lavalier mic (aka “lav mic”), and recording directly into the Sony FX3. The audio handle on the FX3 is a godsend and the internal recording is just fabulous. A blessed upgrade from an external recorder. I use the Sennheiser AVX system because I love how it sounds and it is super light and easy to use. Using a lavalier and the FX3 recorder really keeps the workflow light. There is a great video on how to use a Lav mic by Rode here.

If you can use two cameras, you should do it. I am using two cameras for this interview: the Sony FX3 and the Sony A7S III. Aside from some usability features, this is basically the same camera with the same sensor, same recording formats, and the same output. The color and behavior of the footage will be identical. The editor is going to bless me in post. If you cant use “the same” camera, using two cameras from the same manufacturer is also ok (ideally with at least the same color profile options). And sometimes you just have to use what you have. 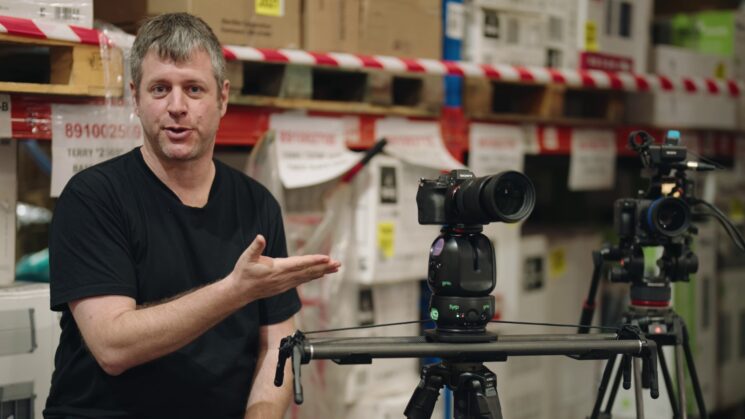 The A-camera is sitting on the Manfrotto 645 Fast Twin leg carbon tripod with a Manfrotto 504x head and a Sony 50mm f/1.2 GM lens on the camera. The second camera is on a Syrp Magic Carpet Slider that will be looping with a Sony 24-70 f/2.8 GM lens. By using two cameras I have more options to cut in the edit. Another thing is that I will be shooting 4K on this project, even though the delivery is in HD. Again, this gives me a few more options for the editing. We have a great video on shooting angles and emotions that you can see here. It covers the composition that I chose for this video, with a short side and a long side at around the two minutes mark.

There are a lot of great interview tips out there. Here is my biggest one: make sure your subject feels comfortable. Unless this is a snippy expose you’d get great interaction from your subject if they are relaxed and sure that you are on their side. Allow for re-takes if needed and don’t be afraid to go on sideroads in your discussion. Some of your best moments may from seemingly unrelated side discussions. This goes for both the actual interview and any inserts you may need.

I hope you got some tools from this video, I would love to know what else you would like to learn.