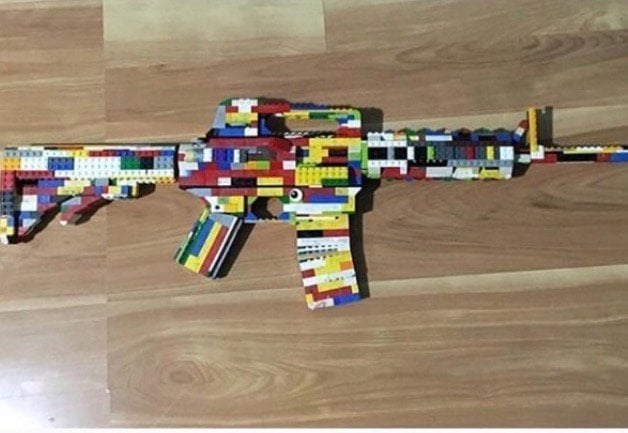 On Tuesday evening, an Instagram post with a threatening message sent a 14-year old boy to jail. The unnamed boy from Lemon Grove, California posted an AR-15-style rifle made of LEGO on his Instagram profile, captioned “Don’t come to school tomorrow.” Reportedly, another student asked him to take the photo down, and he refused. As a consequence, the student was arrested for making a criminal threat.

The boy is a student at West Hills High School in Santee. Catherine Martin, a spokeswoman for Grossmont Union High School District, confirmed in a tweet that the boy was arrested “for making terrorist threats.”

Overnight, @SDSOSantee arrested a @WHHSWolfpack student for making terrorist threats after he posted a photo of a Lego rifle on social media with a threatening message. We thank law enforcement for their quick action. @SDSheriff takes any threats to our schools very seriously.

According to the statement of San Diego County Sheriff’s Department, the assistant principal informed the police that other students were afraid of this boy. The report further reads that the police contacted his mother and step-father, and they learned that the boy had access to hunting rifles. Reportedly, the investigation is ongoing to determine if he had access to other weapons. In the meantime, he was taken to Juvenile Hall under charges of making a criminal threat.

Since the student is juvenile, the Sheriff’s Department isn’t allowed to disclose any information about his identity. But, as they write in the statement, they take every threat seriously.

This isn’t the first time that an Instagram post and a disturbing message have sent someone to jail. We have recently reported about a 24-year-old Ricky Rankin, who posted a photo of an AR-15 assault rifle with a caption “I’m thinking about finally going back to school.” According to other sources, there have been a few more students arrested over similar posts on social media.

Just like in the previous cases, it’s not clear whether the 14-year-old student posted a serious threat, or he was making a bad joke. Whatever the case may be, it’s the police’s job to take every threat seriously, even if they’re not serious. So, after huge tragedies such as mass school shootings, it’s probably better not to make jokes on Instagram. It might get you behind bars even if you mean no harm. After all, it’s a distasteful thing to do anyway.