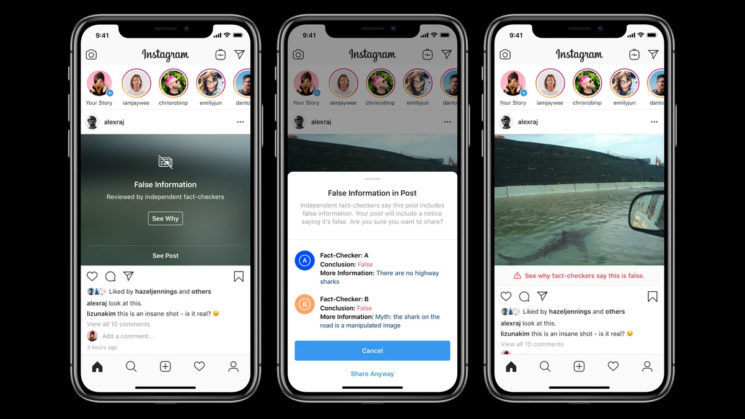 In this age of “fake news” and misinformation, it’s becoming more and more difficult to find truly genuine honest content online, particularly on social media, some platforms are trying to do something about it. In this case, Instagram. Instagram says they began working with third-party fact-checkers back in May in the USA, and now the programme being expanded globally.

Instagram says that when content has been rated as false or partly false by these third-party fact-checkers on the platform, its distribution is reduced, removing it from Explore and hashtag pages. It will also be labelled as “False Information” so that other people can judge for themselves whether or not they want to see it, in a similar fashion to Facebook’s “graphic content” warning.

Image matching technology is used to find any other copies of the images that have been posted to the platform elsewhere (many of them do become somewhat viral), which then also get flagged to help reduce the spread. Also, anything that is flagged as false on Facebook will automatically be flagged on Instagram, too (and vice versa). Provided with the warning is the fact-checker rating along with links from what Instagram says are credible sources that debunk the claims made in the post.

Accounts that are repeatedly found to be posting “fake” content will see their posts become more difficult to find by default, Instagram says, by removing them from the Explore and hashtag pages. And if you see something you know to be fake that hasn’t been flagged yet, you are able to report it for the fact-checkers to take a look at.

Although many photographers probably won’t be directly affected and have their work and account flagged by this feature, it does offer some hope that we may rise up the ranks on Instagram a little more as fake and less valuable content becomes less visible.

You can read more about the “False Information” feature on the Instagram blog.