This has felt like a very long wait for Insta360 ONE X camera owners who’ve thus far had to deal with the mobile apps if they want to get the most out of their camera’s footage. But now, Insta360 Studio for ONE X is finally here, with all of the FreeCapture keyframe goodness that older Insta360 Studio version users have long enjoyed.

Up until now, Insta360 Studio for ONE X had only been available as a beta, and while it supported the FlowState stabilisation it did not offer FreeCapture support which allows you to convert your 360° footage into flat 2D footage in post and keyframe camera movement animations.

Why not just use the old version of Insta360 Studio with ONE X footage? Well, for a start it doesn’t support FlowState stabilisation. And FlowState really is incredible. If you were just watching back the stabilised footage, you’d really think you were watching an action camera on a gimbal. The first time I saw the results in action, I was just blown away. But the older Insta360 Studio also doesn’t support 360° footage larger than 4K, and the ONE X shoots 5.7K. 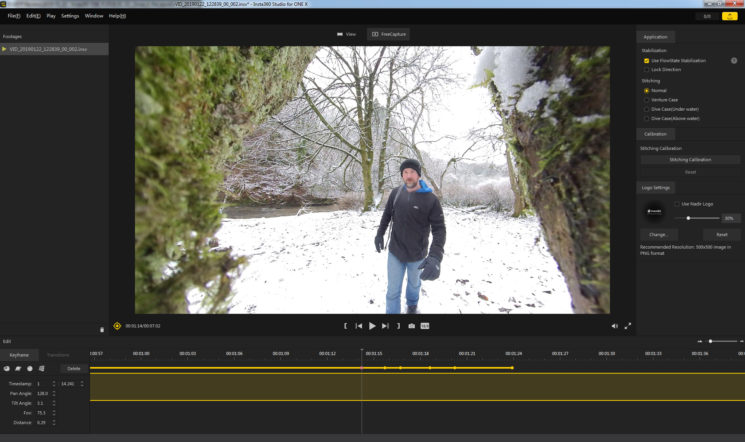 A sneak peek from our upcoming Insta360 ONE X review

So, up until now, if you wanted to get those animated keyframe camera movements on the desktop, you’d have to export the camera’s 5.7K footage out of the Studio for ONE X beta as 4K. Then bring that 4K footage into the old version of Studio to animate it and then export out your final footage. It’s been a pain of a process and results in a fair amount of detail loss due to the intermediary drop in resolution and extra compression involved with adding that extra export step.

But now that Insta360 ONE X Studio is out of beta and has finally been released, you can minimise those compression issues and work with your full size footage, resulting in a rather high detail 1080p flat footage output. Not only can you keyframe the position of the virtual camera in post, but you can also completely change the view. You can bounce from tiny planet to a regular flat camera to a fisheye at will, and have it smoothly animate between them.

Along with 5.7K editing support, the new software also offers support for stitched MP4 files as well as Insta360’s proprietary .insv format. This means it should also support footage from 3rd party 360 cameras in standard panoramic format. There are also presets for transitions and perspectives, as well as drag-and-drop keyframes.

We’ll have our complete review of the Insta 360 ONE X coming up soon (it’s here!), so keep an eye out for that for the full run down. But now that Insta360 Studio for ONE X has reached a final release, it just became a much more useful camera.

You can download the new Insta360 Studio for ONE X from the Insta360 website. And if you want to find out more about what’s new, check out the Insta360 blog.

« Four reasons why it’s nearly impossible to fly a drone in New York City
$10 vs. $30 seamless backdrop for portraits: should you save money on backdrops? »