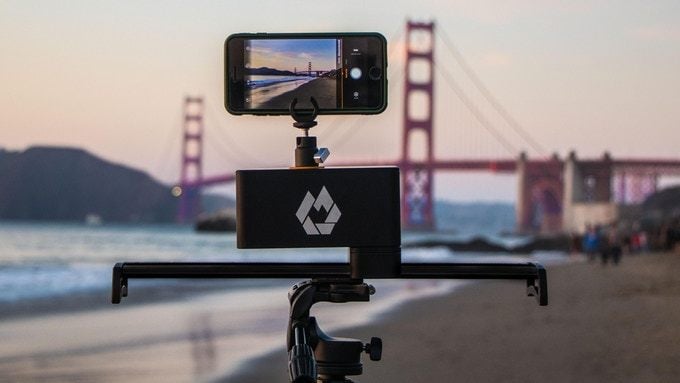 Making a video of cinematic quality doesn’t only depend on the quality of the camera. You can even shoot with your phone if you’re on the budget. But, you may want to add movement to your footage to make it look more professional. InMotion is an automated slider aimed particularly at those filming with smartphones. Additionally, it can support action and mirrorless cameras if that’s your preferred gear. In either case, it promises to provide you with “Hollywood quality content” without breaking the bank.

The slider is still in the Kickstarter funding phase, but as I write this, it has almost reached the goal. It comes with a universal mount for smartphones, mirrorless and GoPro cameras. If you’re looking for something which supports DSLRs too, you can check out the ROV slider.

The designers of InMotion also promise 36 more field of vision than typical sliders, due to its panning mechanism. Just like the phones and cameras it supports, this slider is lightweight and portable.

The slider is to be used with InMotion Mobile App and here are some of the features:

As for the specs of the slider itself, this is what it will contain, according to the description:

I’m not that much into filming (especially not with my phone, because it sucks). But judging from the preview and specs, this seems like a nice little gadget to add a new dimension to your phone footage. The “early birds” can get InMotion for $247 and $267. If you don’t catch this offer, you’ll be able to get it for $297. As for the availability, it’s still a bit far: the estimated delivery date is June 2018. But if you’d like to pledge for this project now, or find out more, check out their Kickstarter page.

How and why adding movement will improve your travel videos