With the lack of trade shows this year, Cinema 5D has taken to hosting an online virtual show this month, allowing companies to show off their new product announcements. It looks like some of those announcements are coming a little earlier than the live streams expected to begin on April 20th.

One of the first announcements is the new SpiderCrab quick-release magic arm from iFootage. Magic arms have been a staple for photographers and filmmakers for years, allowing them to attach things to other things. But they’ve usually just screwed or bolted onto the thing at each end. The SpiderCrab offers a way to be able to quickly swap out devices that looks pretty handy.

Cinema5D spoke to Madison Lee from iFootage to get a sneak peek at the new SpiderCrab arms. With metal arms, the SpiderCrab is available in two sizes, 7″ (18cm) and 11″ (28cm). The arms themselves are made from metal, and like most magic arms, they have a single giant knob that locks the middle and both ends tight simultaneously.

What makes the SpiderCrab special though is that instead of the usual thread or clamp on each end, there are quick-release mechanisms which allow you to easily add or remove equipment on your camera rig. 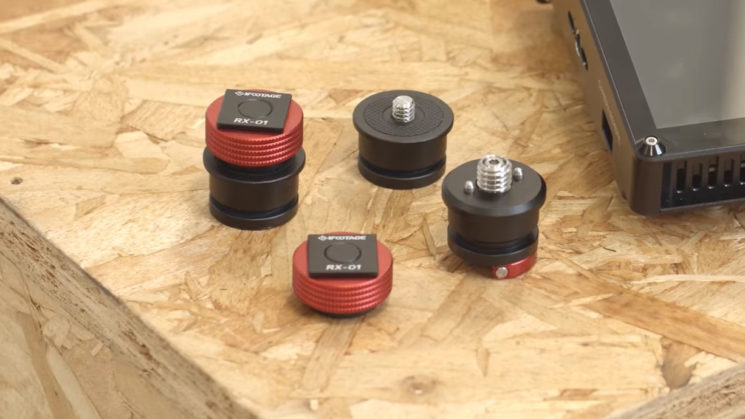 At the moment, quick releases are available in just a few styles, including a cold shoe adapter and two threaded mount adapters – one of which features just a standard 1/4-20″ thread while the other has a dual 1/4-20″ and retractable 1/8-16″ thread with Arri locking pins to ensure that whatever it’s connected to doesn’t accidentally spin around and work itself loose.

Mr Lee mentions in the video that they are also considering a claw-like clamp for attaching it to things like tripod legs. Hopefully, they’re also considering one for NATO rails. Yes, I realise that NATO rails are kind-of quick-release already, but it would mean having to carry yet another arm that already has the NATO rail attachment on it – and it wouldn’t have a quick-release like this on the other end for your monitor or whatever other devices you wanted to attach to it.

It’s a very cool idea and one that I can see being very useful in my own rigs, especially on location, where I’m regularly switching my camera between a tripod, gimbal, slider or going handheld. Being able to add or remove individual components with just a quick-release lever instead of having to screw or unscrew everything the old fashioned way is going to make things run much more quickly between shots.

Has no other company done something like this already?

There’s no word on a price for the iFootage SpiderCrab magic arms yet, although pre-orders are expected to open up in mid-may with deliveries expected around the end of June. Of course, given the current pandemic, this may change depending on the circumstances at the time.