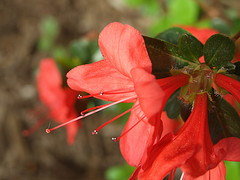 Jake O’Connell has come up with a great Idea to create a Magic Arm. What is a magic arm you ask? (You can have a look at the Bogen Magic Arm or read on). – Yes it is time for another Reader Project.

A magic arm is a photography magical instrument much like a tripod, but with two major differences:

The first difference is that (unlike a tripod) the non camera side of the Magic Arm is equipped with a stud (or a stud socket) which allows you to mount it on virtually anything. (Well the spiderpod also does this, but I wouldn’t place my Nikon D2x on a spiderpod).

Alternatively, you can use the magic arm to mount a lighting device like a flash or a flag.

The second difference is that the magic arm is “pivoted” in the middle, which allows you to bend it here and there and get your gear into impossible angles. 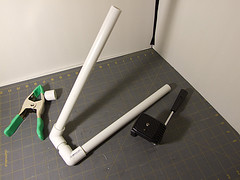 Back to Jake. Jake was inspired by Chase Jarvis’s POV video and his use of a Magic arm (it is a 1.5 minutes must-see video), and decided to come up with a more affordable DIY solution.

The construction is fairly simple and while not as firm as a Manfrotto Variable Friction Magic Arm (don’t try to mount your Nikon D3) it can certainly hold a small flash or a gobo flag.

All you need is some PVC (we just love PVC here on DIYP) glue and a clamp.

– This is an original – I have never seen a DIY Solution for a Magic arm. It can definitely inspire some new gadgets.

– It is great for holding small object like small point and shoot cameras, speedlights, flags and reflectors.

– Man, Jake thought of everything – there are even Velcro attachment straps to replace the accessories.

One thing I think I would have made to improve this great contraption is to create some kind of a break on the angle – maybe using a wire to hold the arm from going over a certain angle.

See the original discussion along with full construction instructions on the DIYP flickr group threads. See all the magic arm pictures here.