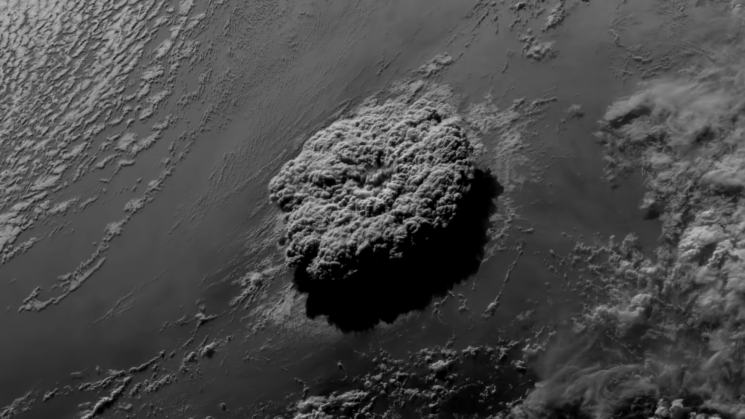 I saw the satellite video on Instagram, shared by a photographer I follow. I immediately wanted to learn more, as the eruption filmed from space looks darn epic. Of course, I knew that it can’t be harmless and wanted to know if people were safe.

As it turns out, it was the Hunga-Tonga-Hunga-Ha’apai volcano that erupted. It’s located about 30 km (18.6 miles) southeast of Tonga’s Fonuafo’ou island, and it caused ash to fall from the sky in Nuku’alofa, the capital of Tonga. According to CNN’s Radio New Zealand (RNZ), the eruption launched a cloud of ash, gas and steam 20 km (12.4 miles) into the air.

Sadly, on Saturday, the eruption caused a tsunami on Tongatapu island where the country’s capital is located. There has been major material damage impacting around 80,000, but there have been no reports of injuries or deaths so far, according to 7News.

Other than Tonga, the massive eruption affected other countries in the Pacific, including Japan, New Zealand, Canada, and the United States. Tsunami warnings have been issued in these countries, advising people to take the higher ground and stay away from the shore and out of the water.

A #Tsunami Advisory means: a dangerous wave is on the way. Strong and unusual currents are expected along the coast, and in bays, marinas, and harbors. Move to high ground and away from the shore. More at https://t.co/npoUHxEZLS. pic.twitter.com/MCLDdN9qPp

The waves between 1.2 and 9 ft (0.5 and 2.7m) were seen in the parts of these countries. There has been some material damage, but it’s too early to give any predictions about the days ahead. Shane Cronin, Professor of Earth Sciences at the University of Auckland, warns that the volcano might erupt again with an even higher force.